Last night, April 15, Queen Margrethe held a Gala Dinner at Christiansborg Palace in Copenhagen, Denmark. This was the first of two gala dinners this week in celebration of Margrethe’s 75th birthday. The second dinner is tonight, on her actual birthday. The first gala was attended by many monarchs (and their spouses) from across Europe. No one from the British Royal Family was there. The gala was a white tie event with tiaras and orders.

The menu consisted of a first course of halibut, herb salad, and scallops and lumpfish roe. The second course had beef tenderloin, pommes rosti, white asparagus and pearl onions, with a sauce of morels and beech hats. The third course had cream cheese flan and pear and truffle vinaigrette. And the final course was birthday cake.

Queen Margrethe wore a gorgeous red gown. I love the skirt and the color but I’m not a huge fan of how busy the top part of the dress is because it conflicts with the business of the brooch and orders. But Daisy still looks great. She wore the Danish Floral Wreath Tiara with the Pearl Ruby Set (necklace, brooch, earrings) from the Crown Jewels. She wore the Order of the Elephant (Denmark). Prince Henrik has the flu and was unable to attend. 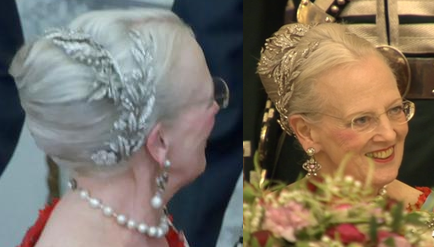 Princess Marie decided she didn’t want to get left out of the All Lace Dress Club and went with a long-sleeved navy lace peplum gown. I’m so sick of peplums and lace. Marie wore the Diamond Floral Tiara, sapphire earrings, and the sapphire, pearl, and diamond brooch she wore last week – which used to belong to Queen Alexandrine – as a necklace. Prince Joachim wore his military uniform. They both wore the the Order of the Elephant (Denmark).

King Constantine and Queen Anne-Marie of Greece attended the gala dinner as part of the Danish Royal Family – Anne-Marie is Margrethe’s sister. Anne-Marie wore a floral patterned gown and Greek Emerald Parure (tiara – with five giant emeralds and diamond E shapes – earrings, necklace, brooch). They both wore the the Order of the Elephant (Denmark). 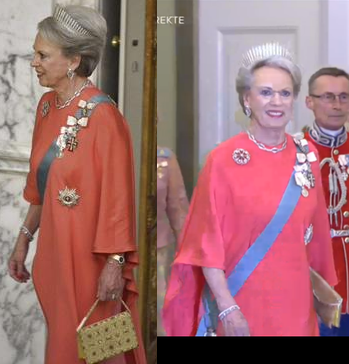 Princess Benedikte was also there in a salmon-y pink flow-y dress which is perfectly acceptable for her but probably wouldn’t work on anyone else. She wore the Sayn-Wittgenstein-Berleburg Fringe Tiara (from her husband’s family) and the Order of the Elephant (Denmark).

Letizia debuted a new tiara: the Ansorena Fleur de Lys Tiara (also called the “Princess” Tiara). The tiara was made by Ansorena in white gold and consists of 450 brilliant cut diamonds, ten Australian pearls, and 3,000 gemstones. The center piece is in the shape of the fleur de lys, which can be removed and used as a brooch. It was supposedly a fifth wedding anniversary gift from Felipe in 2009, though it might have been a gift from the jewelry which might explain why Leti hid it away for six years before finally wearing it. 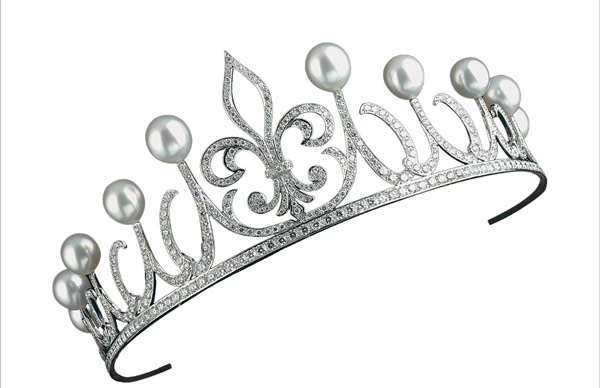 Queen Maxima wore um… black with beading and tiers of fringe. This is not my favorite. Max wore the Dutch Diamond Bandeau Tiara, diamond earrings, and diamond bow brooch. Both she and King Willem-Alexander wore the Order of the Elephant (Denmark).

Queen Silvia wore pale pink and a furry jacket. She wore the Leuchtenberg Sapphire parure (tiara, earrings, necklace). Both she an King Carl XVI Gustaf wore the Order of the Elephant (Denmark).

King Harald of Norway was there. He few solo.

Danish Prime Minister Helle Thorning-Schmidt was there. She wore a very similar dress to Crown Princess Mary. Is it bad that I like Helle’s dress better?

Best dressed for the night, for me, were: Helle Thorning-Schmidt, Crown Princess Mary, and Queen Mathilde.