Royal Round Up: Triple the tiara appearances & double the York princesses

This royal round up features three separate tiara appearances (one that barely makes the count as royal, but whatevs) and two different York princesses. Queen Mathilde and Crown Princess Mette-Marit were out and about at State Banquets while Princess Beatrice was doing the charity thing and Princess Eugenie was attending a service at Westminster Abbey.

On October 11, King Philippe and Queen Mathilde were in Japan for a State Visit and attended a State Banquet hosted by Emperor Akihito and Empress Michiko.

Mathilde wore an orange gown with beading which was a nice backdrop for the Order of the Precious Crown (Japan) sash and star. Mathilde wore the Wolfers Necklace Tiara. 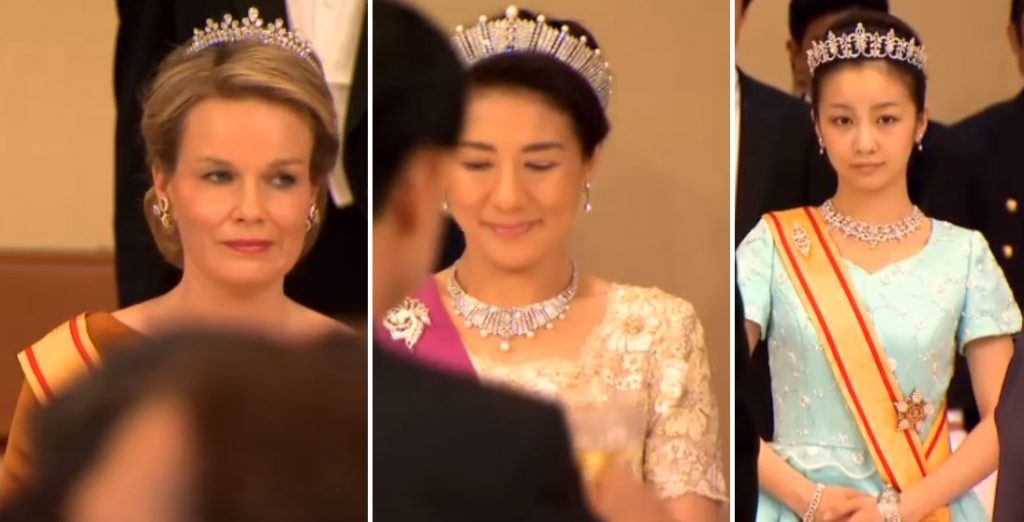 Norway hosted the President and First Lady of Singapore for a State Visit with a State Banquet on October 10.

The tiara appearance that barely counts as royal is a bridal tiara worn by Albanian actress Elia Zaharia as she married Leka II of Albania, who is the current head of the House of Zogu.

In 1928, the then head of the House of Zogu, Zog I, proclaimed himself King of the Albanians. Zog I first served as Prime Minister of Albania from 1922–1924 and then as President from 1925–1928 when he proclaimed himself King. He ruled Albania until 1939 when he was deposed by Victor Emmanuel III of Italy and the Italian invasion.

Zog was forced into exile just two days after his son, Crown Prince Leka of Albania, was born. Zog died in 1961 and since then Leka was known as King Leka I even though there was no longer a King of the Albanians. Leka I returned to Albania for the first time since he was a few days old in 1993. He returned again in 1997, the year of the Albanian civil war, when there was a referendum concerning a restoration of the monarchy, which was rejected. Leka I fled in 1997 but did return years later and died in 2011 in the capital city of Tirana.

Since Leka I’s death in 2011, his son, Leka II, is head of the House of Zogu. He’s known at the Crown Prince of Albania, but to some people he’s called King Leka II.

So with all that backstory out of the way, Leka II and Elia married in Tirana, Albania on October 8.

So what tiara did Elia wear to marry the grandson of the first and only King of the Albanians? Why a rams head one, of course! Elia wore a diamond and sapphire tiara featuring the Ram of Skanderbeg as a centerpiece for the diadem. The Ram of Skanderbeg is a national symbol of Albania modeled after the ram-shaped helmet of Gjergj Kastrioti Skanderbeg, a prominent military figure in the history of Albania.

It’s an interesting look for a tiara, but I like it much better than the wedding gown.

Princess Eugenie was at Westminster Abbey on October 12 to attend a service to commemorate the work of William Wilberforce and mark the United Kingdom’s commitment to combat modern slavery. She laid a wreath during the service.

Eugenie was also at the VIP private view of the Frieze Art Fair 2016 in Regent’s Park on October 5.

Princess Beatrice followed in the footsteps of Prince Harry and Prince William and Kate Middleton by traveling through Nepal, India, and Bhutan. Bea spent 9 days traveling by car through the three countries with the team from the Franks Family Foundation (FFF) doing charity work. You can read about Bea’s trip here, here, and here.

Another one from the Eye Hospital in #Kalimpong with @SimonFranksUK – they're doing remarkable work: giving people back their sight pic.twitter.com/vObnZW2fjR

Last night with team. After 9 days travelling through Nepal, India and Bhutan by car – our mission is done! #drruit https://t.co/7zcjzUTTs7 pic.twitter.com/ZjjQCnOxg3

After swimming 3,300m biking 140km, running a half marathon and hiking up mount Etna I finally made it. @strivechallenge @bigchange_ pic.twitter.com/ty2nuci4M4

Bea spoke with the Press Association afterward. You can hear her speak in the video below. Bea’s part is over by 1:06. She seems pretty confident speaking to the press on camera. She needs to give Kate lessons.

I kind of wish the York girls were able to be working royals. I think they’d be good at it.

63 thoughts on “Royal Round Up: Triple the tiara appearances & double the York princesses”