Last night, October 18, Queen Elizabeth and Prince Philip hosted a reception at Buckingham Palace for Team GB and Paralympics GB Rio 2016 medalists. They were joined by Prince William, Kate Middleton, Prince Harry, Prince Andrew, Princess Anne, the Duke of Kent, and the Duke and Duchess of Gloucester. Princess Eugenie was scheduled to attend, but she pulled out for an unknown reason. Also skipping the reception, some of the biggest names from the Olympics: Mo Farrah, Bradley Wiggins, Jessica Ennis-Hill, Jason Kenny, and Laura Trott. 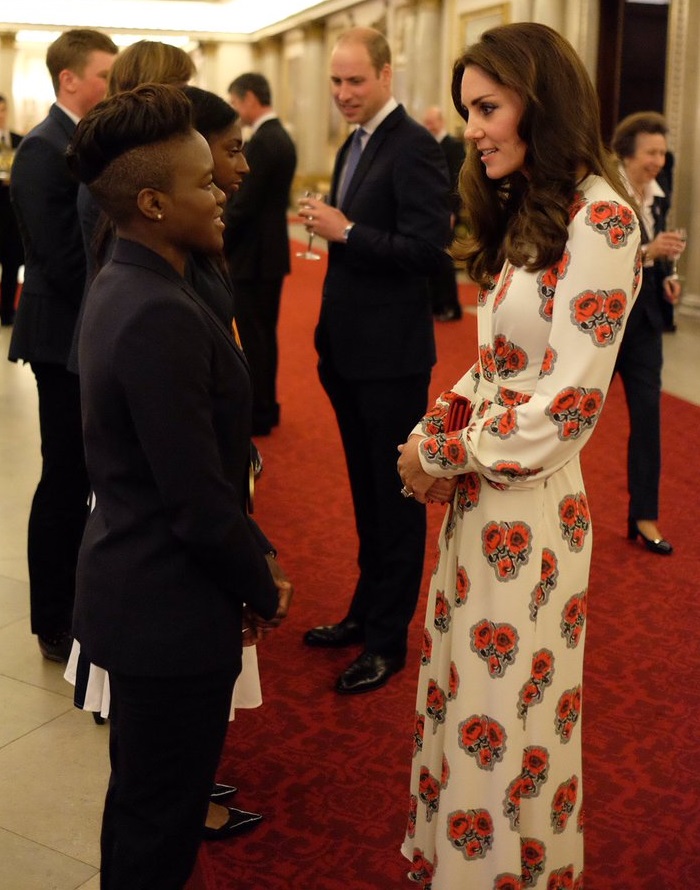 Team GB had their best-ever Olympics in Rio, winning 27 gold medals among their 67 medal total (two more than they won in London 2012), while the Paralympics team won 64 golds out of their 147 total.

Among the gold medalists that Kate met was triple gold medalist Equestrian, Natasha Baker. Kate spoke to her about Prince George and Princess Charlotte. From the Express:

Kate said: “George is fascinated by fencing but I think that’s because of the face shields. Charlotte would have loved to be here but she’d be running riot!”

Afterward, Baker said: “I asked her how the children were and she said Charlotte is really enjoying her riding which is great to hear and I said we may see her here on a line-up in 20 years time. She emphasised that Charlotte has this passion about horses and although she doesn’t echo it, she’ll do her best to champion and encourage it.”

There is so much to unpack here!

First, George and fencing. I don’t necessarily think this is a lie; I can believe that George was “fascinated” by the fencing. Kate didn’t say that George “loves” fencing, just that he was “fascinated” by it. So Kate was watching fencing on TV and George stopped doing what he was doing to watch it with her. Sure. He was fascinated by the fencing. That doesn’t mean he cares about, just that it was fascinating for that moment. I watching speed walking during the 2012 Olympics because I was fascinated by it for that moment; I’ve never watched it again.

Ugh at the “Charlotte would have loved to be here” line. Kate did this many times during the NZ/Oz tour, where she claimed she would have loved to have brought George to whatever non-child friendly engagement they were at, but he “just fell asleep” or whatever line she kept using. We all know that you weren’t going to bring the kids to these engagements, Kate; just stop.

Charlotte having a “passion about horses”… I went back and reread my post about the children’s party in Canada because I didn’t remember seeing photos of Charlotte with the horses there. But one of the quotes from the girls in charge of the miniature horses was: “Charlotte bent down and was hugging Honey so much and hugging her neck, it was the sweetest most adorable thing ever. She also petted TC a lot. Charlotte seemed to really love the miniature horses.” So I believe Kate when she says that Charlotte loves horses, because there is evidence of that.

Charlotte “enjoying her riding”… I ride horses, I was in 4H, I know many people who were put on horses from a very young age (I’m talking months, not years) and who have loved horses and riding from a very young age. And I know people who now have kids and are doing the same with their kids. So I can believe that Charlotte is riding horses and enjoys it. Is she riding by herself? Of course not. If she is riding, it’s with the help of someone else: either 1) someone is holding her while she sits on the horse and another person is leading the horse around; or 2) someone is holding her in front of them while they ride. It’s totally possible that Charlotte is riding horses already – her age is not a problem.

UPDATE: Here’s a photo of Charlotte riding a horse at the children’s party in Canada that I’ve never seen before. So yeah, Charlotte rides horses.

The most fascinating thing from Baker’s quotes is actually the admittion that Kate doesn’t like horses. Why lie about being allergic to horses? Why agree to take riding lessons from an Olympic Equestrian and have Sophie lie about your allergies for you? Why not just say you don’t like horses?

Kate going to “champion and encourage” Charlotte’s passion for horses even though Kate doesn’t like horses… I mean, yeah, that’s called being a good parent. I just hope that encouraging their children’s choices thing applies to all of their life choices and not just the easy, gender-stereotypical ones. Like, if Charlotte wants to become a scientist or if George wants to dance, William and Kate should still encourage them. Or if either of them are gay, William and Kate should still encourage them. As for the exact wording of “although she doesn’t echo it, she’ll do her best to champion and encourage it”, that was Baker talking. Baker paraphrased what Kate said; that was Baker’s choice to state it that way. 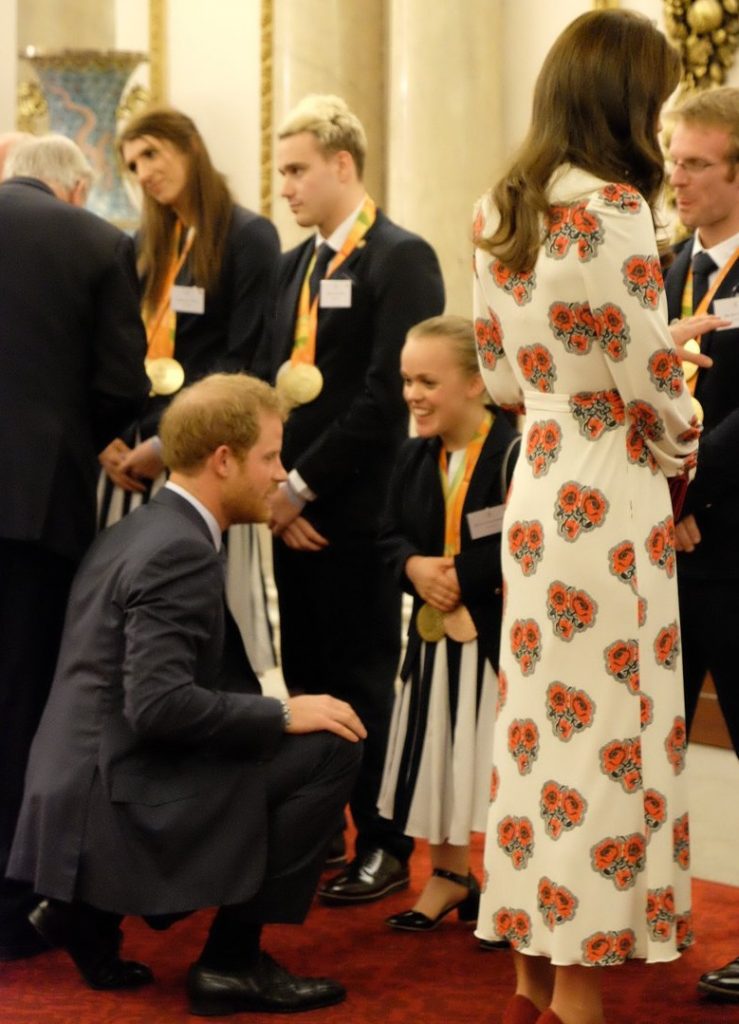 Swimmer Ellie Simmonds spoke to Kate and Harry. Of meeting them, she said:

“It was the first time I’d met Harry and he gave me a hug. I must have mentioned to someone I was really looking forward to meeting him and he just hugged me! The duchess was telling me how George likes swimming and Charlotte loves horses.”

With the George likes swimming comment, yeah we’ve heard that a lot over the last three years. Kate takes George swimming at the Buckingham Palace pool, and she said back in 2014 that George loves the water.

Harry had some fun with the women’s hockey team.

Goalkeeper Maddie Hinch said: “Prince Harry described me as a crab and was impersonating me! He’s big on the banz and the banter. He’d definitely fit into our team and in the locker room!”

Here’s a video of that:

Alex Danson of the women’s hockey team said: “Kate and William both said they played hockey at university. She (Kate) said George has picked up a polo stick and she’s trying to show him to use it as a hockey stick.”

In the video below, at about 0:16, William says something about Kate “bounding in” when she saw the women’s hockey team. I can’t make out the rest of what he says. Sophie, Countess of Wessex is Patron of England Hockey. How much do you think that kills Kate? Kate loves hockey; if she were Patron of England Hockey that would probably be the patronage she’d visit most.

The Duke and Duchess of Cambridge and Prince Harry welcome the @TeamGB and @ParalympicsGB medallists to Buckingham Palace! #GBHeroesLDN pic.twitter.com/XFKUlojyRT

Here’s another video of William and Kate meeting the women’s hockey team, just after the “bounding in” comment. I want to draw attention to it because I find it very interesting. I’ve commented before that Kate speaks so freaking quietly that I can barely make out what she says in videos, and I find it fascinating that the energy of the entire group (William, Kate, and the hockey team) changes from when William is speaking to when Kate is speaking. They were all lively and upbeat when William was speaking, and then went very quiet when Kate was speaking. I’m wondering if that is because William is louder and Kate is so quiet, so when Kate starts speaking everyone has to shut up in order to make out what she’s saying. I don’t know, but she sure brought the energy down.

William and Kate talk to the @TeamGB women's hockey team – and tell them George is showing an interest in the sport pic.twitter.com/7d63YWYJVr

The Queen wore a really beautiful teal dress with the Jardine Star Brooch. She joked around with the women’s hockey team about Susannah Townsend‘s injured knee.

Here’s the The Duke and Duchess of Gloucester and The Duke of Kent.

The Duke and Duchess of Gloucester and The Duke of Kent meet the @TeamGB and @ParalympicsGB medallists at Buckingham Palace #GBHeroesLDN pic.twitter.com/YzKX0dxWFS 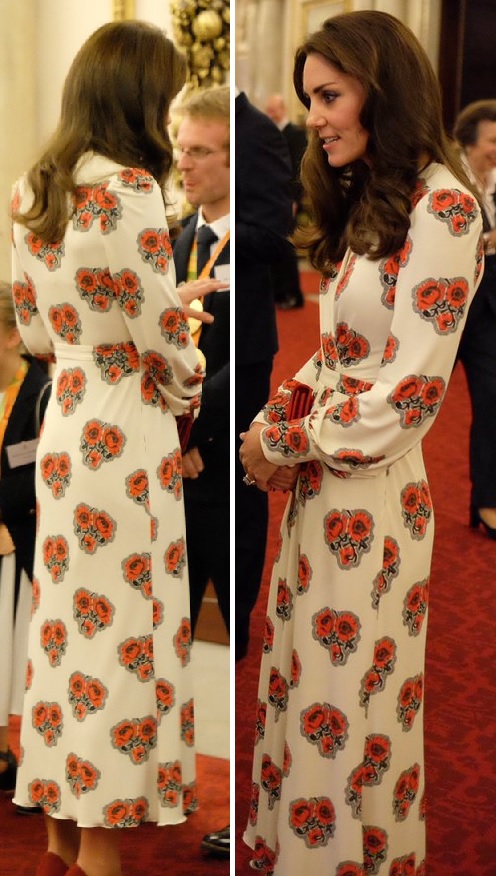 Kate wore a new dress for the occasion. She’s really into florals lately what with that Kate Spade last week and now this. This is a new dress from Alexander McQueen. It looks to be a bespoke version of the Poppy Print Open-Back Midi Dress ($3075.00) from the pre-Spring 2017 collection. This print also comes in a shirt. 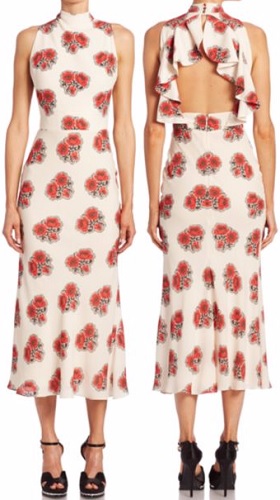 Kate’s version has a v-neck, closed back, defined waistband, and full sleeves. It’s very 70s. I don’t like it, to be honest with you. I don’t actually mind the silhouette of the dress – both Kate and Mary have worn this same silhouette before and I’ve liked it on them – but I hate the print. It’s too wallpaper for me. If this dress had been all one color, I probably would have really liked it.

There weren’t a lot of photos, but here are a couple more.