Hats and tiaras for Ascot and Waterloo

While the Queen and other members of the British royal family attended the second and third day of Ascot, Prince Charles and Camilla, Duchess of Cornwall were off commemorating the 200th anniversary of the Battle of Waterloo with the Benelux royals.

Let’s start with the Battle of Waterloo commemorations, since the defeat of Napoleon is a tad bit more important than horses and hats. The Battle of Waterloo was fought on June 18, 1815 near Waterloo in (present day) Belgium between Napoleon’s French army and the armies of the Seventh Coalition lead by the 1st Duke of Wellington and Gebhard von Blücher. The defeat of Napoleon at Waterloo ended his run as Emperor and ushered in relative peace, technological progress, and changes to the landscape of Europe.

Royals gathered in Belgium on Wednesday, June 17, to kick off the commemorations. King Philippe and Queen Mathilde met with descendants of the “Warlords” as Getty called them AKA the commanders of the armies who fought at Waterloo. I went down the internet rabbit hole trying to Id all of the people in the photo, and couldn’t, so instead I’ll just mention a couple of them: Hereditary Grand Duke Guillaume and Hereditary Grand Duchess Stephanie (back row middle); Jean-Christophe, Prince Napoleon (front row left; a descendant to Napoleon I, though not a direct descendant); Earl and Countess of Mornington (front row right; the first son of the current Duke of Wellington, and his wife), Lord Frederick Wellesley (back row left; second son of the current Duke of Wellington).

Prince Charles and Camilla, Duchess of Cornwall were also in Belgium on June 17 and joined Belgium’s Princess Astrid and Guillaume and Stephanie for a re-opening ceremony of Hougoumont.

Earlier, Charles and Camilla visited Hougoumont Farm – one of the sites of the battle. Camilla wore her Royal Lancers brooch. As we know, her father was in the 9th/12th Lancers regiment during WWII. 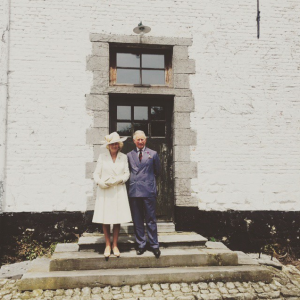 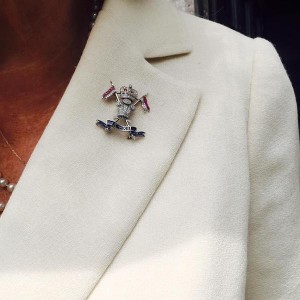 Over in London, Charles, Camilla, and Prince Edward attended a Service of Commemoration at St Paul’s Cathedral to mark the 200th anniversary of the battle. Camilla wore Anna Valentine.

For the Royal Ascot photos, I’m just going to focus on the ladies who attended the races. Day 3 of Royal Ascot is Ladies Day, and the Queen wore pistachio Angela Kelly and her Shamrock Brooch. Princess Anne also attended.

Sophie, Countess of Wessex attended wearing an Alice Lee dress and Jane Taylor hat along with her pearl cluster earrings and brooch she’s been favoring lately. Princess Beatrice wore a hat by Laura Apsit Livens, a white “Seraphina” trapeze dress by Beulah London, and carried a bag with her name on it. Princess Eugenie wore a teal dress with colorful geometric patterns.

Ascot day 2 – The Queen wore blue Karl-Ludwig Rehse and matching Angela Kelly hat, along with a sapphire and diamond brooch given to Queen Victoria by Prince Albert. Anne looked really nice in her white dress and brown accents.

74 thoughts on “Hats and tiaras for Ascot and Waterloo”