There is a feature in the June 29th edition of Star magazine of photos of Prince George playing with Kate Middleton, Duchess of Cambridge, while watching Prince William‘s polo match last Sunday. The feature also includes two photos of George with Nanny Maria seeing off Prince Harry as he leaves in the royal helicopter (the photo below). Star claims the photos were taken on June 12, but Harry did not have any engagements that day. Most likely the photos were taken on June 11, when Harry went to Staffordshire for the Camp Bastion Memorial Dedication Service. I thought at first it was Kate in the photo with George, and I thought, “Kate looks good in a plain white button down and non-skin tight pants; I wish she’d wear that to casual events”. Then I realized it was Nanny Maria.

Keeping in Prince George land, the Daily Mail claims George is left-handed (just like William). A “source who knows the couple well” says: “Young children can use both their hands but George seems to be very left-handed. More often than not, he uses his left hand to hold things and both William and Catherine have noticed this. William is thrilled his son has inherited this trait.” The article goes on to list a bunch of well known historical figures who were left-handed. Basically the article is another sugar piece about how George is the Most Special Snowflake out of all the Special Snowflakes because he is so intelligent and advanced. They use the below photos as evidence.

Overit brought up these photos in the comments of William and Kate talking and gesturing with their hands. Are they arguing? Kate’s face and gesture seems more like arguing than William’s face and gesture, but I don’t know. I could see it be arguing, and I could also see it not be arguing and just a discussion with hand gestures. Without a video I can’t really tell for sure.

Then theirs also this picture of William playing with Kate’s hair which seems to be taken during the same time frame. I don’t know what order these photos go in.

Along with it being Father’s Day, it is also William’s birthday. He is 33 years old today. Keeping with William, there is an article about the upcoming release of the royal finances, and about Prince Charles’ airfare costs. I’ll talk more about that later, but I want to mention this little tidbit tacked onto the end of the article that is supposed to make William seem frugal while making Charles look bad.

“[Prince Charles’] spending on air fares is in direct contrast to his son William, who often takes scheduled flights. Last December, he travelled to New York with his wife Kate on a scheduled British Airways flight, while the pair also flew to Mustique for a family holiday in February aboard a commercial aircraft.

“In May last year, William chose to fly economy class on an American Airlines flight from Memphis to Dallas as he returned home from a friend’s wedding.”

Yes, William flies on scheduled first class flights for official duties, goes economy when he has to pay for it himself, and then takes the royal helicopter 80 miles because he doesn’t want to have to get up an hour and a half early in order to go by car. Yep, William sure is thrifty.

Want to see a crazy headline I saw in the supermarket? William and Kate are totally moving to the Hamptons in July… according to OK magazine. Yeah, no. 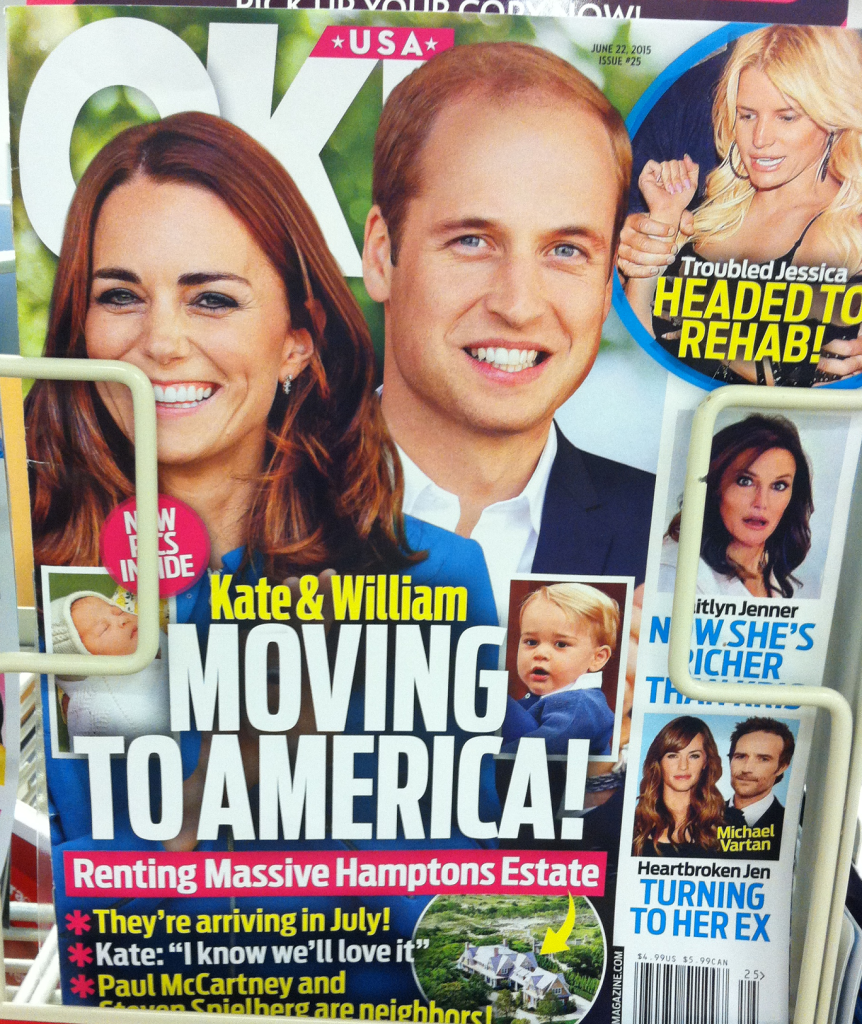 On Friday, June 19, Prince Harry officially ended his time in the army. Harry will spend the next three months working in Africa.

“The programme will cover a variety of activity in Namibia, South Africa, Tanzania and Botswana. Prince Harry will learn about environmental education programmes… [and] will spend time working with experts at the sharp end of wildlife protection. He will join a team of rangers who are the first to respond to reports of poaching attacks on elephants and rhino. He will for a time work alongside some of the world’s leading veterinarians… And he will also work with park managers to learn about new technologies being used to enforce site protection.

“Wherever possible, Prince Harry will be fully embedded with the conservationists and front-line staff he will be working alongside, including living in the same accommodation.”

A source says: “They were really close. Harry was happy she could make it. They were laughing and seemed into each other.”

A second source says they are just banging for now and that it’s not serious: “They’ll never be anything serious because of their schedules. He’s off to South Africa and she’s going to be filming Doctor Who in the States. But, for now, they’re just enjoying each other’s company.”

First thought: Doctor Who is filming in the States?!?!?!? Why? Are they going back to Lake Silencio?

Second thought: I hope they get rid of Clara after this season. I’m so sick of her. I liked her at first, but now she’s utterly annoying. Sorry, Jenna (not Louise) Coleman, you’re pretty, but your character is awful. Please leave. You can have Harry, just get off Doctor Who.

Third thought: I wonder what happened between Jenna and Richard Madden. They were dating, and she accompanied him to several Cinderella premieres in March. But then Jenna got flirty with Harry. Jenna’s publicist wanted to make it clear she was not cheating, saying she and Madden split months ago. But that US article claims Harry and Jenna actually have known each other for a while, and did not meet for the first time at that polo match. Hm… I wonder if there was any homewrecking going on. 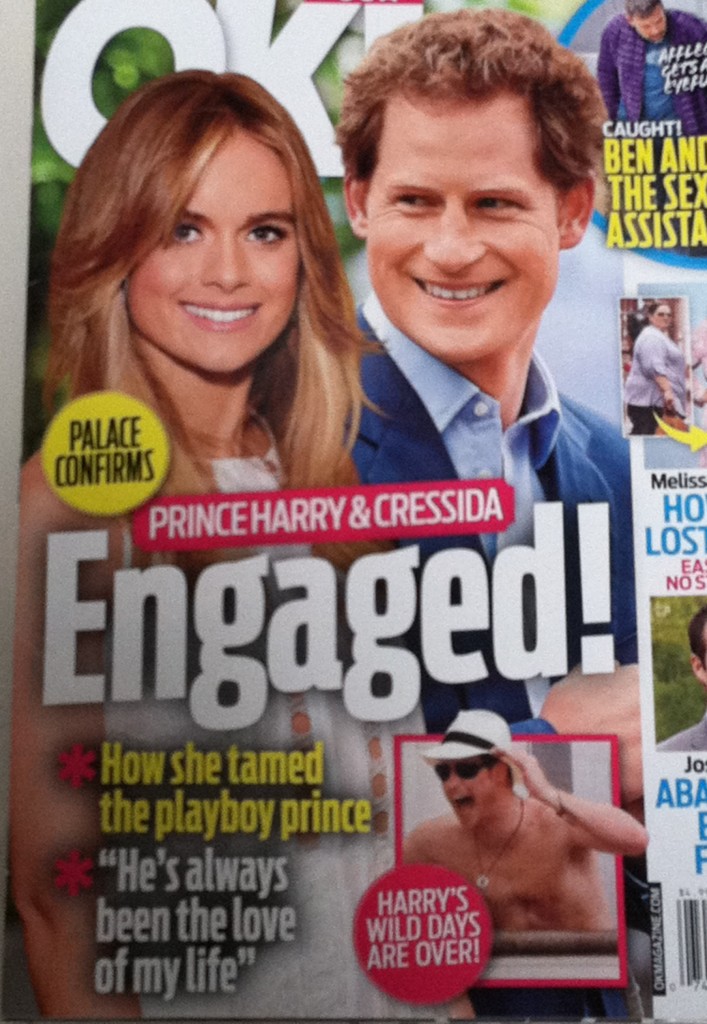 June 19 was Crown Princess Victoria and Prince Daniel‘s 5th wedding anniversary (the above photo is from the pre-wedding reception on June 18, 2010), and to celebrate their anniversary, Daniel commissioned Marie Louise Kold to create an artwork of Princess Estelle as a gift to Victoria. So cute. Happy (belated) anniversary to Victoria and Daniel!

Prince Daniel commissioned an artwork of Princess Estelle as an anniversary gift for his wife pic.twitter.com/uTnzGHBKoT

MORE Ascot photos! The Queen wore yellow for day 4 of Ascot, choosing to forgo Angela Kelly all together and instead opting for a Stewart Parvin dress and coat and Rachel Trevor Morgan hat. HM wore the Botswana Flower Brooch – a gold and diamond brooch in the shape of a spray of sorgum or millet (the main crop of Botswana) given to HM by the President of Botswana at the Commonwealth Heads of Government Meeting in Kampala in 2007. On day 5, HM wore a peach/apricot Stewart Parvin/Rachel Trevor Morgan combo and the Three Thistle Brooch.

The rest of the Ascot photos are from day 4. Zara Phillips made a return, looking much better in this navy and white Paul Castelloe outfit than she did in the yellow one that led to some unfortunate rumors. Princess Eugenie was also in attendance for day 4. Speaking of Eugenie, she had a huge birthday bash (though her actual birthday is in March) last night at her father’s home in Windsor. There are also reports that she has quit her US job for one in the UK. Photos of some arrivals at the Daily Mail.

The whole York family came out for Ascot day 4. Joining Eugenie were Princess Beatrice and her Male Waity boyfriend, Dave Clark, and her parents, Prince Andrew and Sarah Ferguson.

Queen Maxima was out and about in the Netherlands on Friday, June 19, to open the Design Derby in Rotterdam. One of the exhibits she looked at was the blue felt plants designed by Wandschappen Ivo van den Baar and Nicole Driessens. Max paired a burgundy dress and hat with orange shoes, gloves, clutch, and necklace. I love her commitment to wearing orange.

Princess Charlene attended the 55th Monte Carlo TV Festival on Saturday, June 13, and Wednesday, June 17. On June 13, Charlene wore black and some beautiful ruby and diamond earrings. In the photo above she is posing alongside the cast and creator of the show Empire.

On June 17, Charlene and Prince Albert attended the Monaco Palace cocktail party during day 5 of the festival. Charlene wore a long white dress with pockets on the boobs. I’m not a fan of the boob pockets, but the diamond earrings are great.

Queen Mathilde was in Milan, Italy the night before Carl Philip and Sofia’s wedding. Mathilde was attending the Expo 2015, visiting the Belgium pavilion. She looks really nice here.

Photos: my own snaps of Star and OK / Getty

55 thoughts on “Royal Round Up: George, Harry, Ascot, Maxima, Charlene, Mathilde, and more”