This Royal Round Up features Queen Letizia. Letizia keeps herself busy, so in the three weeks I have not covered her, I’ve missed a lot. Upcoming Letizia events: all this week she will be in Honduras and El Salvador, and from June 2-4 she and King Felipe will make a State Visit to France – which is a make up for their March visit that was cancelled (tiara?). 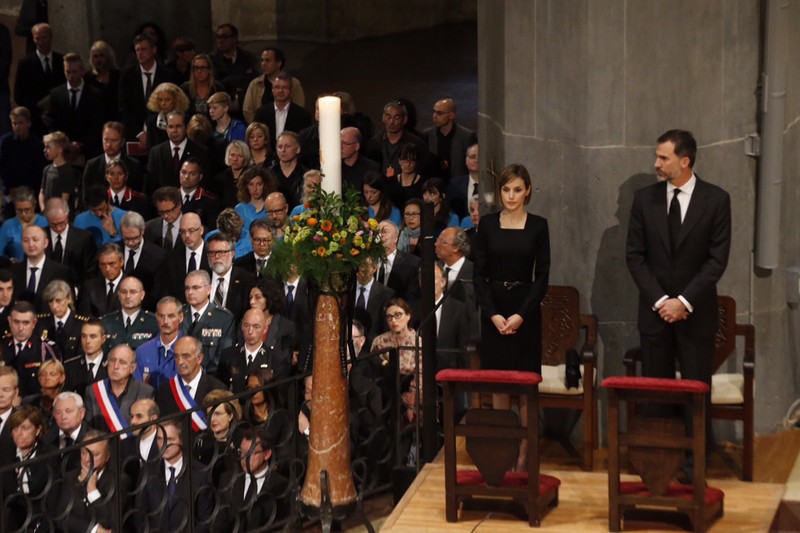 Felipe and Letizia attended an memorial service at the Basilica de la Sagrada Familia for the families of the victims of the Germanwings plane crash which took the lives of 150 people. The Catholic ceremony was attended by Jewish, Muslim, and Protestant representatives. Letizia wore black, of course. 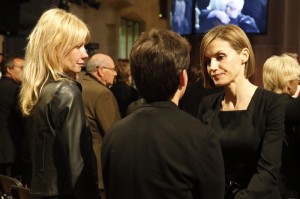 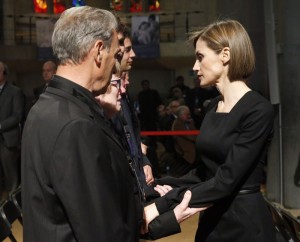 Letizia and Queen Sofia attended the Reina Sofia Awards 2014 Royal Board on Disability. Letizia wore a Felipe Varela light pink wool skirt suit with lace blouse underneath – which is a repeat from 2013. She wore Magrit pumps and clutch, and Yanes flower blossom earrings and ring. This outfit is very “ladies who lunch but also do business”. 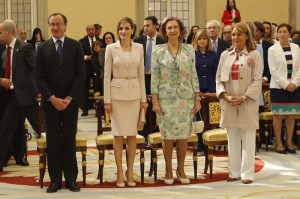 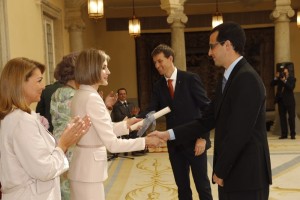 Letizia held audiences at Zarzuela Palace, including the presentation of the “Tomas Francisco Prieto Award 2014” to D. Jaume Plensa, and presentation of diplomas to students of III Promotion of Media Masters in Graphic Print, Illustration and Artistic Coinage. Letizia wore that bespoke Felipe Varela tweed dress she debuted in France in March before the visit was cancelled. She carried her Felipe Varela blue leather clutch and wore her Magrit nude patent pumps. She wore new TOUS blue hydrothermal quartz and amber earrings. 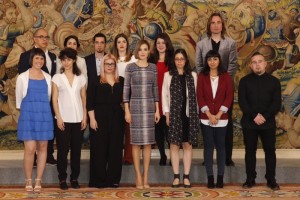 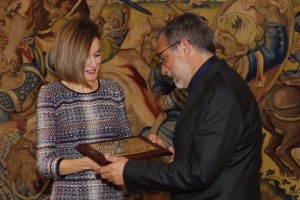 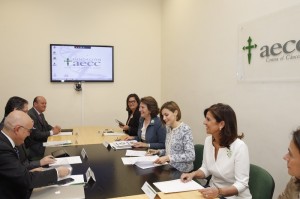 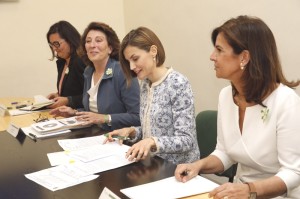 Letizia attended a Spanish Association Against Cancer (AECC) meeting as honorary president of the organization. She attends these meeting fairly regularly. The topic of discussion during the two hour meeting was to design the Strategic Plan of the Scientific Foundation of the AECC 2014-2020 counting on the valuable contributions of Spanish scientists of international renown. Letizia wore all repeated pieces: Mango blue “Ethnic Fabric Jacket” ($129.99); white blouse; Hugo Boss trousers; Links of London Hope Egg earrings; Navy pumps. 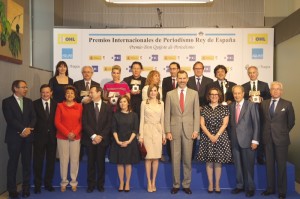 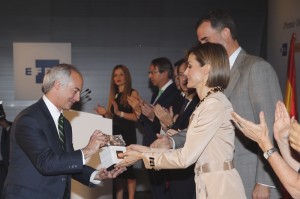 Letizia and Felipe attended the International Journalism Awards where they presented the XXXII “King of Spain” International Journalism Awards and XI “Don Quixote” Journalism Prize. The awards recognize the work of professional journalists of Spanish and Portuguese languages. Letizia wore a Felipe Varela jewel encrusted beige trench coat previously worn in February 2014, Magrit nude patent leather pumps, and a burgundy suede clutch. Letizia has a nice earring collection, but oddly enough did not wear earrings to this event. I don’t like this coat, possibly because the color is so close to her skin tone that it all blends in and looks odd to me. 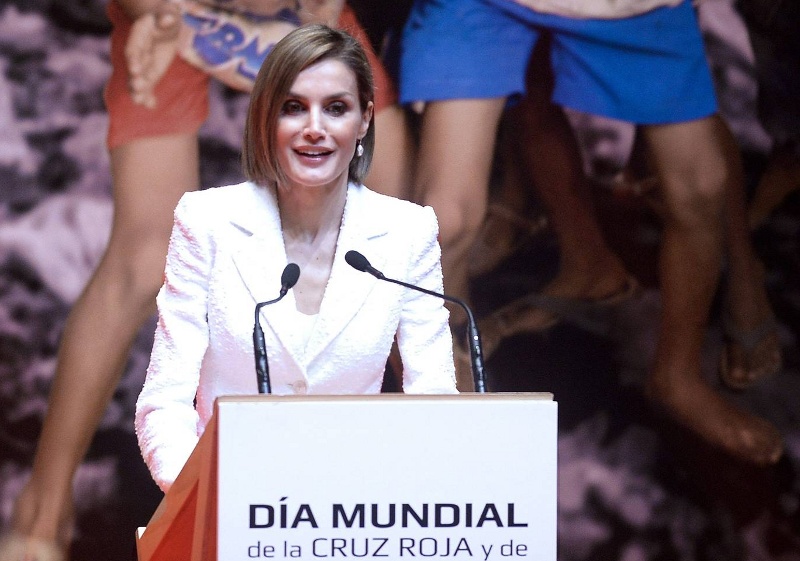 Letizia attended the Red Cross and Red Crescent World Day on May 8 – the birthday of Henry Dunant, founder of the Red Cross. The event highlights the importance of their staff and volunteers, saving lives and assisting vulnerable communities around the world. Leti visited the Spanish Red Cross back in April. Letizia gave a speech, saying in part (full transcript here): “Solidarity, commitment, ease the suffering of others, defend the dignity … This is serious. It is important. It is essential. And it is a requirement that we as a society and as a country, but above all, as human beings.”

Letizia and Felipe welcomed the President of Italy. Letzia wore a navy button-down shirt, Carolina Herrera “Flower Fil Coupe Party Skirt” ($2,490.00), and Carolina Herrera navy heels from the Spring 2015 collection. I really like this outfit. And her hair looks great, too. 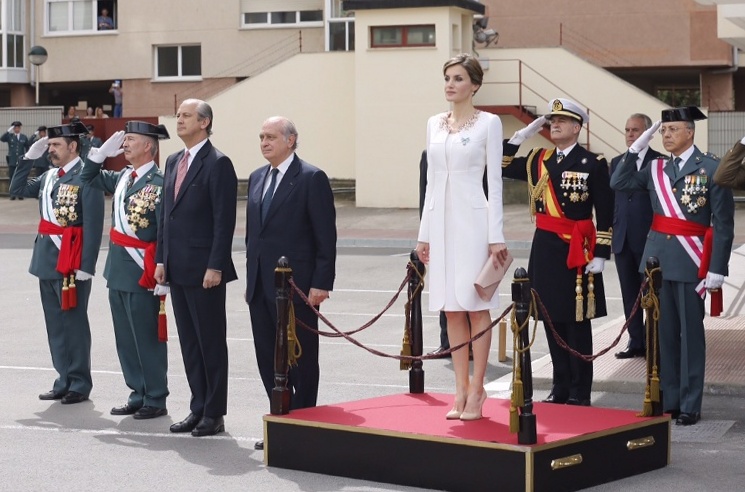 Letizia attended the delivery of the flag to the 11th National Teach Zone of the Civil Guard. Delivery of the flag is a special honor given to certain areas in recognition of the work being done. Letizia gave a speech before delivering the flag.

Letizia said in part (full transcript here): “We must all recognize the value of your work and admirable – and useful – the service that you offer to all Spaniards. […] The flag [given] today… is recognizing the merits of the civil guards. […] I have no doubt that this flag and what it symbolizes, shall guarantee the permanent search for excellence and good work that all who are part of the Civil Guard in contemporary Spain [possess].” 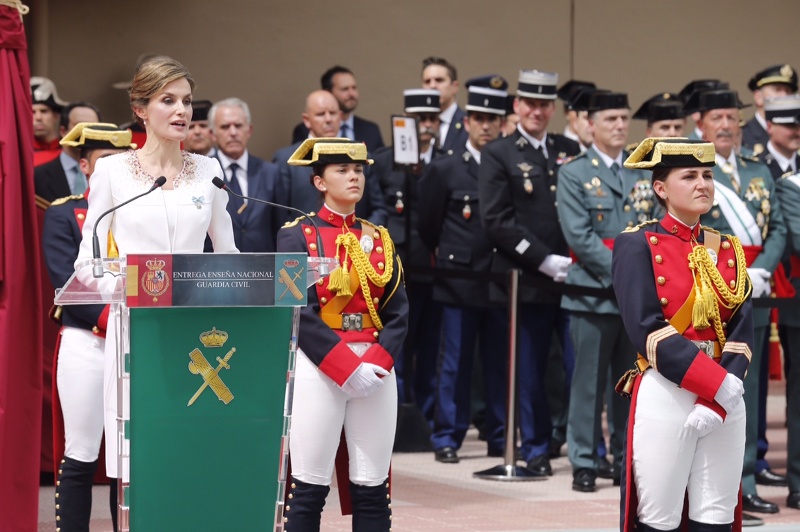 Letizia’s outfit was significant in two ways: 1) She repeated her outfit from Felipe’s proclamation as King; 2) She broke with tradition and wore white. Tradition states that royal women at this event should wear all black with a mantilla and peineta, and full length skirt. Letizia complied with tradition in her Princess of Asturias days. However in her first year as Queen, Letizia switched thing up and broke with tradition.

Letizia wore her Felipe Varela white sheath crepe dress and matching coat which features a neckline of ruby, amber, and amethyst crystal embellishments. She also wore the Commander Dame’s bow of the Order of Charles III. She finished the outfit with her Magrit nude pumps, matching envelope clutch, and pink pearl drop earrings. This outfit is so beautiful, I’m glad Leti gave it a repeat. 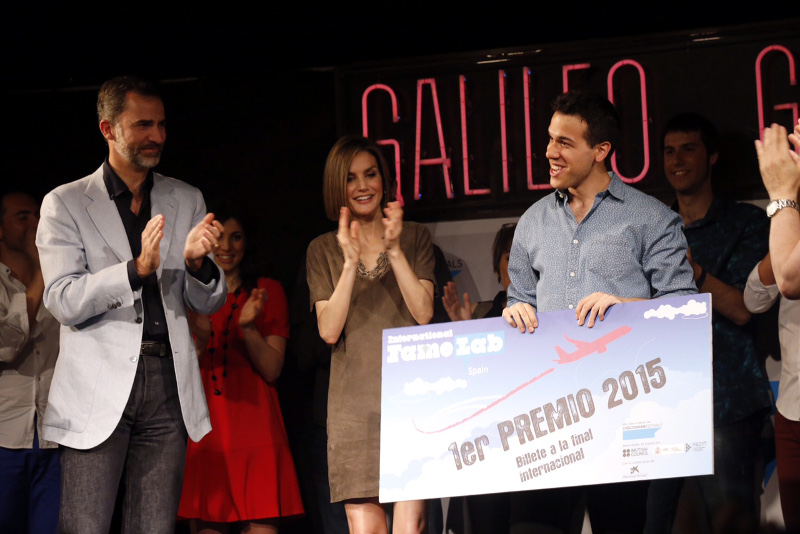 Letizia and Felipe attended the Spanish finals of the FameLab International competition – which is a competition of scientific monologues and aims to promote the dissemination of science through an innovative format. Letizia wore a Uterque brown suede tunic dress with crochet detailing on the neckline. It’s super short on her. I don’t like it. I don’t like her Adolfo Dominguez “Python Heeled Sandals” (€219) either. 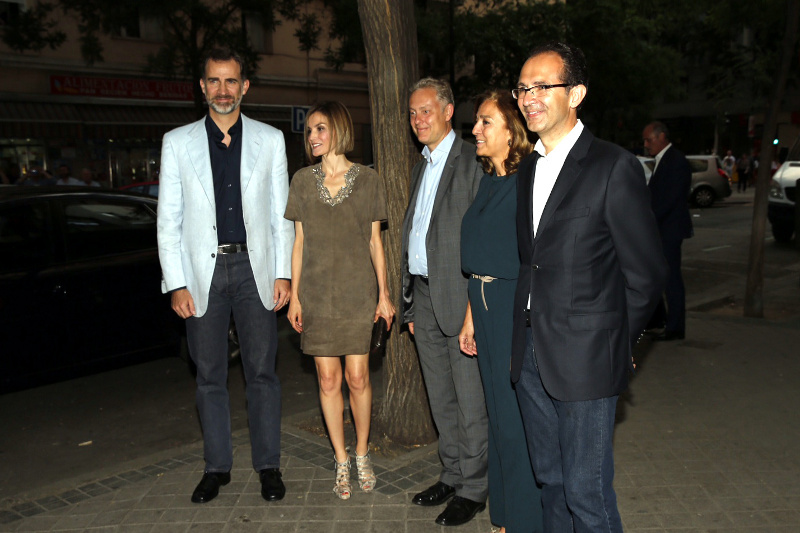 Letizia and Feilipe, along with their daughter Princess Sofia, attended Princess Leonor‘s First Communion – which took place at her school. King Juan Carlos and Queen Sofia were there also.

Letizia wore a Felipe Varela white lace coat over a mint green sleeveless sheath dress. She wore her TOUS moonstone earrings. I think the dress, coat, and earrings are very pretty. Not so pretty? The transparent vinyl disgustingness from Magrit: “Silvie” open back peep-toe sandal (€270) and “Syl” clutch (€150). The bag isn’t super terrible – it’s kind of fun and futuristic – but feet are nasty and I don’t want to see them in transparent (stripper) heels. 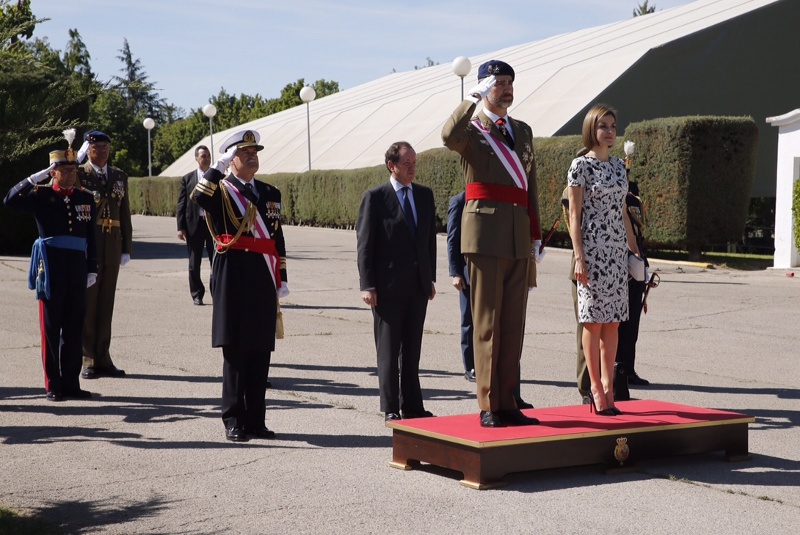 Felipe and Letizia attended the swearing of allegiance of the new Royal Guards at El Pardo. There were both military personnel and civilian personnel who swore allegiance to the flag. Civilians can request and publicly declare their commitment to the defense of Spain under the Military Career Act. Oddly enough, May 22 is also Felipe and Letizia’s wedding anniversary – they have been married for 11 years. 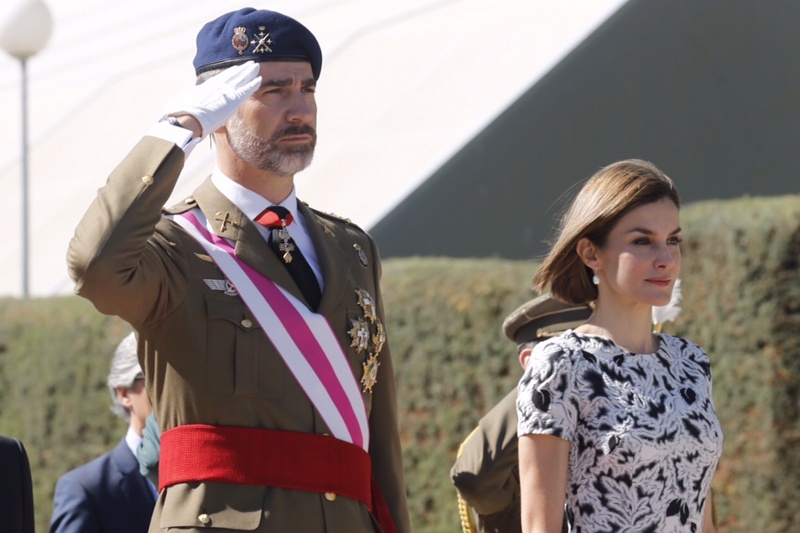 38 thoughts on “Royal Round Up: Queen Letizia”