The Swedish court released a Christmas photo and video of Crown Princess Victoria, Prince Daniel, and their children, Princess Estelle and Prince Oscar. 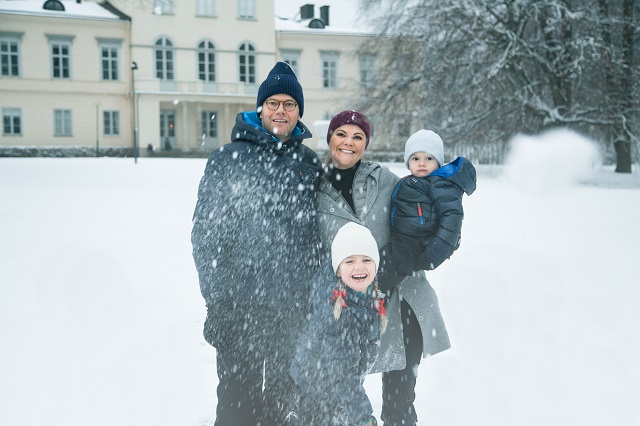 The photo was taken at Haga Palace, the family’s residence, outside in the snow. The video that was released features the family outside of the children’s playhouse, then sledding down a hill and having a snowball fight. The video ends with the family back inside by a fire, playing with games and eating cookies.

Oscar has the biggest smile while sledding, which is adorable. I think this is the first time I’ve ever seen him actually smile.

On Thursday, December 14, Victoria brought both Estelle and Oscar to receive the firs at the Royal Palace from students at the Swedish University of Agricultural Sciences (Sveriges lantbruksuniversitet – SLU).

Every year since the late 1960s, students from SLU have brought a set of King Spruces to the Royal Palace. The King Spruce got its name from this tradition. This is the first year that Oscar has attended. Estelle is an old pro at this event, having done it four times now since 2013.

127 thoughts on “Christmas photo from the Crown Princess Family”