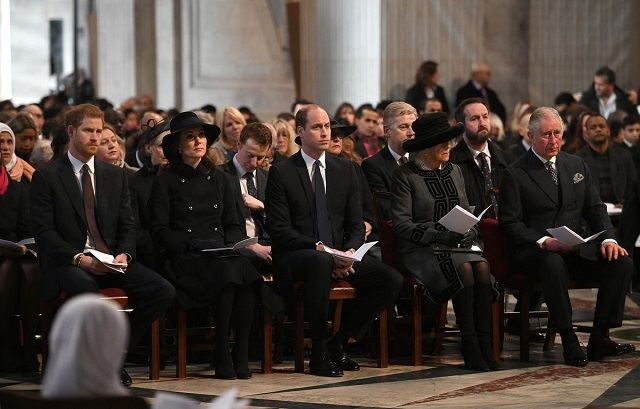 The commemoration, which marked six months since the tragedy, honored those who died and gave thanks to all those who assisted at the time of the fire and since – including the emergency services, recovery teams, the community, public support workers, and volunteers.

The fire, on June 14, claimed 71 lives (53 adults and 18 children). Below is a video listing the names of all the people whose lives were lost that day.

During the memorial, a Green For Grenfell banner adorned with a heart was carried into the cathedral, and families held photographs of victims of the fire while voice recordings from people at the scene of the fire were played to the congregation.

More about the service from the BBC:

“Opening the service ahead of a minute’s silence, Dean of St Paul’s Dr David Ison said: ‘We come together as different faiths as we remember those whose lives were lost. Be united in the face of suffering and sorrow.’ He said the UK grieved ‘at the unspeakable tragedy, loss and hurt of that June day’. […]

“Graham Tomlin, Bishop of Kensington and organiser of the memorial, told the congregation: ‘Today we ask why warnings were not heeded, why a community was left feeling neglected, uncared for, not listened to.’ But he said he looked ahead to the New Year with ‘hope’ of change from ‘a city that didn’t listen’. He said he hoped the word ‘Grenfell’ would change from a symbol of ‘sorrow, grief or injustice’ to ‘a symbol of the time we learnt a new and better way – to listen and to love’.”

The Duke and Duchess of Cambridge, and Prince Harry join survivors of the #Grenfell fire memorial service https://t.co/9mm0ahLDgn pic.twitter.com/DHhX8FbSys

After the service, the royals spoke with bereaved families.

On December 13, William and Kate were photographed leaving Beach Blanket Babylon in Notting Hill. Kensington Palace rented out the venue’s upstairs ballroom for their annual Christmas party and paid an estimated £110 per person for 60 guests. Harry and Meghan were also in attendance, but left earlier and were not photographed.

According to the DM, Kate wore a new Alexander McQueen “Pussy-bow printed silk crepe de chine mini dress” ($2,545). The dress is “patterned with petals inspired by the gardens of Great Dixter house in Sussex, England” and is “cut for a loose fit and has a slightly ruffled dropped waist”.