For twelve years in a row now, Camilla, The Duchess of Cornwall, has hosted children from Helen & Douglas House, of which she is Patron, at Clarence House for a Christmas party where they decorate the tree and have lunch. This year’s lunch took place yesterday, December 13. 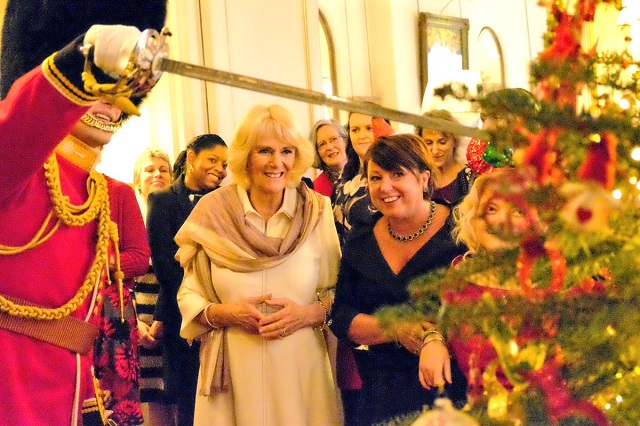 In addition to the Helen & Douglas House kids, children from Roald Dahl’s Marvellous Children’s Charity were present. Clarence House also announced that Camilla has become the new Royal Patron of that charity.

Helen & Douglas House enables young people (0-35 years) with life-shortening conditions to live as well and as fully as possible to the end of their lives by providing palliative care at a specialist level for young people, through medical and nursing expertise, emotional and practical support.

The children spent time decorating the Christmas tree – with the help of assistant equerry, Welsh Guardsman Jack Farmelo, who used his sword to put ornaments on the tree – before Camilla helped serve lunch and handed out gift bags.

In an off-the-cuff speech, Camilla said:

“May I wish you a very Happy Christmas. I always feel like today is the start of Christmas. It is such a joy to meet all of you. I hope the children have enjoyed themselves as much as I have.”

More from the Daily Mail:

“Along with the children she met was adorable Anthony Brine, five, who suffers from a painful genetic condition which causes his body to develop blisters both inside and out, from any kind of friction, called recessive dystrophic epidermolysis bullosa. He is under the care of Helen House Hospice. Camilla admired his festive jumper and Santa socks, and asked him what he wanted from Father Christmas.

“‘A surprise,’ he said merrily (although his mother later admitted that there were five other things on his list). ‘Oh, how sweet,’ the duchess cooed.

“Anthony’s mother, Daniela Brine, 29, said his condition was discovered at birth when the midwives rubbed his little hands and feet and his skin came away. She explained that she and her husband, Richard, have an older daughter who does not have the condition, but that with a one in four chance of another child inheriting it, they had reluctantly decided not to have another child and focus their attention on Anthony who needs daily care. Barely 5,000 children in the UK suffer from the condition in various forms but Anthony’s is so severe that it is the equivalent of experiencing third degree burns on a daily basis. Despite this he still attends a mainstream school.

“‘He is such a brave little boy,’ she said, ‘and copes with his condition so bravely. He knows what he can and can’t do. It is just so amazing to be here. What a wonderful thing to invite us to. It really feels like a friend has asked us into their home. ‘

“The Duchess also admired the red bow tie sported by Perfect Akerejola, seven, from Bexhill who has sickle cell disease and is helped by the Ronald Dahl charity. ‘You look so smart, did you chose it yourself?’ asked Camilla to a proud-looking Perfect. As the duchess left he said knowledgeably: ‘She is the deputy Queen.'”