I’m still catching up on stuff from last week before the Cambridge tour starts later today. So here is a post about Crown Princess Victoria‘s 40th birthday celebrations in Sweden.

Victoria’s celebrations began on her actual birthday July 14, Victoriadagen, with a Te Deum in Stockholm at the Royal Chapel in the Royal Palace. The entire immediate royal family attended the Te Deum, along with representatives of parliament and the government.

Afterward, a reception was held at Logården (the garden of the Royal Palace) for the guests of the Te Deum where Victoria spoke to the crowd. After the reception, there was a carriage procession through Stockholm.

Prince Daniel took the below photo of the Crown Princess Family in the carriage. 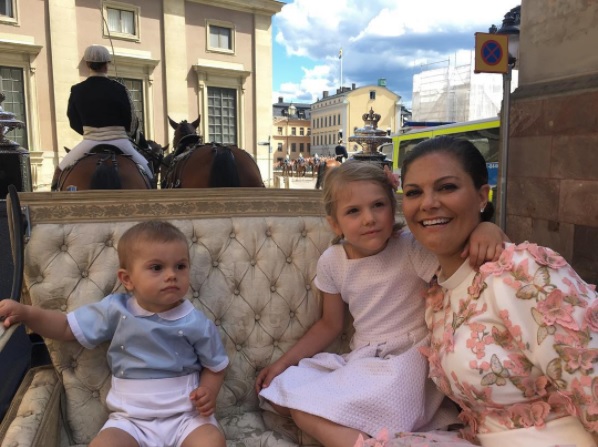 Victoria wore a Pär Engsheden dress with pink butterflies on a white background. Princess Estelle wore a white dress with some pink butterflies in her hair to match her mom’s dress. Prince Oscar wore the same blue and white outfit that Prince Nicolas wore to Oscar’s Christening.

Princess Madeleine wore Erdem (sigh) and a Philip Treacy hat. Princess Leonore wore a pink dress while Prince Nicolas wore another blue outfit (has he ever worn any other color?). Chris O’Neill was also there.

King Carl Gustaf and Queen Silvia were also there.

After the events in Stockholm, the family headed to Öland for the normal Victoria Day celebrations, starting with the annual evening concert.

Silvia and Victoria always were the traditional dress of Öland for this event.

Madeleine wore a dress from Zimmermann with Valentino wedges.

Victoria’s birthday celebrations continued on July 15 with the traditional greeting the public outside Solliden Palace.

Victoria color-coordinated her entire family (including her parents) in blue, and I’m now wondering if she will be criticized for it the way Kate is when she color-coordinates her family.

Below is a video with highlights from the celebrations.

Here are some more fun photos from the celebrations.