Prince William and Kate Middleton kicked off their 5-day tour of Poland and Germany in Poland yesterday, July 17, with Prince George and Princess Charlotte. 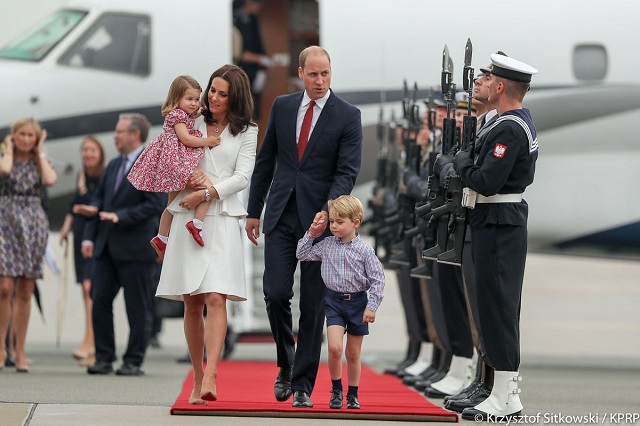 The Cambridge family landed in Warsaw in early afternoon and were greeted by officials as they stepped off their plane.

William and Kate dropped off their kids and headed over to the Presidential Palace for an official greeting from the President and First Lady of Poland. There, the royal couple toured the Palace, had lunch, and did a gift exchange.

Outside of the Palace, William and Kate did a walkabout with the gathered crowd after meeting some schoolchildren.

One person in the crowd told Kate that she was beautiful, which Kate said was not true and that it’s just the makeup. Note: I am including this quote because it’s a thing she supposedly said, let’s please not insult Kate or her looks over this comment.

“Magda Mordaka, 21, a student, said: ‘We are fans of the British monarchy. We have a Facebook group. We love her style, and her contact with people. We were waiting for this visit from the very beginning. What would she wear? Would she bring the children? We were telling her that she is beautiful and perfect, but she said it’s not true – it’s just the make-up.'”

In this video, Kate and the First Lady are walking ahead of William and the President. I don’t know why the change, but it’s a refreshing change (since usually Kate/First Ladies walk behind William/Presidents).

The next stop of the day was the Warsaw Rising Museum where they toured the museum and meet with veterans before lighting candles in memory of those involved in the Rising. William and Kate were joined at this event by the President and First Lady. The Warsaw Uprising was a 63-day rebellion in 1944 against Nazi Germany, which resulted in a German victory and the destruction of the city.

William and Kate met four Polish Second World War veterans, two of whom fought in the Uprising, and another two who escaped from Poland to join Allied forces and take part in military campaigns. One veteran they met was 98-year-old Colonel Edmund Brzozowski who joined the Polish resistance and was captured by Stalin’s forces early in the war and imprisoned in Russia. When the Soviet Union changed sides, he was allowed to join up with British forces in the Middle East and ended up fighting with the Polish 2nd Corps at Monte Cassino. Colonel Brzozowski was not impressed by meeting Kate. When asked if it had been a good experience to meet Kate, he pulled a face and replied: “Not especially.”

The next part of the day led William and Kate to the Heart in the Warsaw Spire building. The Heart is a collaboration center that aims at fostering business relations between corporations and ready-to-scale startups in Europe and Israel. There, William and Kate joined Polish entrepreneurs for a tech market-place and pitching session. This event marks the beginning of the “Warsaw-London Bridge” initiative which aims to help small Polish businesses access London’ unique opportunities for scaling to become global players.

Among the start-ups that William and Kate interacted with was one that specializes in virtual reality and 3D visualizations. The royal couple got to put on the headsets and experience VR. Side note: I’ve played games with the Vive VR headset and VR is pretty awesome.

Another company the Cambs interacted with was Whisbear, which designs soft toys to comfort newborns by replicating the sound of the womb, responding to their cries to soothe them. After receiving one of the toys as a gift, Kate joked that she will need to have more babies to give the toy to.

“The Duchess, already a mother-of-two, was offered a cuddly toy designed to soothe tiny babies when she and Prince William went to an event for start-up tech companies. Saying thank you for the present, she turned to the Duke laughing and said: ‘We will just have to have more babies.’ …

“Julia Sielicka-Jastrzebska, who founded the company with her sister, said the Duchess made the lighthearted comment after learning that the bears, which she had admired, were designed for children younger than Prince George and Princess Charlotte. ‘We gave the Duchess some presents for Prince George and Princess Charlotte,’ she said. ‘She said they should have more babies, and they laughed.’

“Among the presents were a bear for each child, and a T-shirt for the Duchess with the slogan ‘i’mperfect’; part of the company’s campaign to encourage mothers not to feel the pressure to be flawless.”

For this portion of the day, Kate chose a red and white color scheme (the colors of the Poland flag), opting for a new custom version of the white Alexander McQueen Wool and silk-blend twill peplum coat (£798) paired with her red Jenny Packham Casa clutch (which she debuted in Canada), her Cartier watch, Gianvito Rossi Praline pumps, and new earrings, necklace, and ring all in red stones (but the styles don’t match so the set looks cobbled together and wasn’t originally meant to go together).

I like the earrings and necklace, even though they aren’t part of the same set.

At the end of the day, William and Kate attended a Queen’s Birthday Party hosted by the British Ambassador at the Orangery in Łazienki Park. William gave a speech.

Guests from the worlds of business, art, fashion, and NGOs enjoyed music by a Polish orchestra led by Rafal Zambrzycki-Payne, an award winning Polish-British musician.

Kate drank some white wine at the reception.

For the reception, Kate chose a Polish designer, Gosia Baczynska, but the dress she chose had some unfortunate darting issues. The black and white sleeveless cocktail dress features a deep v neckline, leaf detail at the waist, and a cutout* design on the skirt.

* I know it’s not a proper cutout skirt, but the design looks to me like someone cut up paper and stuck it on the skirt, so I’m going with “cutout” to describe it.

I think this dress is pretty and interesting, and quite a departure for Kate, but the boob darting is unfortunate.

Kate paired the new dress with repeated accessories: her Gianvito Rossi Ankle Strap Suede d’Orsay Pumps, her Balenciaga pearl earrings, and her four pearl necklace, all worn previously together in Paris in March. She also carried her black Prada clutch.

169 thoughts on “William & Kate land in Poland with George & Charlotte”