William & Kate are ‘intensely moved’ by visit to Stutthof 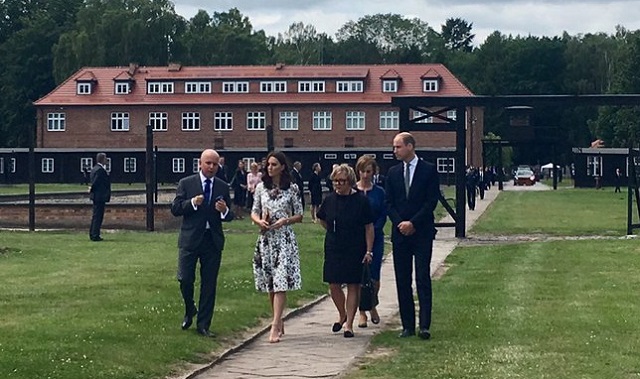 William and Kate began their day at Stutthof where they walked through the camp and viewed a series of exhibits that illustrate the conditions in which prisoners had to live while being used as slave labor. They were shown discarded shoes, clothes, and other personal possessions taken from prisoners when they arrived at the camp, and were also shown the gas chamber used to murder those too sick to work.

In September 1939, Stutthof Concentration Camp became the first concentration camp outside Germany, and by May 1945 – when the camp was liberated by Soviet forces – over 85,000 people had died out of the more than 110,000 people who had been held there.

William and Kate sat down to speak to a group of survivors of the camp, two of which were Zigi Shipper and Manfred Goldberg, 87, who were sent to the Stutthof when they were 14. Sky News has an article about them, which includes quotes about the decision to take part in this visit and the conditions of the camp:

“Speaking about his decision to go back, Mr Goldberg said: ‘For me it is quite a seismic event because, since I was permitted to come to England in September 1946, I have not set foot in either Germany or Poland. I decided that I really had to face the past and hence my consent to come.’

“Zigi recalled the horror of the camp in the winter and group huddles to try to keep everyone alive. He said: ‘We were just trying to keep warm, huddled together. Then after a while the inside people would go out so the outside people could get warm.’ He said about the royal visit: ‘When a royal goes and it’s put on the television or in the paper, people say ‘Why don’t we go? And that’s what we want. People should know that it wasn’t just Auschwitch-Birkenau, it wasn’t just Bergen-Belsen, look at all the other camps.’ He said he thought William and Kate were ‘very moved’. He said: ‘You could see their faces. They were in pain.’ […]

“They then met three Polish survivors Maria Kowalska, 91, Mareka Dunin, 92, and Edward Anderson, 91. After hearing details of their harrowing experiences at the hands of the Nazis, speaking through a translator, William asked: ‘You must wonder how people could commit such evil against another human?’ Edward said: ‘After we witnessed these things and lived through them, all we have left as a weapon is the knowledge to warn other people. To stop it happening again.’ William asked Edward if he thought people had ‘learnt lessons’ from the Holocaust. He answered: ‘I think we have learnt some lessons but we have not learnt enough.’

“Before leaving the survivors, Kate said: ‘What you have been through and you still hold in your memories must be extremely difficult to speak about. Thank you very much for meeting us.'”

At the Star of David, William and Kate paid their respects to the memory of 28,000 Jews who died at Stutthof and the 6 million killed in the Holocaust, and were led in a short prayer by Mr. Shipper and Mr. Goldberg.

The royal couple left Stutthof through the main entrance to the camp, what was known as the ‘Death Gate’.

William and Kate left a message at Stutthof in the guest book, which said:

“We were intensely moved by our visit to Stutthof, which has been the scene of so much terrible pain, suffering and death. This shattering visit has reminded us of the horrendous murder of six million Jews, drawn from across the whole of Europe, who died in the abominable Holocaust. It is, too, a terrible reminder of the cost of war. And the fact that Poland alone lost millions of its people, who were the victims of a most brutal occupation. All of us have an overwhelming responsibility to make sure that we learn the lessons and that the horror of what happened is never forgotten and never repeated.”

William and Kate then visited Gdansk, where they joined a street party in the central market square. They were greeted by large crowds and viewed vendors – including a demonstration of amber processing, and a tasting of Goldwasser (a traditional liqueur with flakes of gold) and pierogi – before doing a walkabout.

“At a stall in the square, the royal couple downed Gdansk liqueur, Goldwasser (Golden Water), a strong root and herbal liqueur which has been produced since at least 1598. William said after he downed the shot in one: ‘It is very good, very sweet.’

“‘And very strong … ” Kate added as she recovered from downing the 40 per cent proof liqueur. […]

“They chatted to Zbligniew Strzelczyk, an expert on amber and owner of the Styl Gallery in Gdansk, a city famed for the stone since Medieval times. The craftsman said: ‘They were very interested in the trade. Prince William asked about where the amber is found and I told him 10 per cent is washed up on beach. I gave them two chunks of amber, one with an ant and two leaves inside and another with a little fly and air bubbles. They seemed delighted.'”

The next stop was the Gdansk Shakespeare theatre where they watched a performance before attending a small reception.

The royals then visited the European Solidarity Centre where they toured the museum and met with founding member of Solidarity. They then placed cards on a solidarity wall that is covered in personal messages from the public.

William and Kate met former Solidarity co-founder and ex-Polish president Lech Walesa. Along with his colleagues, Walesa helped bring about the fall of communism in Poland by leading workers at the shipyard out on strikes against the authorities, eventually turning Solidarity into a non-violent anti-communist movement with 10 million members that ultimately forced free elections in Poland.

The last event of the day saw William and Kate walk through the Gdansk shipyard gates before laying roses at the Monument to Fallen Shipyard Workers, who died during the suppression of a workers’ strike in 1970.

Kate wore Erdem (sigh). Kate chose the Imari Skirt Hurst Rose ($890) and a top in the matching pattern. Kate carried a flap clutch from Polish brand Etui Bags, and wore her Cartier watch and Stuart Weitzman NearlyNude Ankle Strap Sandals ($398) which Kate first wore to Wimbledon on Sunday. Kate’s earrings and necklace are new, and are potentially amber, which is a native gemstone of Poland and one of Gdansk’s chief exports.

I saw in the comment section on the previous article there were some people who were very unhappy about Kate’s fashion choices for Day 2. Personally, I think the only thing wrong with this outfit is that it’s Erdem, but other than that I think it was fine for Stutthof – the top and skirt are in muted colors, and I don’t think florals are offensive (one of the officials guiding them around the camp wore a brighter pink top). I was surprised by the open-toed shoes, though. That was odd. Even more odd, though, was the choice not to change before the events in Gdansk. I thought for sure Kate would have, but she didn’t. I thought that was an odd choice.