Charlotte the diplomat as Cambridges arrive in Germany

On July 19, Day 3 of the Poland and Germany Tour, Prince William, Kate Middleton, Prince George, and Princess Charlotte departed Poland and traveled to Germany for the remaining days of the visit. 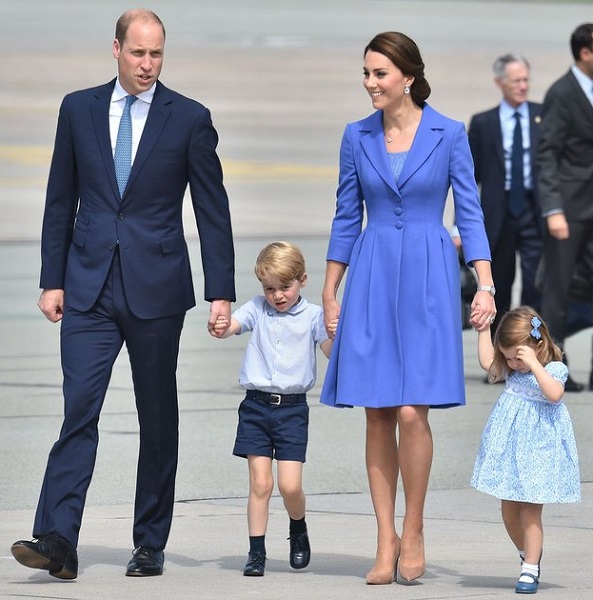 While George is totally over the whole tour thing, Charlotte is turning into a little diplomat, shaking hands with officials, accepting flowers, and even giving a little curtsy.

Below is a video of Charlotte accepting flowers and shaking hands.

And below is a video of Charlotte giving a curtsy.

The first stop in Germany was a meeting with Chancellor Angela Merkel at the German Chancellery. The trio posed for photos on a red carpet before going inside for a private lunch. Palace aids said it was an “extended discussion” and “lunch.” Upon welcoming Kate to Germany, Merkel asked Kate if she spoke any German, to which Kate replied: “No, no. Sorry.”

William and Kate next visited Brandenburg Gate – a late 18th-century neoclassical monument commissioned by Frederick William II of Prussia to represent peace – where they posed for photos in front of the gate before doing a walkabout with the gathered crowds on Pariser Platz.

Next, the royal couple visited Berlin’s Holocaust memorial where they toured the underground museum which tells the story of the extermination of six million Jews, spoke to survivor Leon Henry Schwarzbaum about his experiences, and walked through the memorial itself.

From the Evening Standard:

“Leon Schwarzbaum, 96, told them about life in the concentration camp, where his parents were killed, and showed them pictures of his lost family. ‘That’s me at four years old with my family and my mother and father, all dead. Killed at Auschwitz,’ he said. Mr Schwarzbaum, who was born in Hamburg but emigrated to Poland before the war, spent two years at Auschwitz from the age of 21, working as a runner for the camp commander, his pace and strength perhaps saving his life.

“William and Kate asked him numerous questions about his time there. He showed them pictures of the bunks crammed into each hut. Kate asked him: ‘How many people slept in each bunk?’ ‘Six, six, and six, he replied, pointing to a row of three bunks.

“He told the couple about the smell of burning bodies pervading the camp from the crematorium. ‘This was the chimney,’ he said, showing them a picture. ‘You could smell the chimney throughout the whole camp. It was a terrible smell.’

“The frail survivor, who was liberated by American troops while on a death march near Berlin, lived in the US after the war but returned to settle in Berlin. He said it had taken him a long time to begin to talk about his dreadful experiences but he had started giving talks about 10 years ago in an effort to educate young people. ‘I didn’t speak for a long time after the war, he said. ‘Ten years ago. Very late.’

“‘That’s a very brave thing to do,’ Kate told him.’Did it feel good to talk about your experience?’ the duchess asked him. ‘I see that young people want to know what was done at that time,’ he said.

“William asked him about his thoughts on the Nazis now after all these years. He replied: ‘They destroyed my life. I wanted to study but I couldn’t study because the universities had been closed and the schools had closed. They took my jewellery and everything, my family.'”

William and Kate then walked through the Memorial to the Murdered Jews of Europe, which contains 2711 concrete blocks representing a graveyard.

William and Kate then visited Strassenkinder – a charity which supports young people from disadvantaged backgrounds, including homeless children. They met people who were helped by the charity before meeting representatives from the Robert Enke Foundation and giving children lots of hugs.

William and Kate then traveled to Bellevue Palace where they met the President and First Lady of Germany.

The day ended with a Queen’s Birthday Party held in the gardens of the British Ambassador’s residence. William gave a speech which you can read here.

Below is a video of William’s speech.

I think Kate looked very pretty for this part of the day, I don’t even mind the nude shoes here.

The last part of the day, though, was a no from me because dust ruffle.

Kate debuted another new pair of shoes, in nude, this time from Prada, but in sandal form – the Prada Quazo Sandals.

Charlotte with the little posy she got.

But for the most part he seemed like maybe he just woke up from a nap and wasn’t feeling it at all.

Kate during the walkabout at Brandenburg Gate.

Kate drinking at the reception.

I know Day 4 is already mostly over, but that post will come much later, I barely had time for this one.

261 thoughts on “Charlotte the diplomat as Cambridges arrive in Germany”