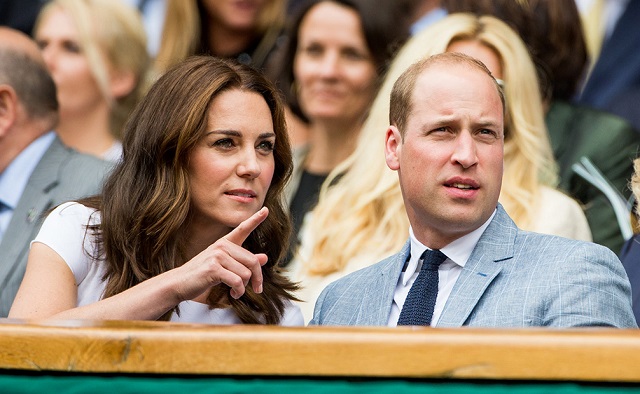 There is not a ton of information or interesting photos, so this post is going to be pretty light. William and Kate, as Patron of Wimbledon, watched the Men’s Final match between Federer and Marin Čilić, which Federer won. After the game, the royal couple congratulated Federer on his win.

Below is a brief video of William and Kate giving Federer kisses and handshakes. Kate says in the video: “Congratulations. Very, very well played. [inaudible].”

Hugs, kisses and handshakes from royalty and the family for the #Wimbledon champion… pic.twitter.com/wxpTxn8w6i

Kate wore a Catherine Walker dress in white with a floral pattern on the full skirt. Kate also wore her Cassandra Goad Temple of Heaven earrings, and a nude sandal with a block heel. Kate wore her Cartier watch and carried her Victoria Beckham Quincy bag. Kate also sported a purple and green bow pin which is worn by female members of the All England Club (male members get a tie).

The Cambridges’ tour starts tomorrow which will be exhausting. I will hopefully have my post about Victoria’s 40th up soon.