Following the big tiara-filled gala dinner on May 9, the royals came out for Day 2 of the 80th Birthday celebrations of King Harald and Queen Sonja, which was a government-hosted black tie dinner at the Opera House in Oslo. It was rainy and wet so the royals had to cover up with umbrellas and outerwear.

King Harald and Queen Sonja arrived under coats and wraps, which means we didn’t get a good look at Sonja’s custom dress as she walked in. 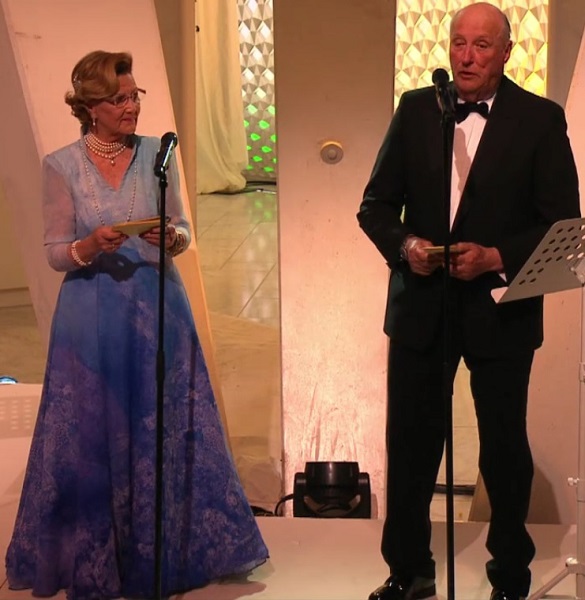 However, Sonja took her wrap off once inside and we did get a look at the dress when she and Harald were giving a speech. Sonja designed the dress based on her graphic prints, and the Opera House staff made it. Harald referenced this during the speech, and Sonja gave a twirl – you can see the clip here.

Princess Martha Louise and Sophie, The Countess of Wessex walked in together.

Martha Louise wore a repeated Ingunn Birkeland gown, which isn’t my taste, but I am loving the shoes.

Sophie wore a custom Suzannah gown which looks great on her – but I still like the green from the gala dinner better.

Princess Astrid had no fear in hiking her dress up to get it out of the rain.

King Willem-Alexander and Queen Maxima, who repeated her Prinsjesdag 2016 gown from Claes Iversen but replaced the plain blue top with a matching embellished top. I much prefer this version of this outfit than the 2016 version. Also the sapphire jewelry is gorgeous.

Princess Beatrix and Princess Mabel looked like they were having a great time on the carpet.

But King Carl Gustaf did not look like he was having a good time as he held an umbrella over Queen Silvia.

Crown Princess Victoria, in a repeated floral dress from Acne which I don’t like, and Prince Daniel.

Lace, ruffles, and flared sleeves – oh my! Princess Sofia tripled-down on fashion elements I hate with this white Alexis Liliane Long Dress. Prince Carl Philip was is nice accessory, though.

King Philippe and Queen Mathilde were quite adorable posing on the carpet.

Sisters Queen Margrethe and Queen Anne-Marie walked in together.

Crown Prince Frederik was another dude in a navy suit. And Crown Princess Mary wore a new Erdem “Agnes Belted Floral Print Silk Gown” ($1,795). This is not the worst Erdem I’ve seen – that honor goes to Kate’s 2015 Erdem and Meghan’s 2017 Erdem – but it’s still floral and I just don’t like floral.

Prince Joachim and Princess Marie joined the birthday festivities for day 2 (they were not there on day 1). Marie’s Rikke Gudnitz repeat reminds me of Kate’s Lela Rose dress from Cornwall last year because of the color and sleeves.

Prince Nikolaos and Princess Tatiana in an ice skater dress.

The Spanish royal family were not represented at all on day 1 at the gala dinner, but King Juan Carlos and Queen Sofia came out for the day 2 celebrations.

Hereditary Grand Duchess Stephanie is my best dressed for day 2, not only because I love the color of her Paule Ka gown but because she had the best jewels – opting for the Luxembourg Aquamarine Parure.