Kate hangs with Stephanie in Luxembourg

Fashion Jewelry Kate Middleton Luxembourg Royal Family
May 12, 2017May 11, 2017 by katemiddletonreview207 Comments on Kate hangs with Stephanie in Luxembourg

Kate Middleton made her second solo overseas visit yesterday, May 11, when she visited Luxembourg at the request of HM’s Government.

Kate began her trip with a stop at the Grand Duke Jean Museum of Modern Art (Mudam) where she was accompanied by Hereditary Grand Duchess Stephanie. The two ladies toured exhibitions by British artists Sir Tony Cragg and Darren Almond.

Kate and Stephanie then attended a reception at the museum where they met leading young people in the fields of culture, education, business, and the charitable sector.

Kate gave away more tidbits about George and Charlotte:

“[Kate] was handed a posy by three-year-old Teo Schleck, the son of cyclist and former Tour de France winner Andy Schleck. Upon seeing the Duchess, who was wearing a pale blue Emilia Wickstead coat, Teo appeared a little overwhelmed, and, as the Duchess crouched down to speak to him, dived into this mother’s arm for comfort. His mum Jil later said: ‘She asked if he was shy and said not to worry, it’s totally normal at that age.’ […]

“Frank Schleck, also a professional cyclist and brother of Andy, said: ‘She asked me about the Tour de France and whether I liked it. I said it was a love-hate relationship. I have two daughters and she was asking if they would be cyclists too. We talked about how they [children] really appreciate riding a bike. For kids, it’s great because they can exercise and – as long as it’s safe – go to school without their parents. She said their kids have bikes and that they’re always excited about trying to ride.'” 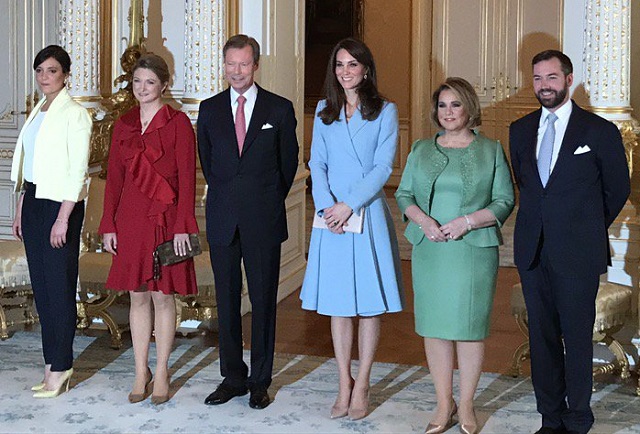 Kate then moved to the Luxembourg City Museum for the official commemoration of the 1867 Treaty of London – which was an international treaty signed on 11 May 1867, in the aftermath of the Austro-Prussian War and the Luxembourg Crisis, that guaranteed Luxembourg’s neutrality and interdependence. Delegates from the counties that signed the Treaty – Germany, Austria, Belgium, France, Great Britain, Hungary, Italy, the Netherlands, and Russia – gathered for the event. 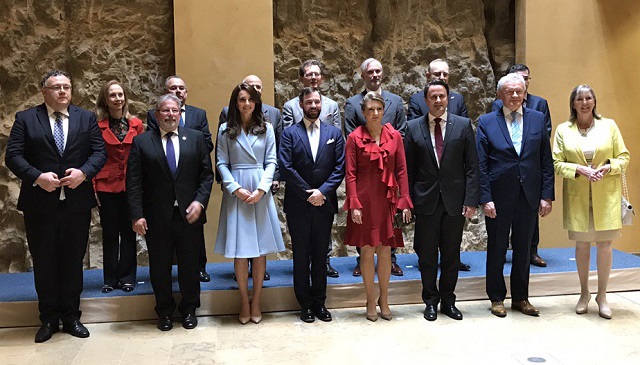 The delegates were given a guided tour of the Museum’s new exhibition: ‘The Luxembourg Story’, which tells the history of the city of Luxembourg, from its origins in the 10th century to the present day.

The delegates then took in the views from the Corniche of Luxembourg’s old town, a UNESCO Word Heritage City, before moving to Dräi Eechelen Museum to tour the 1867 Commemoration Exhibition. The new exhibition reveals how the dismantling of Luxembourg’s fortifications laid the foundation for the transformation of Luxembourg into an open and outward-looking city and country. Kate and the delegates viewed original copies of the Treaty. 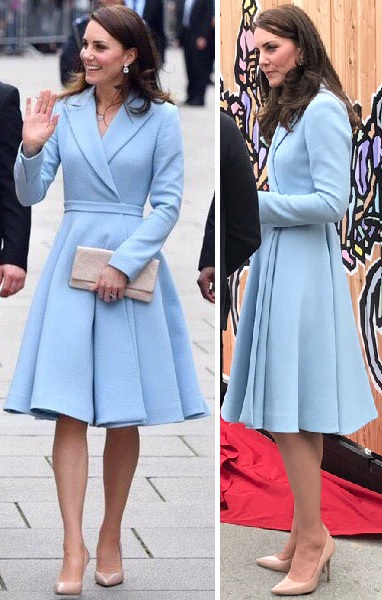 Kate wore a new coatdress by Emilia Wickstead in that pale blue color she favors. The coatdress is very similar to the green Wickstead coatdress she wore to two St. Patrick’s Days in a row. With this latest addition, Kate now has 16 pieces in this same color.

Kate’s trusty Mappin and Webb Empress necklace and Cartier watch made a reappearance, as did the boring LK Bennett Ferns and Etui Bags nude clutch.

Aside from the color, which just isn’t a favorite of mine, I actually really like the coat itself. I love Kate’s green Emilia Wickstead coat which looks very similar to this one – it’s Number 8 on my Top 25 Favorites list. I actually think this is my favorite of Kate’s powder blue coats. But I hate the boring nude accessories and I’m not a fan of the jewelry either. Pretty coat; needs better accessories.

Here are some more photos:

207 thoughts on “Kate hangs with Stephanie in Luxembourg”