After months of hearing about Prince William, Kate Middleton, and Prince Harry‘s Party at the Palace, it came and went with seemingly little fanfare. Or at least that’s how I feel since none of the regular royal photographers were there and very few reporters were. 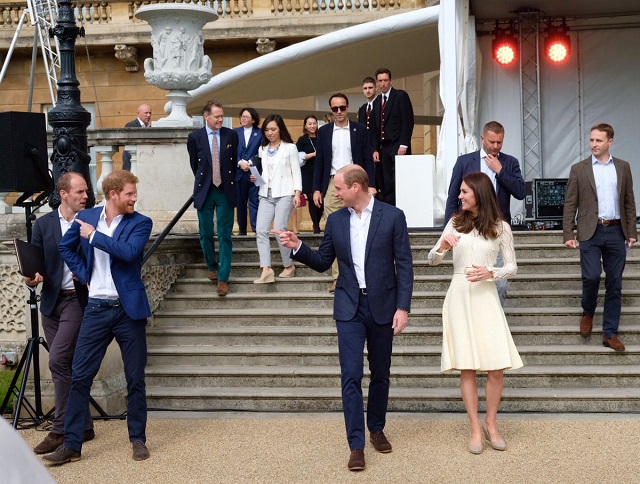 Yesterday, May 13, the Duke and Duchess of Cambridge and Prince Harry hosted the Party at the Palace in the Buckingham Palace gardens for around 850 children whose family members have died serving in the Armed Forces.

“Buckingham Palace welcomed a very special group of children on Saturday — hosted by Prince William, Princess Kate and Prince Harry… The royal trio chatted with children at different activity stations at the party. Kate chatted with a group of girls while Harry played around with several kids. Kate also took part in launching a giant slingshot from the palace’s steps and giggled along with William and Harry during the festivities. The celebration honored the children of service members who have died while in the armed forces…

“Prince Harry made an emotional speech to the party, telling the guests, ‘Today was organized to celebrate you guys. We’re here to remind you that we as a family, and as a nation will never, ever forget the sacrifices that all of you here have made. We wanted to give you an opportunity to know that you are part of, sadly, a very large group of fantastic people. The three of us, and all of our family, wanted to thank you so, so much for everything you’ve done. I can assure you that Buckingham Palace gardens have not seen this much fun, ever.’

“William and Harry, who are marking the 20th anniversary of the death of their mother Princess Diana this year, ensured there were organizations that support families and children dealing with loss were also in attendance. Child Bereavement UK, of which William is patron, Scotty’s Little Soldiers, Winston’s Wish and the armed forces charity SSAFA were there alongside Full Effect and Coach Core, which hosted workshops in beatboxing, breakdancing and other sports on the lawns…

“At the party, Harry met with Jack Rigby, 6, the son of Fusilier Lee Rigby who was murdered in 2013 by Islamic extremists outside the Royal Artillery Barracks in Woolwich, south London. Jack’s mother, Rebecca Rigby, 34, told reporters, ‘It means so much that the royals put this event on and are showing us their support. It’s so important for Jack and all the other children here to know they are not forgotten – that they’ve not gone through all of this to be forgotten, that they’ve got their support. It’s also so important for Jack to be able to speak to other children and know that other children have gone through the same thing as he has.’

“The playful prince also had a go at plate-spinning with George Hinchcliffe, 3, who had dressed as superhero Spider-man for the party. His father, Captain Richard Hinchfliffe, who served with the Royal Armoured Medical Corps, died in an accident as a civilian in 2015 shortly after leaving the RAMC. His mother, Abigail Hinchcliffe, said it was ‘very emotional’ to be at Buckingham Palace and watch her son playing with Prince Harry.

“Also invited was Jamie Molyneux, 18, and his younger brothers and sister, Arron, Charlie and Bethany. Their father Lt Cdr Ian Molyneux was murdered in 2011 by Ryan Donovan, a junior member of the royal navy while on board the nuclear submarine HMS Astute. Lt Cdr Molyneux received a posthumous George Medal for his actions which prevented others being killed. Mr Molyneux, from Wigan, who was 13 when his father died, said it was ‘comforting’ to know his family had not been forgotten. ‘The Duke of Cambridge wrote to us soon after my dad was killed. It was very touching. He said he understood what we were going through as siblings, with his experience losing his mum,’ he told reporters. ‘I had two choices to make. I was either going to go off the rails and end up in prison or accept what’s happened and do the best I can.’ Mr Molyneux is following in his father’s footsteps, and passed out of Welbeck Defence Sixth Form College, Leicestershire, last year, with the award for best naval cadet.

“Also among the guests was Honey Doherty, 10, whose elder brother Jeff died when she was a baby when he was killed serving in the Parachute Regiment in Afghanistan. ‘I’m really happy but I’m also really grateful because of what a hero my brother is, and I wouldn’t be going there if it wasn’t for him,’ she said. Private Doherty was shot dead in Sangin in 2008, aged 20.”

Performances concluded with a special display by the RAF Falcons, who landed outside The Palace and landed in the garden.

I don’t have much to say about the party other than the kid in the Spider-Man costume, George Hinchcliffe, wins best dressed. Also, I think it’s nice that William wrote to the family of a soldier who was killed.

Kate’s fashion bored me. She repeated the same outfit she wore to the last children’s garden party she attended: her See by Chloé lace knit dress, Acne Studios Leather waist belt, and Monsoon Fleur wedges. Kate switched out her earrings this time, though, opting for the Annoushka Pearl Drops.

185 thoughts on “William, Kate & Harry host Party at the Palace”