This royal round up features: Queen Letizia over in Japan for a State Visit, Prince William and Prince Harry in France for a WWI commemorative event, Princess Beatrice at WE Day in NYC, and Crown Princess Victoria doing her thing.

King Felipe and Queen Letizia paid a State Visit to Japan from April 4-7. They arrived in Japan on April 4 and were greeted by the Deputy Foreign Minister and ambassadors, before meeting with Emperor Akihito and Empress Michiko on April 5.

For the day meeting, Letizia wore a red outfit from Felipe Varela which consisted of a velvet dress with buttons and a bow at the neck and a coat with two ties. Letizia’s ruby and diamond earrings were a loan from Queen Sofia. Letiza’s pumps are from Lodi and her clutch is also Felipe Varela. The outfit is very pretty if you ignore all the buttons and ties. 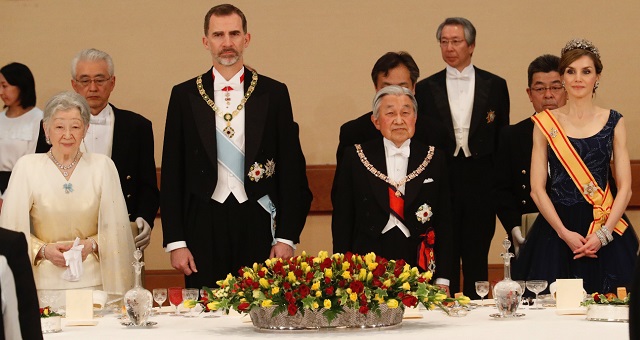 In the evening of April 5, there was a State Banquet at the Imperial Palace.

Letizia repeated a Felipe Varela midnight blue tulle ballgown embroidered with crystals in the shapes of leaves that she previously wore to a State Visit from Peru in July 2015.

She wore her favorite Spanish Floral Tiara, the two large “joyas de pasar” diamond bracelets she wore to the State Visit from Argentina in February, a diamond fleur de lys brooch, and sapphire and diamond earrings borrowed from Queen Sofia. 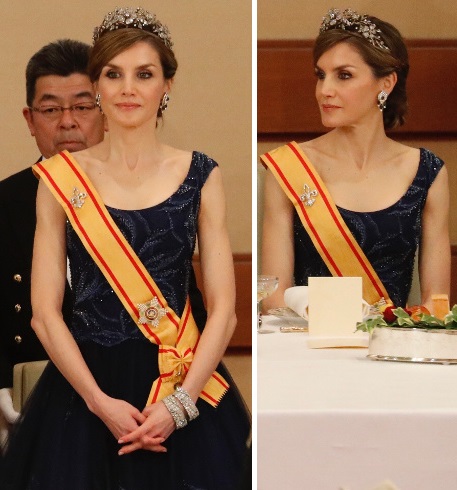 On April 9, Prince Charles, Prince William, and Prince Harry joined French President Francois Hollande and Canadian Prime Minister Justin Trudeau at the 100th anniversary commemorative service at the Canadian National Vimy Memorial in Vimy, France. The Battle Of Vimy Ridge was fought primarily as part of the Battle of Arras during the First World War. The British-led offensive was mostly fought by the Canadian Corps.

Princess Beatrice attended the WE Day New York Welcome to celebrate young people changing the world at Radio City Music Hall on April 6. She clearly spoke on stage, but I haven’t found any information about what she spoke about. On a superficial note, her purple dress is cute.

In a somewhat related note: Iris who runs the Princess Beatrice Blog has created a fundraiser page to assist in her trip to London this July. She writes:

“I’m Iris and I have Cerebral Palsy- Diplegia, I use a wheelchair. I have been unexpectedly blessed. Someone generous is giving me Airport tickets and hotel for a trip to London. I will be going during July 20-25. I always had a fascination with London’s historic places and of course the royal family. My sister and my mom are also coming along with me. I would like to visit Buckingham Palace , Kensington Palace – Kensington Palace’s Orangery Cafe, and The Tower. I can get a percentage off for being disabled or having a companion, but I also would like a little extra for souvenirs. We would also like to have money towards, transportation, food and other necessities during our trip to London. Any little bit helps even if you donate $1. Thank you all for being generous towards my trip.”

If you would like to help Iris out, you can find her fundraiser page here.

Also on April 6, Victoria and Prince Daniel visited SVT. It’s adorable that Daniel has a photo of Estelle on his phone case, but maybe he should get a new one with a pic of both kids?

On Friday, April 7, there was an attack in Stockholm when a lorry was hijacked and driven into a store, killing four people – two Swedish, one Belgian, and one British. A further 15 people were injured in the attack.

King Carl Gustaf, who was in Brazil at the time, flew back to Stockholm and said in a press conference:

“First and foremost, I want to express my and the Royal Family’s thoughts go to the victims of this heinous deed. Fellows who have been injured and had been killed. We also think of their families and friends. We are familiar with them in their grief and anxiety. We are all shaken by what happened. It is also hopeful to see the care that people show each other. It demonstrates the power of our society. All of us who want to help are many more than those who wish us harm. That knowledge gives me comfort and confidence. Police, medical and rescue services have done an amazing job of minimizing the damage. Now it is important for them to continue working in peace and quiet. We have experienced several violent incidents in the past. We have done it then, and we should do now. Sweden is, has long been, and will continue to be a safe and peaceful country.”

Princess Madeleine posted on Facebook: “My thoughts go to my beloved Stockholm and the affected ones and their families.”

On April 8, Victoria, who was in tears, and Daniel visited the site of the attack and laid flowers. She briefly spoke to the press, saying:

“An enormous sadness. An enormous sadness. I feel an emptiness. However, it is still a force in any way. Society has been a tremendous force, and that we resist this, we want to resist. That we agree, that the Swedish society is also based on the tremendous trust, a community and cohesion. It will take us out stronger from this.”

When asked how Sweden moves forward from this, Victoria replied: “Together.”

103 thoughts on “Royal Round Up: Letizia, William, Harry, Beatrice, Victoria”