Kensington Palace released a statement yesterday concerning Pippa Middleton‘s wedding – the date (May 20) and the royals who will be in attendance (Prince William, Kate Middleton, Prince Harry, Prince George, and Princess Charlotte) – and in the press release they misspelled ‘Middleton’. 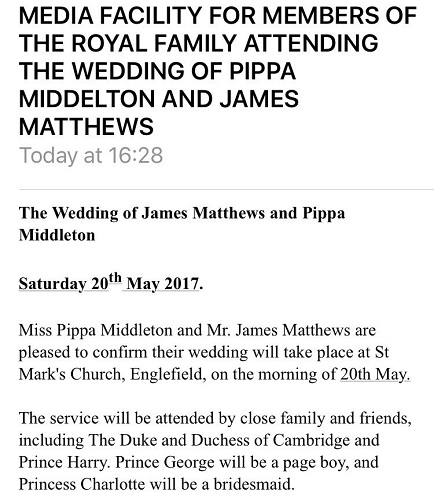 In case you cannot read from the photo, the statement says:

“The Wedding of James Matthews and Pippa Middleton

“Miss Pippa Middleton and Mr. James Matthews are pleased to confirm their wedding will take place at St Mark’s Church, Englefield, on the morning of 20th May.

“The service will be attended by close family and friends, including The Duke and Duchess of Cambridge and Prince Harry. Prince George will be a page boy, and Princess Charlotte will be a bridesmaid.”

KP/Jason misspelled ‘Middleton’ in the header of the statement, spelling it ‘Middelton’. This is humorous in a “KP is incompetent” kind of way, but it’s hilarious to me on a whole other level because I write the word ‘Middleton’ almost every day and I have accidentally spelled it ‘Middelton’ too many times to count. It’s an easy mistake to make, so I totally understand how this happened, but I always correct this mistake before I publish my articles so Jason should have proof read better.

Anyway, all the rumors and speculation has now been confirmed: Pippa is getting married on May 20; William, Kate, and Harry will be in attendance; and George and Charlotte will be in the bridal party.

The fact that KP released a statement about a private person’s wedding, though, is making waves in the royal press community on Twitter. Here are some comments from royal reporters and photographers. I love it when they go off on Twitter.

Peter Hunt @BBCPeterHunt, royal correspondent, had some shade: “This from @KensingtonRoyal press office who’ve taken on two more clients; clients who aren’t royal:” and “Until now @KensingtonRoyal have always insisted they don’t speak for Pippa Middleton”

Emily Andrews‏ @byEmilyAndrews, royal reporter, wrote: “V interesting that KP are doing PR for non-royals! Sensible to have media facility but they’ve always refused to help/comment before…” and “Pippa has a v experienced PR adviser. It cd have come from him… but it hasn’t… which is interesting.”

Dickie Arbiter‏ @RoyalDickie, former press spokesman for the Queen, said: “Very weird and unprecedented. By all means say the Cambridge’s en famile are going but as it’s private why is it being officialy announced” and “Can someone tell me why are @KensingtonRoyal have announced Pippa Middleton’s wedding when the whole day is private and she’s not a royal?”

James Whatling‏ @JWhatling, royal photographer, said: “I would have thought James Matthews has more than enough money to fund his own PR department…..” and “Getting married & worried about being upstaged? Best not have Prince George as a page boy and Princess Charlotte as a bridesmaid then! ?”

I think this is a bit of a no-win situation for Pippa. Pippa’s PR guy couldn’t just release a statement that the royals will be in attendance at her wedding without people yelling that she is overstepping her boundaries and being presumptuous because she and her PR guy don’t speak for the royals. But KP releasing the statement is bad because Pippa is not royal and KP shouldn’t be doing PR for a non-royal. So no-win here.