On the second and final day of the State Visit by the President of Argentina, Mauricio Macri, and his wife, Juliana Awada, to the Netherlands, Queen Maxima and Juliana visited Orange House in Amsterdam which offers advice, assistance and care for people who are dealing with domestic violence. They then visited the Centre for Youth and Family in The Hague, as well as Mauritshuis.

Maxima’s gorgeous purple coat is by Claes Iversen, and her shoes are Gianvito Rossi plexi pumps.

In the evening, the foursome attended a ballet performance at the Diligentia theatre.

Max does not disappoint in the bling department.

In the evening, the royals tiara-ed up for a State Banquet.

Queen Margrethe wore a beaded teal gown with the Danish Pearl Drop Tiara, pearl earrings, necklace, and brooch. She wore the sash of the Order of Leopold (Belgium) – the highest Belgium order. 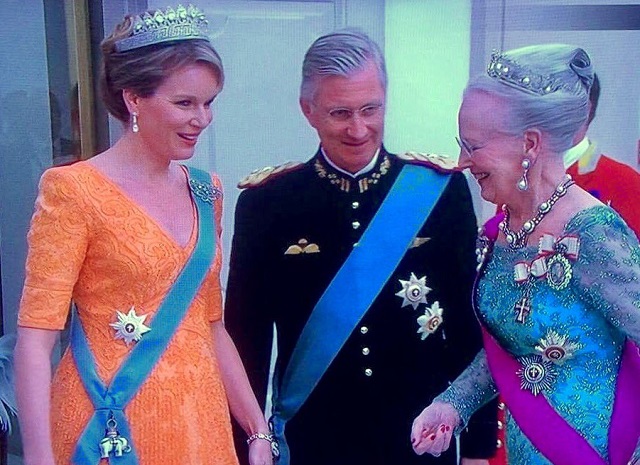 Crown Princess Mary wore the gold Jesper Høvring gown she wore to the New Years Banquet, and the Danish Ruby Tiara and accompanying earrings and necklace. Mary wore the sash of the Order of the Crown (Belgium), which is a lesser order to the one Crown Prince Frederik wore which was the Order of Leopold (Belgium).

Princess Marie wore a gold lace gown with the Danish Diamond Floral Tiara, and the sash of the Order of Leopold II (Belgium), a lesser order to the Order of the Crown (Belgium) which Prince Joachim wore.

In the evening on March 29, the Belgian couple hosted a reciprocal event for the Danes at The Black Diamond Library.

Queen Margrethe wore a repeated blue gown and that ugly fur wrap she loves so much.

Princess Marie wore a black beaded gown with a pretty scarf with a gold elephant design.

53 thoughts on “State Visit Round Up: Maxima, Mary, Mathilde”