Queen Margrethe‘s blue gown is a repeat from her 70th birthday celebrations, and her fur wrap is something we see every year at this event. She’s worn this gown so many times since she debuted it that I’m fairly sick of it by now. Margrethe is also wearing the Danish Pearl Drop Tiara, the stomacher from the Danish Crown Ruby and Pearl parure as a necklace, and the collar and star from the Order of the Elephant, as well as her Royal Family Orders.

Crown Princess Mary wore a gold Jesper Høvring gown which she previously wore in a portrait last year. It’s a gorgeous gown, and while I like the color combination with the cape, I would love to see the gown without it. The jewels are pretty much business as usual. The only jewels she has large enough to match the importance of this event are the Danish Ruby Parure, which she wore with the collar and star from the Order of the Elephant.

This dress on Princess Marie seems a bit out of character for her (in the limited exposure I’ve had to her fashion). Marie wore a new metallic Ole Yde gown with a ruffle on one side. Even with the ruffle, this gown is much more sleek than she usually goes for, which I appreciate.

Marie’s jewels are even more predictable than Mary’s, since this is pretty much the only tiara Marie has available. She wore the Danish Diamond Floral Tiara, the collar and star from the Order of the Elephant, and the Royal Family Order.

Here’s a video of the royals arriving.

Emperor Akihito and Empress Michiko, along with Princess Kiko, Princess Mako, and Princess Kako, showed up to the New Year’s ceremony at the Imperial Palace. 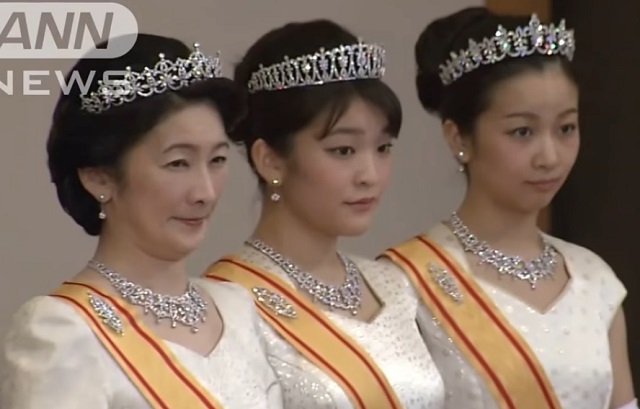 82 thoughts on “New Years tiaras from the Danish & Japanese royals”