Here is a round up of some tidbits and articles relating to Kate Middleton, Prince William, and Prince Harry.

“The Duchess is a great, positive role model for anyone interested in photography. She has proved her own skills with her portraits of her children, which are not just family snapshots. We exist to promote photography at all levels, whether it’s with a smartphone or a more expensive camera, and we’re here to help people improve their skills. So we hope that this will be the beginning of a future relationship with the Duchess because she has such a keen interest in the subject.”

Honestly, it’s hard for me to get worked up over this, especially after Christmas’ statement. This honorary membership is a PR move on the RPS’s part to promote that they are open to having people of all skill levels join their organization (as long as you’re will to pay the membership fee), not just professionals, and in that way offering an honorary membership to Kate makes perfect sense.

While Harry was in Africa this past summer working with African Parks on their 500 Elephants relocation project, he gave an exclusive interview and photoshoot to Town & Country. T&C spent six days with Harry in Malawi in early August (ending when Harry went to his cousin’s wedding). You can read the full article at Town & Country; here are a few quotes:

On African Parks: “I completely fell in love with African Parks because they get things done. They make tough decisions, and they stick to principles. I don’t go on safari. I come so I can surround myself with people [working in conservation] and support them.”

On hanging out with the crew: “I love spending time with these guys. Night after night, chewing the fat around the fire, about the pros and cons of the legalization of rhino horn, or the historic migratory paths of elephants, or the population explosion on the African continent. And also conservation back home, which is hugely important.”

On the fear factor: “I’ve done this a few times before. Also, I’m fatalistic. If something is going to happen to you, it will happen. And I have such a respect for wild animals that it’s a privilege to be around them. Plus, the army taught me teamwork.”

On the local people’s frustrations with the cost of conservation: “I completely understand those frustrations, which you would have too if you were constantly, desperately trying to provide for yourself and your family.”

On his relationship with Africa: “I first came in 1997, straight after my mum died. My dad told my brother and me to pack our bags—we were going to Africa to get away from it all. My brother and I were brought up outdoors. We appreciate the countryside; we appreciate nature and everything about it. But it became more… This is where I feel more like myself than anywhere else in the world. I wish I could spend more time in Africa. I have this intense sense of complete relaxation and normality here. To not get recognized, to lose myself in the bush with what I would call the most down-to-earth people on the planet, people [dedicated to conservation] with no ulterior motives, no agendas, who would sacrifice everything for the betterment of nature… I talk to them about their jobs, about what they do. And I learn so much.”

On working together on conservation: “Everyone has a different opinion; every country has a different way of doing things. But I do believe that we need a regulatory body so that everyone who owns or manages wildlife is subject to inspection and rated on how well they look after the animals and how the communities benefit. I know I’m going to get criticized for this, but we have to come together. You know what Stevie Wonder said: ‘You need teamwork to make the dream work.’ I use that a lot.”

On conservation parks and the future: “These are very special places, but they are islands with a sea of people around them. I do worry. I think everyone should worry. We need to look after them, because otherwise our children will not have a chance to see what we have seen. This is God’s test: If we can’t save some animals in a wilderness area, what else can’t we do?”

I get the sense when both William and Harry speak about their love of Africa, that they love it so much because they don’t have the responsibilities of being princes: they don’t get recognized, they are free to be themselves, they don’t have responsibilities to others, etc. Also, from what they’ve both said, I get the sense that Harry cares more about Africa and wildlife conservation than William does. I still think the “think of the children” line is missing the mark, but I appreciate that Harry understands why not everyone is as enthusiastic about conservation as he is. 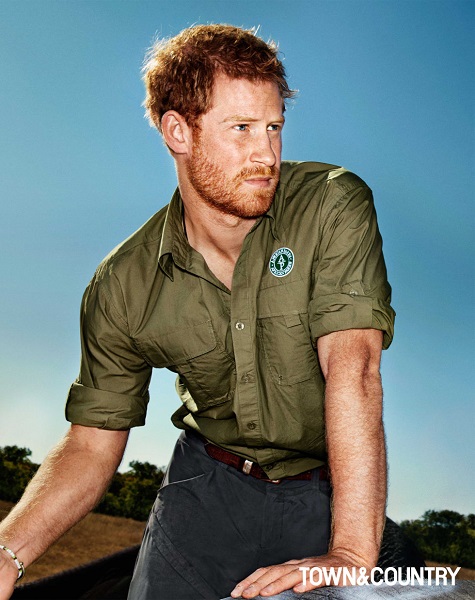