The annual Aret med Kungafamiljen (A Year with the Royal Family) aired on SVT last week. The program featured footage of the Swedish royal family throughout the year, as well as interviews with all of the royals, including: Crown Princess Victoria, Princess Madeleine, and Prince Carl Philip and Princess Sofia. 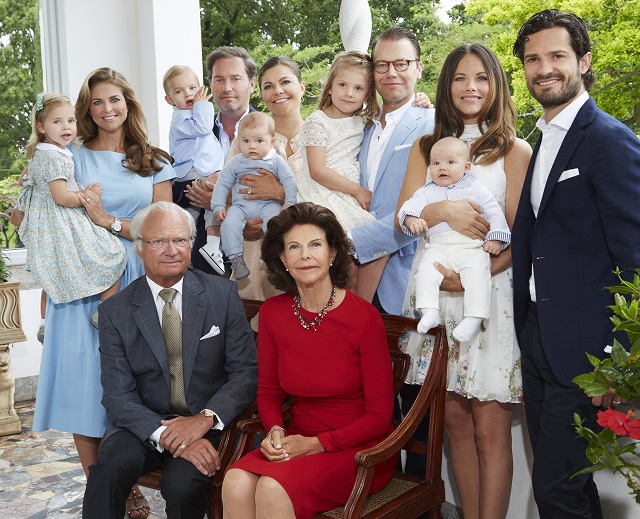 Additionally, the Swedish royal court released the above photo of the family for New Years with the message: “Gott nytt år!” (“Happy New Year!”). The photo was taken at Solliden Palace in July 2016. For clarification, this photo is different than the summer photocall they also did in July.

Now on to the Aret med Kungafamiljen interviews. You can watch the program at SVTPlay. For all of these interviews, I’ve painstakingly transcribed the Swedish captioning and then translated them with Google Translate. As always the Google translation isn’t always great, so I’ve edited the translations a bit to make the wording less wonky.

Crown Princess Victoria gave a sit down interview at her home, Haga Palace, on December 8. Victoria spoke a lot about the environment and her work with the UN, as well as on her father’s 70th birthday and her parent’s 40th anniversary.

On celebrating the King’s 70th birthday:

Victoria: “It gave an opportunity for reflection. Sure, we [celebrated], absolutely! Then [reviewed] very many pictures, as they say. All dad has stood for as a father, but also as the present picture and as king. I think of all that he has done so faithfully and so ambitious and so committed. But I also think what 70 years means for the development of Sweden. Everything was the means in terms of industry, culture and innovation. It was an occasion for reflection.”

On Victoria’s speech at the King’s 70th birthday:

Victoria: “The most important thing was to say, also on behalf of my siblings that we love dad as a father, and what he has meant to us. But also that we appreciate him for that ham has [been] as king.”

On what being a UN ambassador means:

Victoria: “It becomes a kind of ‘spokesperson,’ a spokesperson for highlighting the UN’s sustainability goals. They are 17 [goals].”

On the importance of the global objectives:

Victoria: “Extremely important! World countries have come together and finally agreed that we have huge problems with how we manage the Earth’s resources and that it must be changed. It is we who must change us and it must happen now.”

Victoria: “We must ensure that our ecosystems do not collapse and that biodiversity is not lost. A huge challenge is to be able to feed our population in the future.”

On keeping this her focus in the future:

Victoria: “It will be natural for me to focus on the marine case. It is something I feel very strongly that I focus more on that. The Baltic Sea is so complex. It looks so beautiful on the surface. With more information, you realize that it is feeling very bad.”

On how Victoria noticed how the Baltic Sea has changed:

Victoria: “One thing is the availability of fish. When I was little we fished pretty much outside Öland, Kalmar particular. You get up the other fish in the day – if you get the fish. Sometimes it is very short on fish. Then we have mucilage which I think most people who try to swim in the Baltic Sea suffer. You realize that you can not swim or you see water is not funny. It is so obvious that we can not ignore the fact that something has occurred. Something has happened to the Baltic Sea and we need to discuss it. It is only when you can not swim [you] become influenced by it. It gave birth to many good discussions with us. Estelle is four years [old], but you can talk to her about it. If the fish are not doing well and that we fish in an unsustainable way. We talked a lot about dead zones and anoxic bottoms. Of the world’s ten marine dead zones, so there are seven in the Baltic Sea. 20 percent of the bottom is oxygen deficient. Only bacteria living there. It was unbelievable. There are huge challenges, but it is also very much. We have the knowledge and technology. Sweden is in the front on many levels. I hope that by joining forces and an understanding that it is serious and it is urgent to gather issues and make a positive difference, an improvement.”

On her year and adding to her family:

Victoria: “[This] year has been tumultuous since we got a new family member. Fantastic to experience little Oscar! He is almost a year. There is a lot going on in the body. It is a great gift to have to follow a small child so close and see its evolution and all that it meant – it is great fun. To get one, a child, and the ability to give Estelle a sibling, it feels incredibly good. She is a good big sister – incredibly warm and inclusive. She has a lot of patience, so she’s a very good big sister. [Also], Prince Carl Philip and Princess Sofia had a young son. He is wonderful, little Alexander.”

On her parent’s marriage and her mom in particular:

Victoria: “It feels really nice that they have got to live side by side for 40 years. They have had the privilege, if you now say privilege, to work together. And it requires enough part … Mom has been the Queen of Sweden [for] 40 years. On the way she has been the queen and taking on Sweden and the people, the culture, the language and everything included in the package … It is amazing with what unite and with the energy that her mother made it. I admire her for that. She has not only tackled a man and a new country. a matter of course, she has taken in the country and made it hers.”

On what Victoria will take away from her mom and dad being King and Queen:

Victoria: “As a child [you see your] parents: ‘That I do not take with me. But that I might refine and manage.’ I have two very wise parents. Two very curious parents. I think curiosity is something I particularly want to protect, and at best also give [to] my children because that is a huge gift to be curious. Then I think the time will be easier.”

Princess Madeleine and Chris O’Neill gave an interview while in Gotland for their day of engagements in June with Princess Leonore. Their interview focused mostly on Gotland and horses and Leonore.

Chris: “We’ve only been here for a little while, but so far it’s so beautiful. It’s hard not to see that immediately. And flying over on such a clear day you saw the beauty of the island and of course the sea around it, so we look forward to the rest of the day to see more about the island.”

Madeleine: “And more visits to come.”

Chris: “More visits to come for sure.”

On the meeting with the horse:

Chris: “The horse? Very exciting. As you can see, Leonore, she’s full of energy, full of life, and horses are one of her great passions already, taking after her mother, so it can only be the start of a beautiful relationship.”

On what horses have meant to Leonore:

Madeleine: “Very much. If Leonore [likes] horses, we should encourage it. You get feet on the ground as a horse girl. You learn to take responsibility and to sometimes take a hard line. I think it’s important for girls of today to [learn to] speak up. It is good in many ways. The contact with [horses] also provide affection and respect for other creatures. So I’m very happy that she seems to like horses.”

On which horse Madeleine learned to ride on:

Madeleine: “It was a Gotland Pony named Travolta – a very strange name. Me and my siblings spent [a lot of] time on her. She learned a lot, which is to hold when she wanted to eat. It went over her head sometimes. Gotland Russ is voracious. You had to learn to hold on.”

Gotland Ponies can be fast:

Madeleine: “Yes, but they can be sluggish, too. Heidi seems to be a spirited foal. Her personality matches well with Leonore. It’s full speed with her.”

On the name of the horse Chris learned to ride on:

Chris: “Um, this was a small part of my childhood, though I think it was called Mr. Paint but it was not a horse that I had a big relationship with.”

Chris: “Mr. Paint, yeah. And I fell off him pretty quickly, so that was over. So a couple times when we’re down in Oland we ride together, or at least Madeleine teaches me to ride. These are on some of the chariot horses to they’re very, very large, very high and I don’t feel comfortable yet taking a big gallop, but I’m trying. I’m learning.”

Will Madeleine continue to work with issues related to horses?

Madeleine: “Absolutely. I have a great interest in equestrian sport. Although I do not ride much now, it is my heart.”

Prince Carl Philip‘s and Princess Sofia‘s interview was done when they were at the Hykjeberg nature reserve in Älvdalen in September. Predictably, their interview was all about nature.

On the bench they received as a wedding gift and the mountain in general:

Sofia: “We got the bench [at] the banns before the wedding, as a wedding gift. We got a beautiful picture as well so when we are not sitting here, we can look at the view at home. First time [we visited the reserve], we took a walk here. That was before we knew that we would get this gift. It was my way of showing up the whole river valley and the municipalities around it. I think I sold in Dalarna significantly that way.”

Carl Philip: “Absolutely! Hykje mountain is like a good descriptions of Dalarna. When you come up here and see this amazing view is thinking: ‘Wow, God, how beautiful!'”

Carl Philip: “We will spend time in nature so that he feels comfortable with being in nature and experience it.”

Sofia: “I think it comes naturally, in that we are very much in nature. We have fantastic scenery in Stockholm, too, so it will probably [be] natural.”

Carl Philip: “Our parents enjoy being in nature. It will be very obvious.”

Sofia: “Peace of mind when you live a busy life. You can not get it any other way. It for peace and balm for the soul. We need to preserve nature, so it is extremely important nature reserve. Nature may live [its] own life, without human involvement.”