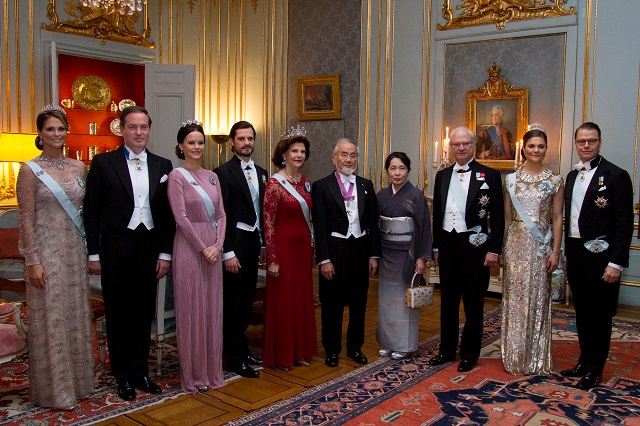 The King’s dinner for the Nobel Laureates is a tradition dating from 1904. The Nobel Prize was first awarded at a a ceremony in 1901 with a banquet following, and for the first few years that’s all that took place in Sweden as part of the Nobel ceremonies. But in 1904, King Oscar II implemented a separate gala dinner to honor the award winners: known as the King’s dinner for the Nobel Laureates. This separate gala dinner is held the day after the award ceremony at the Royal Palace. The royals welcome guests in the White Sea, and dinner is held in Karl XI’s Gallery.

Silvia went with red for the Laureates Dinner and wore one of her favorite tiaras: Queen Sophia’s Nine Prong Tiara. She wore diamond earrings and a diamond necklace, with a ruby and diamond brooch pinned to the Riband of the Order of the Seraphim. Silvia wore the Portrait of the King, of course. 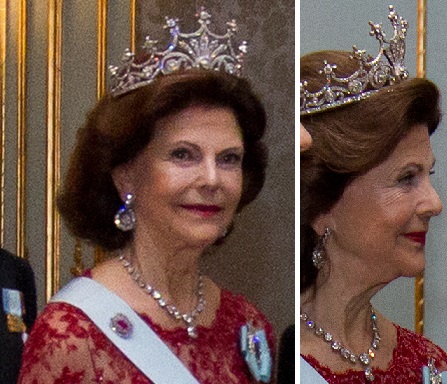 Victoria wore Princess Lilian’s Laurel Wreath Tiara, diamond earrings and a diamond brooch, and the Riband and Star of the Order of the Seraphim and the Portrait of the King. I think this tiara would work better with a different hairstyle. It seems like the kind of tiara that needs hair sitting behind it to really make it stand out. 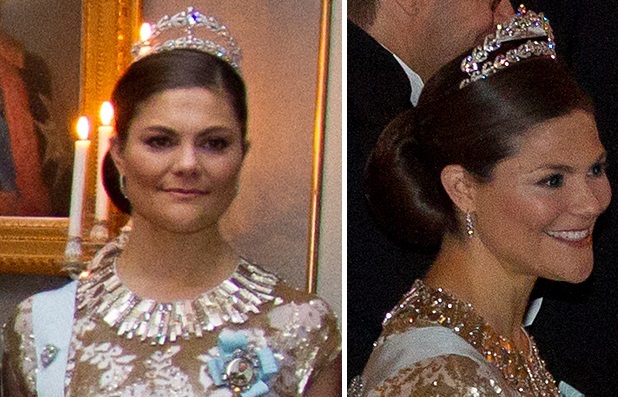 Sofia looked so much better on the second night of Nobel festivities than she did on the first. She wore a very pretty pink gown from Swedish brand Stylein.

She also wore the diamond earrings she wore to her wedding, the diamond brooch she wore to the Nobel Ceremony, and the Riband and Star of the Order of the Seraphim and the Portrait of the King. 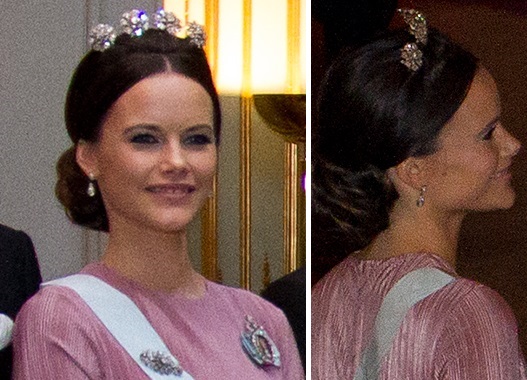 Madeleine was most improved for me from night 1 to night 2. Madeleine chose a repeated Valentino gown for the occassion. The gown is a custom version of a pre-fall 2013 gown.

Madeleine wasn’t content with just one tiara, apparently, so she chose the Modern Fringe Tiara as her tiara and the Connaught Tiara as her necklace. I think the tiara-as-necklace would have worked better with a different gown, but it’s always awesome to get a double tiara appearance in one go.

Madeleine also wore diamond earrings and a diamond bow brooch, along with the Riband and Star of the Order of the Seraphim and the Portrait of the King. 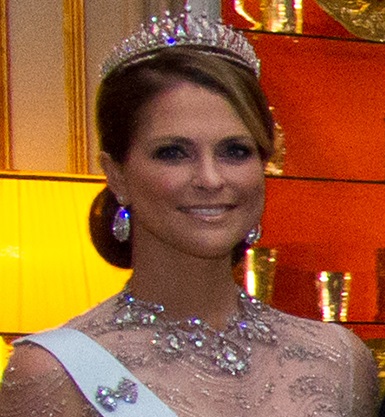 The Swedish royal website never did post the menu for the Nobel Banquet, but they did for the Laureates Dinner:

60 thoughts on “Swedish Royals at the Nobel Laureates Dinner”