Here’s a Royal Round Up of two ladies we haven’t talked about in a while and three ladies we just talked about recently: Queen Letizia doing stuff for the Princess of Asturias awards; Camilla, Duchess of Cornwall at the Man Booker Prize; Princess Eugenie at an event for Elephant Family; Princess Charlene at the Princess Grace Awards; and Princess Sofia in a meeting with child rights organizations.

Here is a parade of fashion from Queen Letizia during events surrounding the 2016 Princess of Asturias Awards.

On October 21, Leti and Felipe met with the 2016 Princess of Asturias Award laureates at the Reconquista Hotel. Letizia wore a Carolina Herrera printed sheath dress which she debuted last month, and a new pair of red Magrit pumps.

Also on October 21, Felipe and Leti, along with Queen Sofia, attended the 2016 Princess of Asturias Awards ceremony at the Campoamor Theater in Oviedo. Leti wore another new Felipe Varela dress, this one a nude dress with a hand embroidered tulle overlay with black Swarovski crystals. Leti accessorized with her black Felipe Valera satin clutch, a new pair of nude suede Magrit “Vanessa” sandals, and de Grisogono black diamond teardrop earrings.

On October 22, Felipe and Letizia visited the Los Oscos Region which was honored as the 2016 Best Asturian Village. Leti wore a fuchsia coat by a local designer, Marcos Luengo. It’s a bespoke design of a coat from the AW16 collection. Leti wore her Chanel Comète Earrings.

Camilla, Duchess of Cornwall attended the 2016 Man Booker Prize at Guildhall on October 25. Camilla gave a speech before presenting the winners with their awards. Camilla said in part:

“Ladies and Gentlemen, once again, I’m delighted and honoured to be asked to this most exciting of literary evenings. In September this year my husband and I joined the 500th anniversary celebrations of the Royal Mail and – if I may quote him – he made the point that the Royal Mail ‘by its very existence, defends the written word’. When I was thinking about what I wanted to say this evening, I realised that the Man Booker Prize also defends the written word. Every year, the Prize honours the immense range of people writing in the English language and acknowledges that there are readers, from all over the world, eager to broaden their horizons.”

You can read her full speech here.

Princess Eugenie and her boyfriend Jack Brooksbank attended the opening night of ‘Conservation Couture: The Animal Ball Collection’ in aid of Elephant Family and supported by Swarovski at the Victoria and Albert Museum on October 25.

Elephant Family is collaborating with the V&A to display an exclusive collection of couture masks, created by the world’s greatest fashion houses and inspired entirely by the animal kingdom. The masks will be on display at the V&A for a limited time in an area of the Museum not usually open to the public, the Cupola. The display is a prelude to Elephant Family’s 2016 fundraising event in November, The Animal Ball.

Eugenie attended the opening night and gave a speech. She read an extract from Mark Shand‘s (Camilla’s brother) book, and then said: “For many years now I have been a huge supporter of Mark Shand and all his work with Elephant Family. His legacy lives on with all the wonderful work the charity does for saving these beautiful creatures.”

The gala was sponsored by Christian Dior Couture, so of course Charlene wore Dior Couture. She wore a white, long-sleeve gown with four-leaf clover (among other leaves) on the skirt and one on the chest. The dress is custom but the four-leaf clover pattern is from the Christian Dior Spring 2017 Ready-to-Wear collection. Charlene also wore some really gorgeous diamond chandelier earrings.

I kind of really love this pattern, but I’m not sure I like the shape of the top part of Charlene’s dress.

On October 25, Princess Sofia joined Queen Silvia at the Royal Palace for a meeting with The Children’s Ombudsman and other big children’s rights organizations, such as: Save the Children, UNICEF and the World Childhood Foundation. The workshop, “Our refugee – Our Time challenge”, is about the challenges of unaccompanied refugee children and young people in Sweden and how many suffer from mental illness.

This is a follow-up meeting. The initial meeting was held in March of this year – both Silvia and Sofia attended (which apparently I did not cover). During this meeting all invited organizations presented changes that have occurred in their own activities related to refugee children in Sweden. Silvia ended the meeting by saying: “Organizations can not do everything on their own, but together we can achieve so much.” 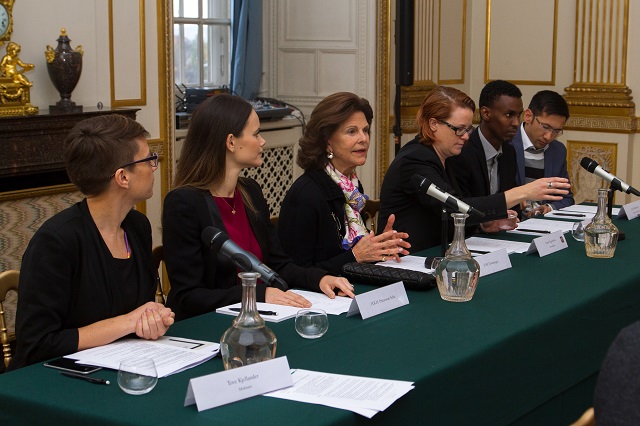 On a fashion note: I really wish Sofia would stop wearing these black booties with pants that stop at her ankles. It’s just not a good look. 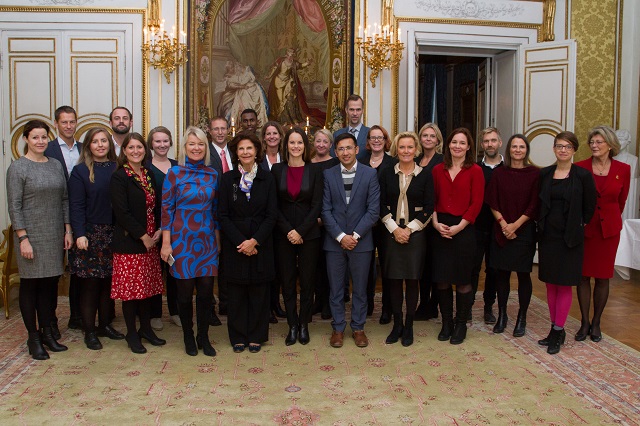 76 thoughts on “Royal Round Up: Letizia, Camilla, Eugenie, Charlene, Sofia”