Crown Princess Victoria was in New York City this entire week, September 19-23, as part of her work with the United Nations and Agenda 2030.

Victoria started the week on Monday with a visit to the Capsule Fashion Trade Show where she met with Swedish brands and designers who were showing their products.

Victoria wore a new zebra print dress from Whyred called the “Loise Print” ($312), and earrings from Ebba Brahe Jewellery. It’s cute and looks good on her. The black By Malene Birger sandals aren’t so cute.

Victoria then moved to UN Headquarters where she attended the high-level meeting Summit for Refugees and Migrants. Sweden co-chaired Round Table 5 “Global compact for safe, regular and orderly migration: towards realizing the 2030 Agenda for sustainable development and achieving full respect for the human right of migrants”.

In the afternoon, Victoria attended the meeting “Mobilizing action to implement SDG 14 in the run-up to the UN-Conference on Oceans in 2017” which was held at the Swedish Permanent Mission to the United Nations in New York.

Victoria’s second outfit is a top and skirt by Baum und Pferdgarten (Victoria wore the top in a photo with Oscar from back in March). Her pumps are By Malene Birger and her bag is Valentino.

Day 1 of Victoria’s week in New York ended with a reception for the Global Deal held at the Consul General’s residence. She wore a Fadi el Khoury dress. 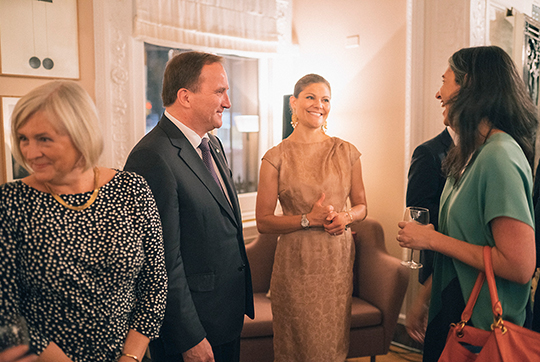 Victoria was photographed out walking with Prince Oscar early in the week.

On Tuesday, September 20, Victoria attended the opening of the UN General Assembly’s 71th session and for the initial general debate, which had the theme The SDGs universal push to transform our world.

Victoria’s dress is a repeated Oscar de la Renta, and her earrings are from Kreuger Jewellery.

Victoria wore a black shirt and Baum und Pferdgarten floral skirt. She wore her Lara Bohinc “Saturn” earrings (which Princess Sofia may have borrowed back in June), and the “Lunar Eclipse” necklace ($851) and “Solar Eclipse” bracelet ($586.50) from the company. Vic chose black Marchesa “Stella” heels which Princess Madeleine wore in nude to Vic’s birthday in July.

On Thursday, September 22, Victoria had meetings with the ambassadors of the Sustainable Development Goals (SDG) Advocacy Group. Victoria said:

“As always, it is very rewarding and inspiring to attend the Youth Week here in New York. In my meetings with the other SDG ambassadors I have specifically raised questions concerning water and health, which is the goal I will follow and work extra to come. UN global sustainability affects all of us. In order to manage to meet them requires not only a high tempo, but also to all sectors of society involved. Sweden is probably one of the countries fastest can cope with targets, but there remains a lot of work for us.”

Vic’s dress is Ralph Lauren and her earrings are Kreuger Jewellery.

In other Swedish royal news, Member of Parliament Robert Hannah wants to cut the appanage for the Swedish royal family down to just the monarch and heir. From aftonbladet:

“During the next year, the royal family will receive a grant of just over 137 million [Editor’s note: about 16 million USD], the amount is expected to increase 145 million [Editor’s note: about 16.9 million USD] in 2020. About half of the sum goes to maintenance and management of buildings and heritage, while the other half is used for the royal family’s representative, state visits, trips and living expenses. The royal family has grown from six to twelve people in recent years and the cost of safety, weddings and baptisms have been increasing.

“Member of Parliament Robert Hannah (L) want to see that appanage restricted to apply only to the Head of State and the heir to the throne. ‘It is unreasonable that the state should support such a large royal family when they have the ability to feed themselves. Swedish taxpayers’ money makes much greater benefits, for example through support and services to people with disabilities or lone parents than to one of Sweden’s wealthiest families’ he wrote in a motion to parliament.

“How the appanage is regulated is not currently regulated by any law – it is the king who decides. Robert Hannah writes in the motion that he thinks it is poor management of taxpayers’ funds. ‘The system needs to be reviewed and clear rules about who gets part of the appanage and what it will go to need to be developed. Taxpayers should not pay for the royal family shopping sprees.’ He says in the motion that just because the royal family’s number has doubled, it does not mean that their mission and the workload has increased. ‘Only the head of state and the heir to the throne should be supported by the state through appanage. The appanage should also be reduced significantly.’