Here’s another royal round up, with: Prince Harry in Aberdeen, Scotland; Prince William gaving a speech at the Tusk Trust ‘Time for Change’ event; and Queen Letizia out and about.

I’m starting with Prince Harry because I know many of you like him. Harry was in Aberdeen, Scotland on September 20 for a visit to Mackie Academy, Streetsport at Robert Gordon University, and Transition Extreme Sports.

While at Mackie Academy for a youth mentor training event which was part of The Diana Award “My Mentor” program, Harry spoke about his mentor who helped him gain confidence: his Colour Sergeant from his 2005 entry to Sandhurst military academy. Harry said:

“I was at a stage in my life when I was probably lacking a bit in guidance. I lost my mum when I was very young and suddenly I was surrounded by a huge number of men in the army. He was someone who teased me at the right moments and gave me the confidence to look forward, to actually have that confidence in yourself to know who you are and to push forward and try to help others.”

Harry spoke with Diana Award recipient Jamie McIntosh, 17, who received the award for writing a book to help teenagers deal with grief after the death of his mother to breast cancer:

“That’s what’s it all about, it’s trying to stop other kids in your position having to go through what you had to go through and now your book is going to help everyone around you. If anybody around me ever has any grief, especially close family, you feel as though you can help because you’ve got the experience and that’s what mentoring is all about.”

These photos are of Harry at Streetsport initiative at Robert Gordon University.

Prince William, as Royal Patron of Tusk Trust, gave the keynote address at the Tusk’s ‘Time for Change’ event yesterday, September 22, at The Shard in London.

William gave his speech about the diminishing elephant population. For space, I’m only quoting part of the speech – you can read the full speech here.

“When I was born, there were 1 million elephants roaming Africa. By the time my daughter Charlotte was born last year, the numbers of Savannah elephants had crashed to just 350,000. And at the current pace of illegal poaching, when Charlotte turns 25 the African elephant will be gone from the wild. And the risk is not just to elephants. Today is World Rhino Day. A species that, due to demand for its horn, is being killed at a rate of nearly three animals a day. Rhinos face extinction in our lifetimes as we struggle to correct lies about the supposed benefits of using its horn as a drug. However, this crisis is not just about animals – this crisis is also about people. It is some of the world’s poorest people who will suffer when their natural resources are stripped from them illegally and brutally. It is families in the world’s most vulnerable regions who suffer when two rangers are killed every week on the frontline of this fight. It is fragile democratic systems in many nations that are at risk from the scourge of violence and corruption that the illegal wildlife trade fuels. Ladies and gentlemen, I am not prepared to be part of a generation that lets these iconic species disappear from the wild.

“I am not prepared to explain to our children why we lost this battle when we had the tools to win it – and I know that none of you in Tokyo, Johannesburg or here in London want this either. I fear we will not know what we have lost until it has gone. But there is hope – we can do something. There is huge momentum building from governments, businesses, conservationists, and the public to take the steps required to stop the killing. […]

“Indeed I would challenge anyone who knows the truth of how these wildlife products are obtained, to justify desiring them. Materialistic greed cannot be allowed to win against our moral duty to protect threatened species and vulnerable communities. This is not just an issue for people on the other side of the world – the British Government announced yesterday that it is looking closely at this issue in respect of our own domestic trade. Wherever we are in the world, we must all play our part. The opportunity that the CITES conference presents to halt the illegal wildlife trade will not come round again for another three years.

I sincerely hope that the Parties are able to unite around an unmistakable message to the world about the crisis in which we find ourselves – in my personal opinion, a tightening and not a loosening of the rules around the international trade in ivory and rhino horn. Mixed messages about the viability of trade in elephant or rhino parts would surely serve only to confuse wouldbe consumers at this crucial time. We cannot undo the mistakes of the past. But we can and must take moral responsibility for the decisions we make today.”

I rolled my eyes when William mentioned Charlotte, so I’m really glad he actually mentioned other reasons why people should care about the diminishing elephant population. I don’t know if William’s speeches actually accomplish anything significant, but it was a good speech.

I have to wonder, though, about Kate receiving the Royal Family Order. Many people thought Kate would be wearing it when she attended the State Banquet for China last October, and I’ve seen people speculate that Kate will be wearing it by the time she attends her next white tie event. BUT, the Royal Family Order is painted on ivory. William just said “We have the opportunity to end… the mixed messages we have sent for too long about the value and desirability of wildlife products.” Even if Kate wore a recycled RFO, it would still be a GIANT mixed message for William’s wife to wear ivory when he’s calling for an end to the ivory trade and saying “We have the chance to say that ivory is a symbol of destruction, not of luxury.”

So I wonder: Will Kate ever wear the Royal Family Order? To keep in line with William’s message, I don’t think she ever can – lest it show William’s hypocrisy.

PS. Do you remember when William took off to Kenya over Easter weekend without Kate and the kids to go to Jecca Craig‘s wedding? Well he also meet with the Kenyan President and saw “first-hand some of the longstanding conservation and anti-poaching initiatives taking place in Kenya” on Lewa Conservancy – which was founded by Jecca’s family. Chris Jackson, Golden Boy, went with William and took photos of William doing his hands-on conservation work. Here are a couple photos that I totally missed back in March. William’s all, “SEE, I can do hands-on African conservation work, too!”

PPS. William will visit Vietnam from November 17-18 at the invitation of the Foreign and Commonwealth Office for the third International Wildlife Trade Conference which will be hosted in Hanoi. William will also have the opportunity to engage with local people and leaders in conservation while visiting the country.

Here are some photos of Queen Letizia from recent weeks. On September 22, Leti attended an event in association with World Cancer Research Day and the Spanish Association Against Cancer. She gave a short speech. 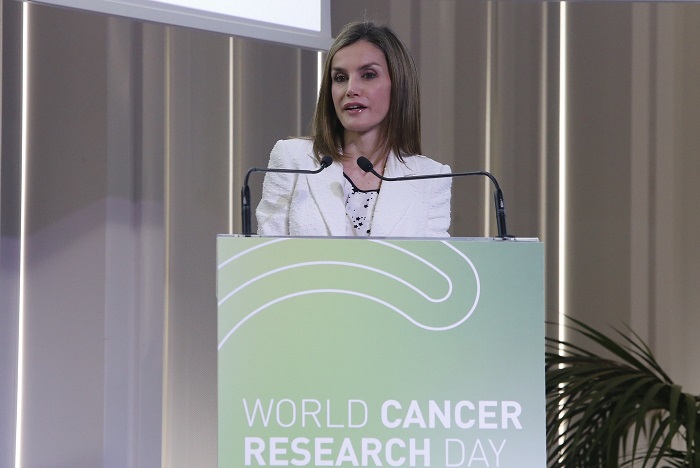 On September 15, King Felipe and Letizia attended the Royal Theatre opening season concert. September 15 is Leti’s birthday, and the musicians performed a song for her birthday.