Also on August 4, Buckingham Palace released an update, in the form of a video, on Sophie, Countess of Wessex‘s training for her DofE Diamond Challenge which will see her cycle 445 miles from Edinburgh to London. 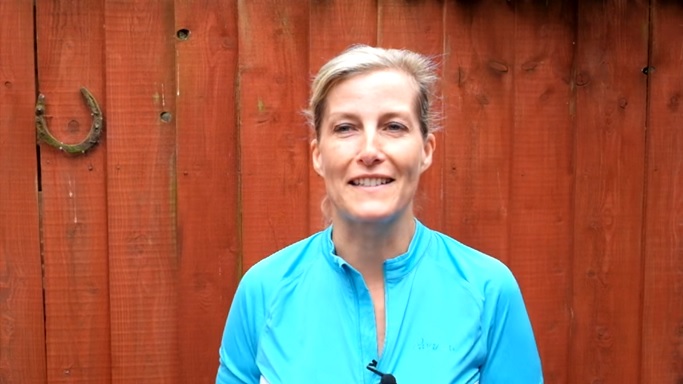 From September 19-25, Sophie will cycle with a team of six experienced cyclists from the Palace of Holyroodhouse in Edinburgh to Buckingham Palace in London, covering 445 miles.

The video update was filmed during a recent training session, and Sophie had this to say about her training and Challenge:

“I think if you’d asked me a few months ago that I would be able to do 60 miles I think I probably would have laughed, but here we are I’m doing 60 miles. It’s been hard, it’s probably harder than I thought, and there have definitely been moments when I’ve thought what on earth I have decided to do.

“The team I’ve got behind me, there’s seven of us riding all together and really the role of the team is to basically support me in what I’m doing. They are all experienced cyclists; I’m not. They know what they’re doing; I don’t. They know how to get me from one point to the next. And actually riding in a small peloton that we will be doing, they’re providing a bit of windshield for me, a lot of chat to distract me, and a lot of encouragement up the hills. And it’s great because we’ve cycled quite a lot together now which is really nice because they’re all from all points of the country, and they’re really just there to get me from A to B. They’ve been incredible, and huge enthusiasts, and to be honest with you I could not be doing this now if it wasn’t for them.

“The Challenge is of course to raise money for the Duke of Edinburgh’s Award 60th anniversary. They asked me a long time ago if I would think about doing a challenge for the Diamond Appeal which is why I came up with this idea, so the idea is to raise funds for the Diamond Appeal which will be supporting particularly the disadvantaged and disabled young people to gain access to doing the Duke of Edinburgh’s Award.”

I like these training updates, and I really like hearing Sophie talk about her training and Challenge in her own words, rather than a press release or something. I really just like it whenever a royal actually says something in their own words since for the most part we only engage with them silently through photos.

As of time of posting, Sophie’s JustGiving page has raised £65,172.