Crown Princess Victoria celebrated her 39th birthday yesterday, July 14, and Sweden celebrated with her on what is known as Victoriadagen (Victoria Day). 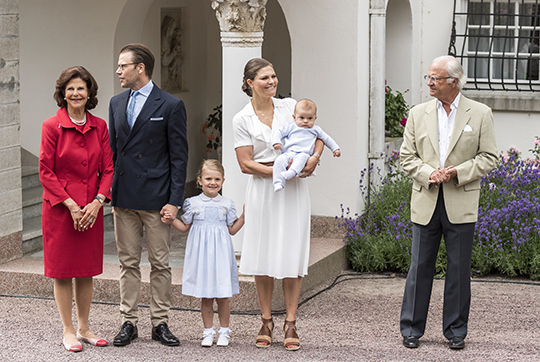 More than 4,500 people gathered in front of Solliden Palace on Öland to wish Victoria Happy Birthday. Victoria, joined by her parents, King Carl XVI Gustaf and Queen Silvia, and her family, Prince Daniel, Princess Estelle, and Prince Oscar, met the waiting crowd and gave a little speech to say thank you. The crowd sang “Yes, may she live”, and the King led a round of cheers. 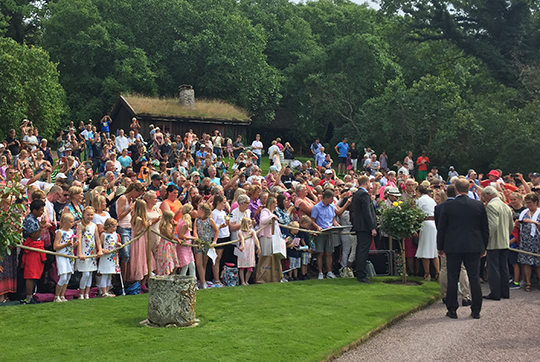 Victoria wore the same white Ralph Lauren dress she wore in the National Day photos. Her (ugly) brown shoes are from Zara.

Estelle is wearing the same blue dress she wore in the photo released in March of her holding Oscar. The dress is one of Victoria’s from when she was a child which she wore to the Te Deum for Madeleine’s birth.

They should have given Oscar a balloon like Estelle to keep him from getting bored.

In the evening, the royals rode in a carriage procession from Solliden Palace to Borgholm where they attended the Victoria Day concert. In a nice little surprise, Estelle attended the concert for the very first time.

You can watch the hour and a half long program over at SVTPlay.

Estelle wore pink ear protectors, but she didn’t seem too thrilled with the concert.

Both Victoria and Silvia wore the traditional costume from Öland. Only Silvia and Victoria have this costume, the other ladies wear normal clothing.

Prince Carl Philip, Princess Sofia, Princess Madeleine, and Chris O’Neill joined the family for the concert in the evening.

The Swedes always take a vacation in July and August, so there won’t be many updates from them for a while. Sofia has an appearance on August 4 and August 27, and then there’s Alexander’s baptism on September 9. So far their schedule is pretty light in September also with Victoria scheduled for a meeting on the 26th, and Sofia scheduled for an opening on the 27th.