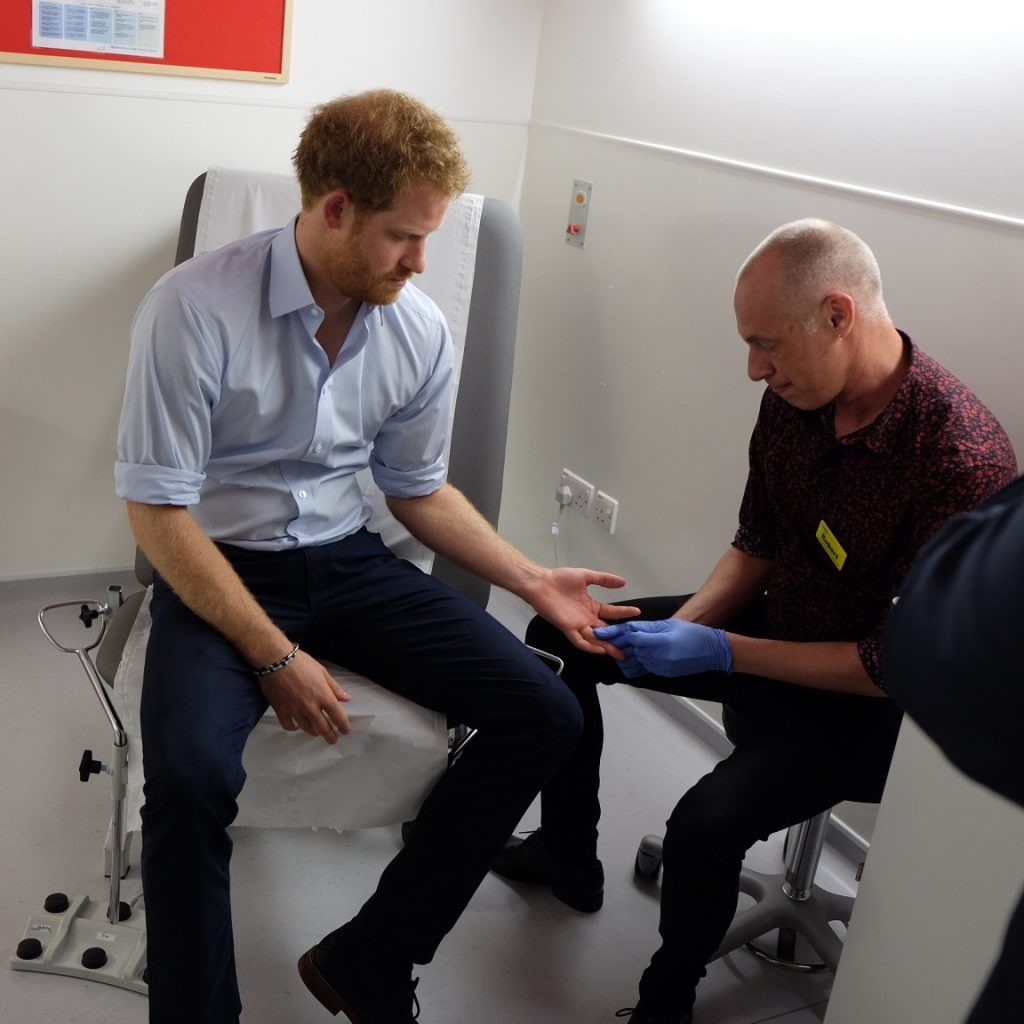 Robert Palmer from Guy’s and St Thomas’ administered Harry’s test, which involved a prick of the finger and a minute-long wait for the results. I’m embedding the video below, but here’s a run-down from the Daily Mail:

“‘We call it either a reactive or non-reactive results,’ [Palmer] tells the Prince. ‘If it was reactive it would be sent to the lab to confirm the result.’

“Responding to this, Harry admits he is nervous. He said: ‘Even being the person I am and knowing the type of people I’m around, I’m still nervous. Which is interesting.’ Mr Palmer says it is not surprising that he is nervous as there is a fear in ‘not knowing’ – but says it is his job to reassure anyone coming in for a test.

“After Harry washes his hands, his finger is pricked and the swab is put into a special machine. A minute later, it is revealed his test is negative. ‘It’s amazing how quick it is – some people wait months for a blood test result,’ he said.

“Had the result been positive, Mr Palmer explains they would have a conversation about it. Then, Harry would then have been sent for a blood test to confirm the diagnosis.

“Mr Palmer worker reiterated that many people taking daily medication to manage their HIV lead ‘long, full lives’ with a partner and a healthy sex life.

“Harry added: ‘Gay, straight, black, white, ginger, whatever – why wouldn’t you just have a test? We all shouldn’t be on the other side of the river saying “you should get the test”, it should be normalised, everybody should get it.’

“Clinics in London and throughout the country offer the rapid result tests, Mr Palmer explained. In other places, people going to be tested will have a blood test and can expect the results within a day or up to a week later.”

Here is the video of Harry getting tested. What the DM doesn’t tell you is that Harry kept talking to Palmer throughout the test, asking questions and getting him to explain why people should get tested. Harry was actually a really good “host” in that he and Palmer discussed the issue rather than just doing the test.

“Prince Harry’s decision to take an HIV test, live on social media, is a groundbreaking moment in the fight against HIV. Not only does it show His Royal Highness’s genuine and personal commitment to tackling the HIV epidemic, it will amplify a message to millions all over the world: testing for HIV is easy, quick and nothing to be feared.

“We have a real opportunity to end HIV transmissions in the UK, but it starts with each person knowing their HIV status. Too many people are either put off testing by the stigma that still surrounds HIV, or simply do not think HIV is an issue anymore.

“Today, Prince Harry has got people talking about HIV again and has normalised HIV testing to a global audience. In doing so, he could inspire a generation to take control of their sexual health. Thanks to treatment, testing for HIV could stop you from getting seriously ill, enable you to live a normal lifespan and prevent you from passing the virus on to anyone else. That’s why it’s so invaluable to have Prince Harry’s support as we aim to bust stigma and end the HIV epidemic.”

Palmer made similar comments about Harry getting tested in the below video KP posted to their Twitter account:

“I think it’s really important for someone like Prince Harry to be tested. I think it normalizes the testing process and let’s everybody know that it’s a simple test really it doesn’t take very long. It’s important to know your HIV status. What we do know is it’s not the people who are HIV positive who are passing the infection on, it’s those who do not know their status, they’re fueling the epidemic. And what we want to do is get those people into the clinic and I think for Prince Harry to come along today and let it be known that even a Prince can have an HIV test then everybody can have an HIV test.”

At the end of 2014, around 103,700 people in the UK had HIV with around 6,000 testing positive for HIV each year. The fastest growing group of people living with HIV are those over the age of 55. It is estimated that 1 in 6 people in the UK with HIV don’t know they have it.

Websites to find HIV testing locations in the UK and US:

I think Harry getting an HIV test live for everyone to see is actually a great idea – not only does it put HIV testing in the news, but it really does help break down the stigma associated with getting tested. Also, it is clear that Harry is knowledgeable and passionate about this subject. Huge pat on the back to Harry for doing this.

Next Wednesday and Thursday, Harry will be in South Africa for the International AIDS Conference where he will speak about the stigma surrounding HIV/AIDS and how the younger generations need to take leadership in the fight against HIV/AIDS.