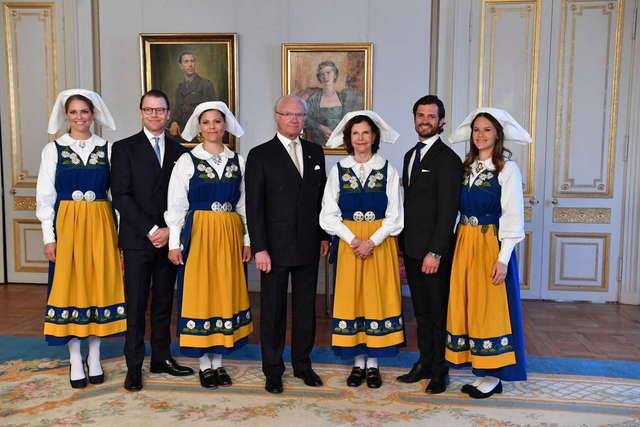 The National Day of Sweden was established in 1915 as Swedish Flag Day, and in 1983 Flag Day was merged to form National Day. National Day is celebrated on June 6 to mark two historical events: the date Gustav Vasa was elected King in 1523 and the date the Constitution Act was signed in 1809.

To celebrate National Day, the women dress in traditional national dresses of blue and yellow (as opposed to regional dresses), while the men wear normal suits. Sofia got to wear the kerchief this year because she’s now married. There are traditional outfits for men, so why the king and princes don’t wear them is curious. 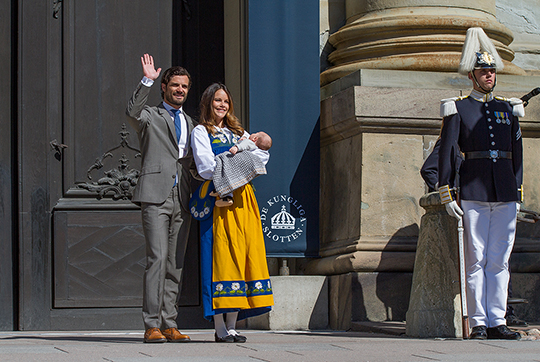 The day of engagements started with Prince Carl Philip and Princess Sofia opening the Royal Palace – which means the Palace is open to the public for free all day, with tours and music and events for the public to attend.

Carl Philip said: “Ladies and gentlemen, dear National Tourists! Warm welcome at the Royal Palace. Today it is open castle and here you can also visit West Gate, which is newly renovated. You can also visit Logården, which of course is not normally open.”

Sofia said: “Just Logården is very special for us because it was where we announced our engagement and where we received the warm warm cheers after our wedding.”

Prince Alexander made his National Day debut with his parents at the Palace opening, just like Princess Leonore did back in 2014.

Crown Princess Victoria and Prince Daniel attended a citizenship ceremony in Nacka Town Hall. During a speech at the ceremony, Victoria said:

“Today, we welcome you as a new Swedish citizen. But the National Day also calls for reflection by all Swedes. Old and new.

“Many people have come to our country. At a time of conflict and distress, Sweden is a sanctuary. A safe haven in a troubled world. It is a valuable reminder to appreciate and to uphold the values ​​that are the basis for Sweden’s prosperity.

“In over two hundred years we Swedes lived in peace and freedom. We are free to live and work in a democracy. Free to choose our future together. These freedoms, we must not take for granted. […]

“You are now the Swedes. By citizenship, you have the same rights as all other citizens. When you see the Swedish flag waving in the wind so carry with you the feeling you know today. The joy and pride of a community. A community of openness. In democracy. in tolerance. And in caring for each other.”

In the evening, the Swedish royals (minus Chris O’Neill, and the kids not named Estelle) traveled by carriage from the Royal Palace to Skansen for a concert. To end the day’s festivities, the King and Queen hosted a reception at the Royal Palace for government representatives and diplomatic corps.

I love it when royals hold hands.