In feel-good news, Prince Harry kept his promise to an Invictus Games competitor who asked him to give her gold medal to Papworth Hospital in London. He delivered the medal to the hospital team yesterday, June 1. The rest of this royal round up includes a sprinkling of people we haven’t talked about in a while: Duchess Camilla, Queen Letizia, Princess Eugenie, and Queen Rania.

Prince Harry made good on his promise to American Sergeant Elizabeth Marks to deliver her Invictus Games gold medal in swimming to Papworth Hospital – the hospital which saved her life two years ago.

The KP Twitter account tweeted about the meeting, and Marks replied with: “Thank you so much for posting photos. It meant the world to me. So happy Papworth received their medal.?”

Here’s a video of Marks giving her medal back to Harry.

Elizabeth dedicated her medal to @PapworthHosp @InvictusOrlando after they gave her lifesaving treatment in 2014 pic.twitter.com/8IuOEgnGPG

Camilla, Duchess of Cornwall attended the wedding of Lady Charlotte Wellesley (daughter of the 9th Duke of Wellington) to Alejandro Santo Domingo. Why Camilla is wearing white to another person’s wedding? Your guess is as good as mine.

Lady Charlotte wore a structured off-the-shoulder Emilia Wickstead wedding dress and cathedral-length veil embroidered with polka dots as she married Alejandro in Íllora, Spain, just north of Granada. I don’t know why everyone is flipping out over this wedding gown: I think it looks terrible. The heavy fabric and long sleeves just don’t go with the off-the-shoulder for a May wedding in Spain. And those flaps! I can’t stand those flaps, and the super heavy-looking train. Yeah, no. Just no. 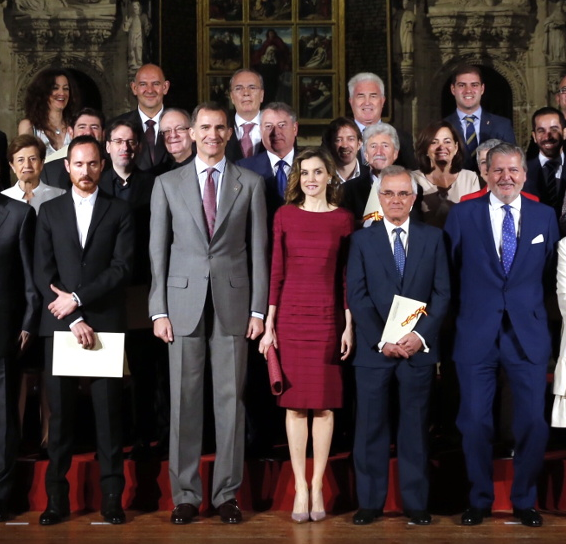 Queen Letizia and King Felipe attended the delivery of the “National Culture Awards” – which express the recognition for the contribution to the enrichment of the cultural heritage of Spain in areas such as Fine Arts, Cinema, Literature, and Bullfighting.

Letizia pulled out a tried and true favorite Felipe Varela custom pleated purple cocktail dress that she has worn five times now. I really like this dress, so I’m totally cool with Letizia rewearing it however many times she wants. It seems like Letizia is growing out her hair from when she cut it to a bob; I really like this length on her.

Princess Beatrice and Princess Eugenie joined their father, Prince Andrew, at a Buckingham Palace Garden Party for ‘The Not Forgotten Association’ on May 26. The Daily Mail called these looks from the York Princesses “fashion fails”, but I think Beatrice actually looks pretty good here – much better than she did on May 24 – and I love Eugenie’s hat. Beatrice wore a Roksanda Ilincic dress which Queen Rania wore back in 2015. I think the dress looks good on both ladies, and that’s saying something since I don’t usually like Roksanda designs.

Eugenie attended the ‘End of Silence’ charity event at Abbey Road Studios in aid of Hope and Homes for Children on June 1 in London.

Queen Rania celebrated Jordan’s 70th Independence Day on May 25. Here she is with her son, and former Hot Guy of the Month, Crown Prince Hussein.