Kate Middleton stuns in red at Order of the Garter 2016

There isn’t much to talk about with Order of the Garter except history and who attended – especially this year since the parade got rained out – so I’m going in with fashion first since I was so darn excited when I saw photos from this event. I put it right there in the title: Kate Middleton stunned in red at the Order of the Garter ceremony yesterday, June 13.

I think Kate looks stunning here, to the point that I think this is the best that Kate has looked in literally years.

This outfit is full of repeats: A bespoke red Catherine Walker coat and dress from the Canada tour in 2011; a bespoke red Lock & Company hat from the Diamond Jubilee Flotilla in 2012; bespoke Robinson Pelham diamond acorn earrings from the royal wedding in 2011; diamond bracelet thought to be a gift from Charles first seen in 2011; Mappin and Webb “Empress” necklace first seen in 2014; red Alexander McQueen clutch from 2012.

All of these repeated items were put together with one new item – red suede Gianvito Rossi pumps ($670.00) – to create a fantastic outfit that looks better than the first time she wore all of these pieces.

See, Kate, you can still look great, you have that potential, so just do this more.

Every knight is required to display a banner of his/her arms in the Chapel, together with a helmet, crest, and sword, and an enameled stallplate. These are taken down on the knight’s death, but the stallplates remain as a memorial, and these now form one of the finest collections of heraldry in the world.

The Order of the Garter is the highest order of chivalry in the United Kingdom, and one of the oldest orders of chivalry in Europe. The Order includes the Sovereign, several members of the royal family, and twenty-four knights (23 currently as there is one vacancy). Knights of the Garter are chosen personally by the Sovereign. There are also “Stranger Knights” which are foreign royals. The Royal Knights and Stranger Knights are not included in the list of 24 Knights.

Each June, the annual Garter Day procession takes place at Windsor Castle where the Queen and the Knights – in their velvet robes, insignia, and plumed hats – parade on foot from the Castle to the Chapel for the Garter service. This year, because of the rain, there was no procession and everyone traveled by car to the Chapel.

In the background of this photo of William and Kate, you can kind of see Prince Andrew and Princess Anne, who are both standing behind Kate.

You can kind of see Prince Edward in the background of this photo behind Camilla’s hat.

The Wives of Windsor are no longer coordinating, does that make you sad? It kind of makes me sad.

Camilla, Duchess of Cornwall wore a very familiar outfit: the champagne gold silk dress and champagne and green embroidered coat by Anna Valentine and a hat by Philip Treacy that she wore to William and Kate’s wedding in 2011.

I’m telling you, those red shoes really make this outfit for me. 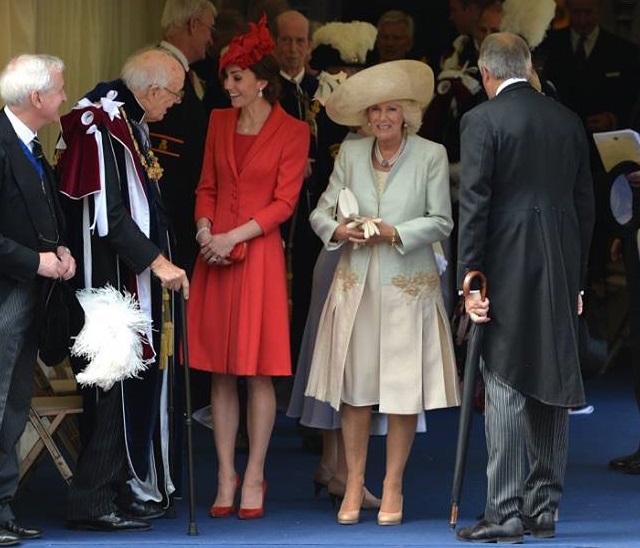 It must be really odd getting in and out of those cars in heels.