I’m a bit behind on posts now since I went out of town on Sunday (to Orlando – I’m fine; my friends are fine; what happened at Pulse is a terrible tragedy and my thoughts are with victims, and the families and friends affected by this hate-filled crime), so I’m playing catch up. This post is for The Patron’s Lunch which the British royals attended on Sunday, June 12; I’ll have a post on the Order of the Garter service later.

A nice dose of rain didn’t stop 10,000 people, with more than 600 charities represented, turning out to celebrate Queen Elizabeth‘s 90th birthday at a giant street party on The Mall yesterday. The Patron’s Lunch included lunch (of course), a parade, and the Queen riding in an open-top car.

HM wore a cerise Karl Ludwig couture coat and matching hat by Angela Kelly to stand out among the sea of people (she also wore Queen Victoria’s Bow Brooch), and gave a short speech saying:

“To everyone here today, and to those holding street parties elsewhere, I would like to say thank you for the wonderful support and encouragement that you continue to give me.

“I hope these happy celebrations will remind us of the many benefits that can flow when people come together for a common purpose, as families, friends, or neighbours. And I pay tribute to the commitment, selfless devotion and generosity-of-spirit shown by the hundreds of charities and voluntary organisations represented here today. You are an example to us all.

“I much appreciate the kindness of all your birthday wishes, and have been delighted and moved by the many cards and messages I have received. How I will feel if people are still singing “Happy Birthday” to me in December, remains to be seen!”

Here is a video of the Queen’s speech:

The Queen reflects on her 90th birthday celebrations and @thepatronslunch #Queenat90https://t.co/4XbsWPQGwB

“My family has had plenty of reason to celebrate since The Queen turned 90 in April: The Queen’s strong health and relentless energy; her sharp wit and famous sense of humour; and the fact that The Queen remains very much at the helm of our family, our nation and the Commonwealth.

“The Queen at 90 is the one Head of State that world leaders can turn to for a first-hand perspective of the arc of history over the last six decades. At 90, The Queen is the leader of our country, who we all look up to in good times and in challenging moments to set an example, and to guide the way ahead.

“From national military and sporting bodies, to small local associations, to charities that champion children, faith, education and arts, The Queen’s pride in her role as your Patron is absolute. Through The Queen’s association with you, she is not just shining a spotlight on the individual causes you care about; she is reminding us all that being active and engaged in society has virtue in its own right. Service to those around you is what unites you all.

“So on behalf of my entire family, can I say thank you. You have been partners in The Queen’s service for so many years. Before I finish, I hope you won’t mind if I say a personal thank you to The Queen – and to do so on behalf of all her grandchildren – and great-grandchildren. Granny, thank you for everything you have done for your family. We could not wish you a happier birthday.” 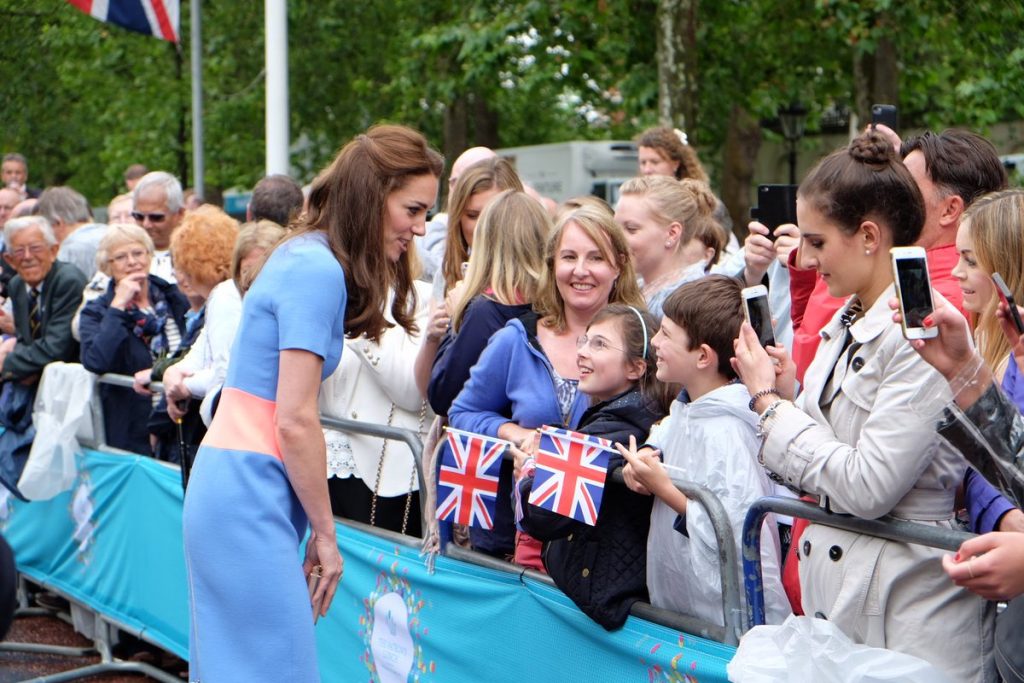 In the afternoon, the royals arrived and did a walkabout with the crowd.

William arrived just as the rain stopped, and told a member of the crowd: “We are magnets for the sunshine! We were looking out at the rain earlier and really felt for you guys. I hope you have been having a good day despite the weather.”

Kate Middleton was asked about how much Prince George had enjoyed Trooping the Color, and Kate said: “I’ve honestly never seen him so excited, he was absolutely thrilled and his little face lit up.”

Kate wore a new dress from Roksanda Ilincic – the “Blue Marwood Color-block Wool-crepe Dress” (was £980, currently £490) – with her Mappin and Webb “Empress” necklace and earrings. She wore her LK Bennett “Fern” pumps and carried her “Nina” clutch. Eh.

Prince Harry joked about the bright neon green outfit the Queen wore for Trooping the Color. Ann Gimson, from Bromley, Kent, said: “He said ‘Neon at 90, should we encourage more?’.”

Prince Andrew, Princess Beatrice, and Princess Eugenie arrived on foot to mingle with the crowd. Bea and Eugenie took many photos with the crowd. Eugenie wore a dress from Whistles, and Beatrice wore a skirt from Saloni.

It was Lady Louise Windsor‘s very first solo walkabout, though she was accompanied by a member of her parent’s staff. 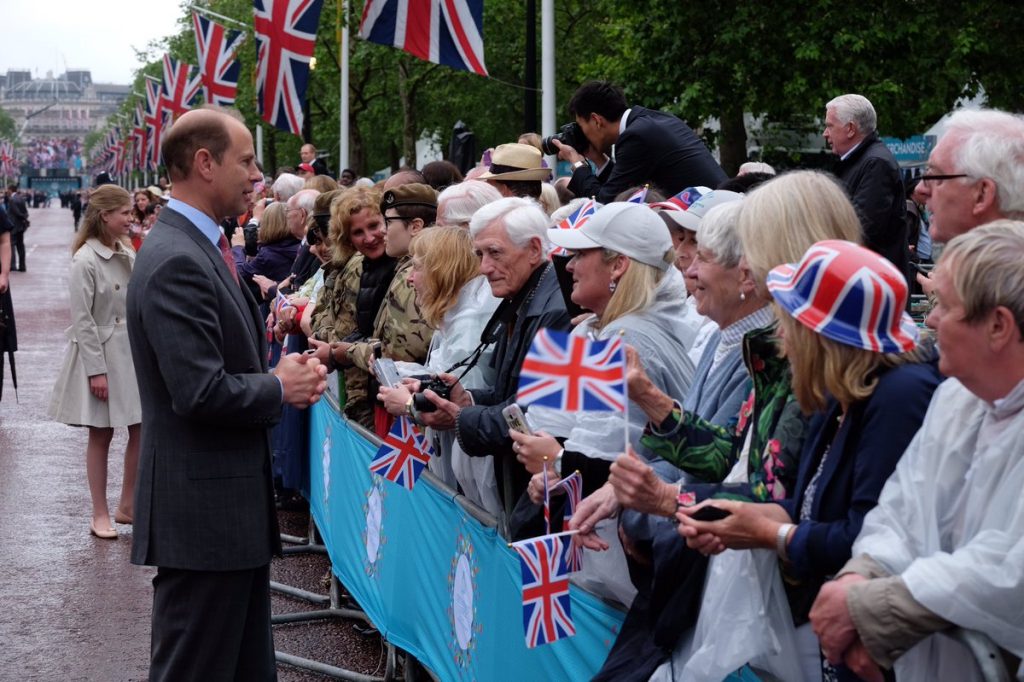 Prince Edward and Sophie, Countess of Wessex were nearby, and took photos with the crowd. 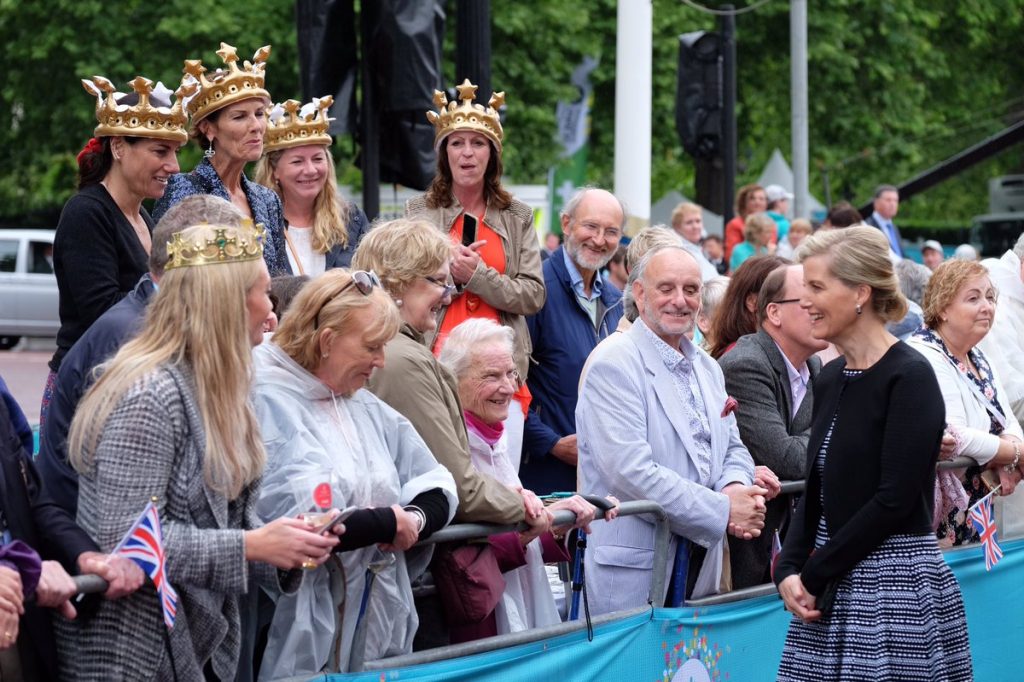 Prince Albert of Monaco was also in attendance (before heading back to Monaco for an event which I’ll cover later this week) and said: “I’m having a great time. It’s wonderful to be here to celebrate with friends from Monaco and from the UK. It’s very relaxed and the rain hasn’t hampered the spirits here at all.”

[All quotes from Mirror]

Andrew took a family photo at the end of the event. Kate really does stand out in her blue.

Prince Charles and Camilla, Duchess of Cornwall were not at The Patron’s Lunch on The Mall, they were in Gloucestershire for a street party which was put on by The Big Lunch, of which Camilla is Patron. 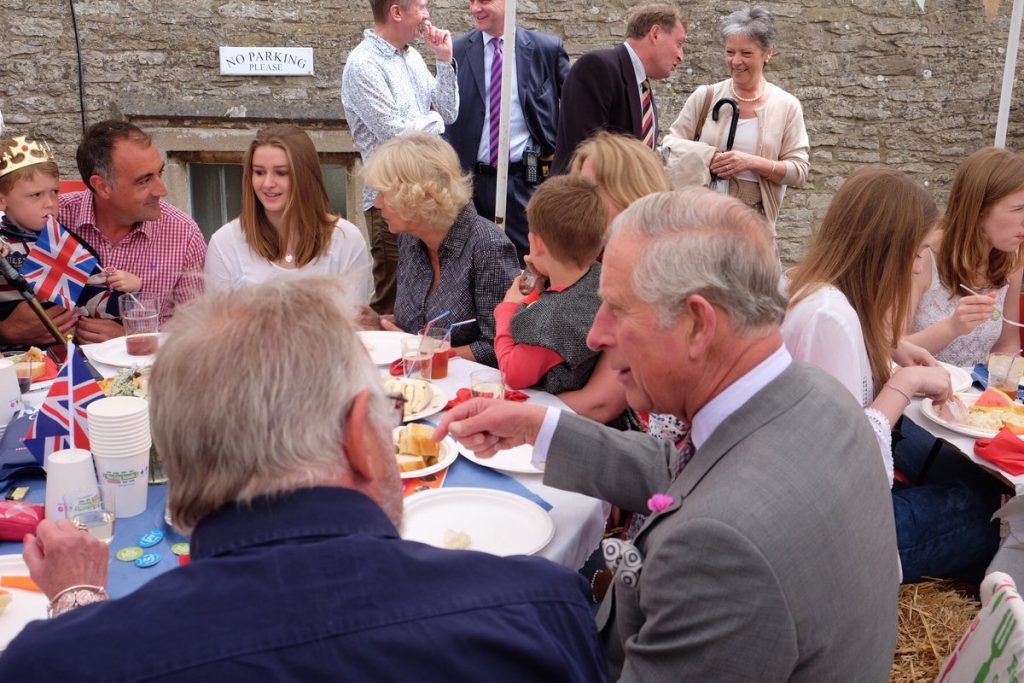 Charles and Camilla joined more than 100 residents from three local villages surrounding Brimpsfield to celebrate the Queen’s 90th birthday. There was apple bobbing, face painting, and a royal-themed costume competition for the children. 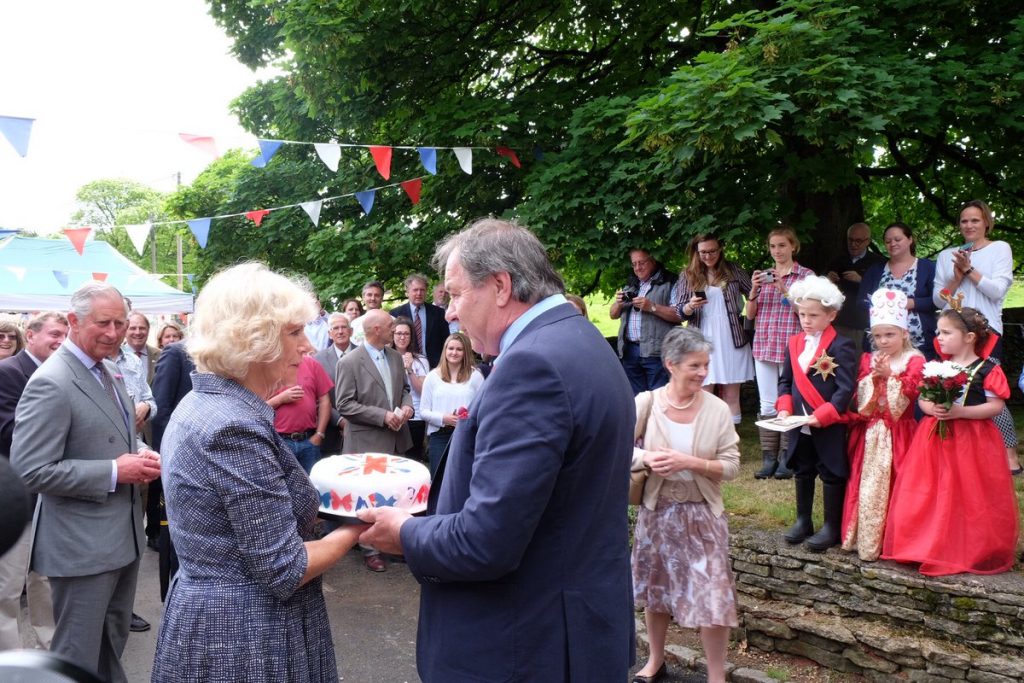 I’ll leave you with some more photos from the event.

William, Kate, and Harry got to ride in an open-top car on the way back as well.