Princess Charlotte made her balcony debut at this year’s Trooping the Color, while Prince George made his second balcony appearance in another set of Prince William‘s old clothes. 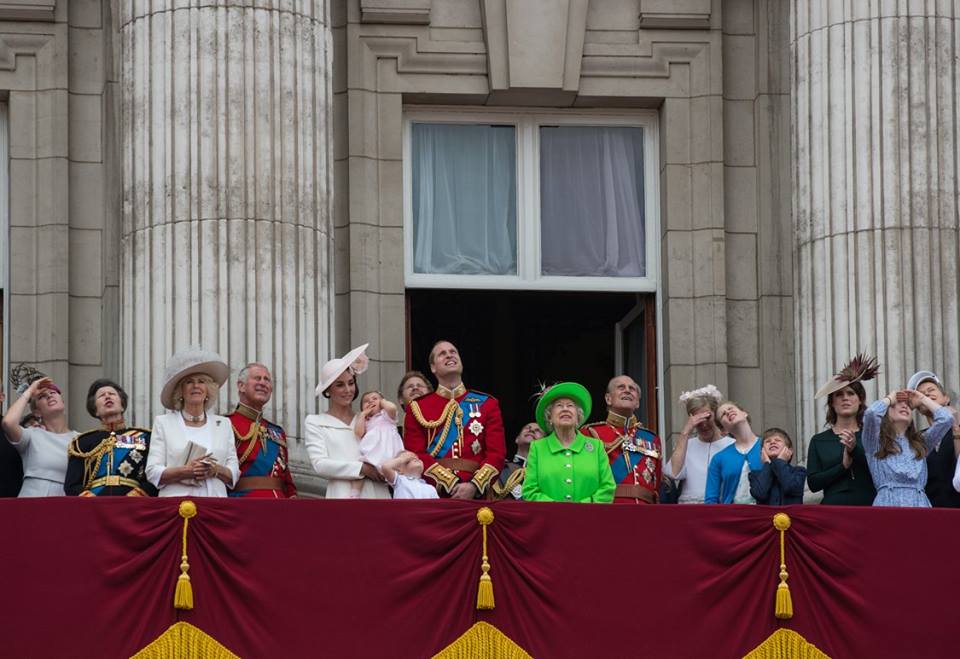 Princess Charlotte did not seem too thrilled to be on the balcony: it was bright, and loud, and she looks like she’s teething.

Charlotte stuck her fingers in her ears throughout the balcony appearance, and at one point Kate pulled her hand down. There were eight parts to a thirty aircraft-strong flypast, so yeah, lots of loud. 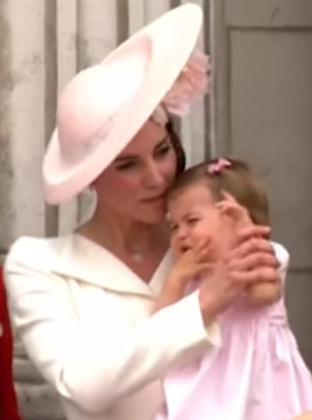 Charlotte looked cute in a little pink dress and bow, while George looked familiar in a blue and white outfit that William wore to Prince Harry’s Christening in December 1984 (instead of the modern copy he’s worn three times now).

George has got his little wave down. 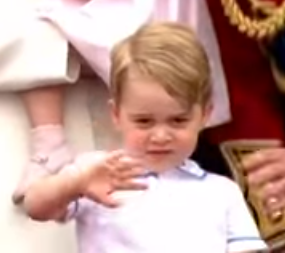 Charlotte threw her hand up at one point, too.

Anyway, let’s actually talk about the Queen now, shall we. 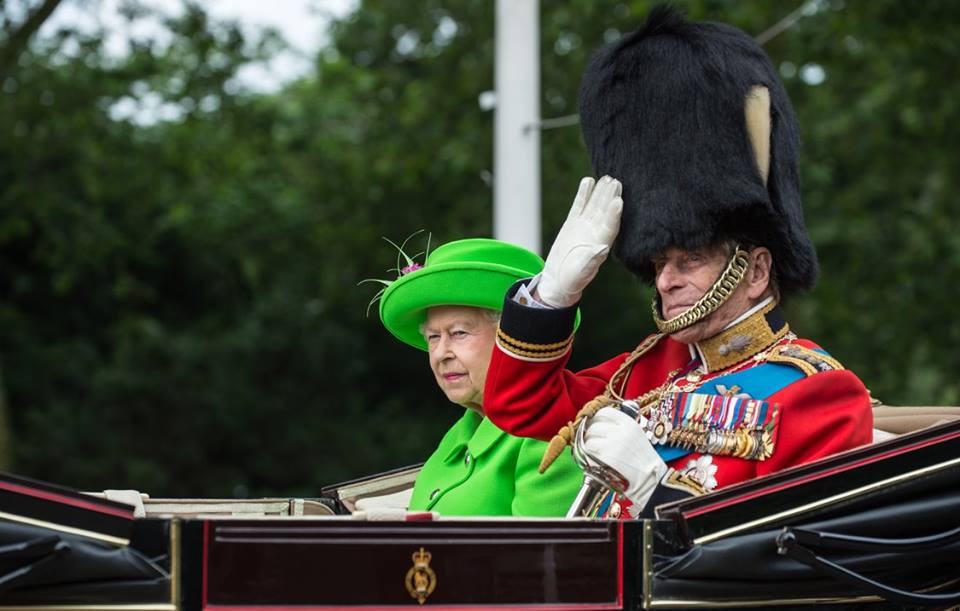 Almost fifteen hundred soldiers from the Household Division were on parade at Horse Guards Parade to mark the Queen Elizabeth‘s official 90th birthday. This year, the Color being trooped was that of Number 7 Company Coldstream Guards. The Coldstream Guards were formed in 1660 by General Monck from the republican New Model Army and marched to London to restore the monarchy and put King Charles II on the throne. Their service to the Crown has been unbroken since then. 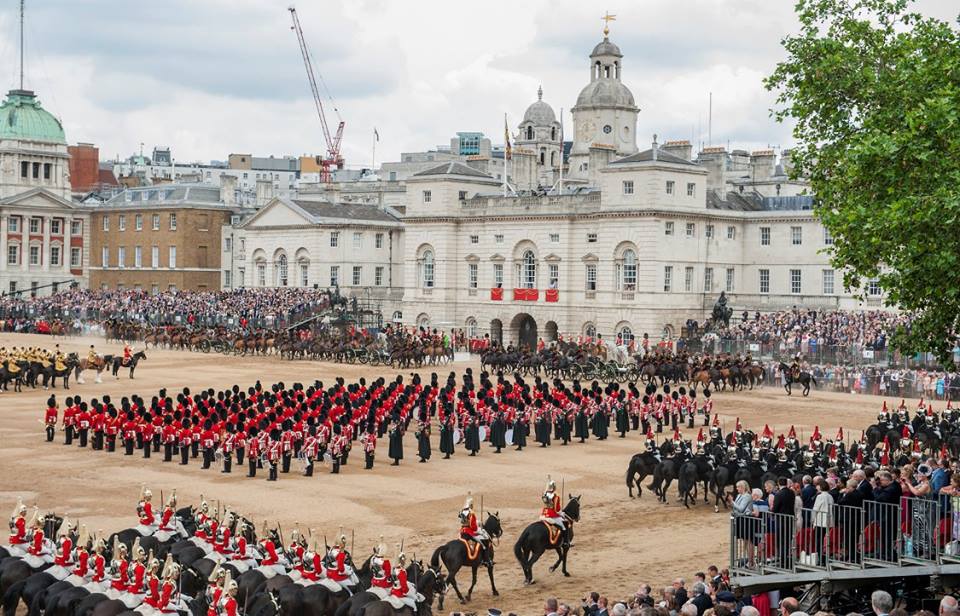 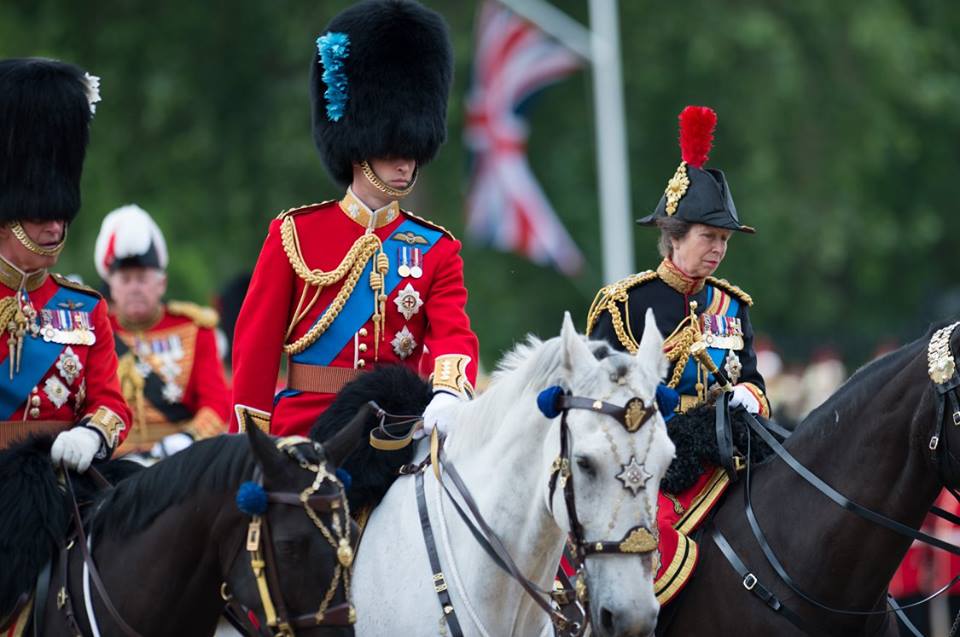 Royals participating in the carriage procession to and from Horse Guards Parade include: Camilla, Duchess of Cornwall and Kate Middleton, Duchess of Cambridge… 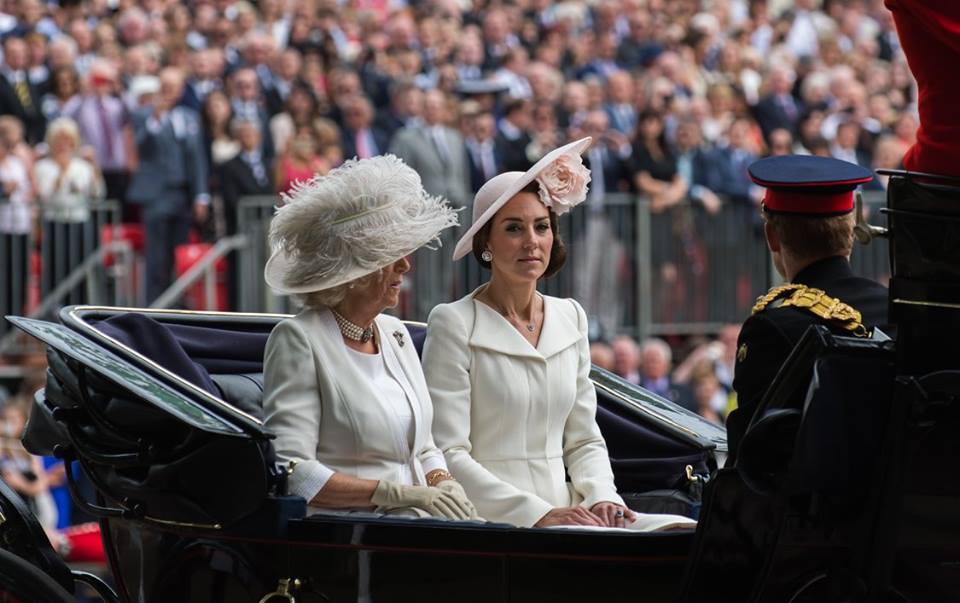 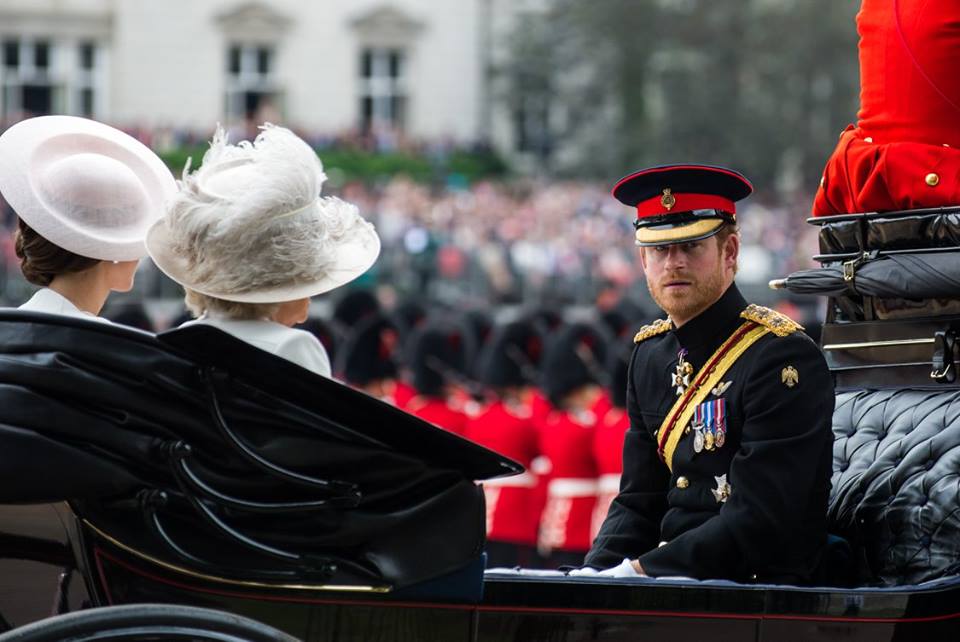 After the Trooping at Horse Guards Parade, the royals went back to Buckingham Palace for a flypast. The flypast included thirty aircraft in eight parts, from the Spitfire and the Hurricane, made famous in the Battle of Britain, to modern multi-role Typhoon fighter jets, transporter Voyager, and the Red Arrows. 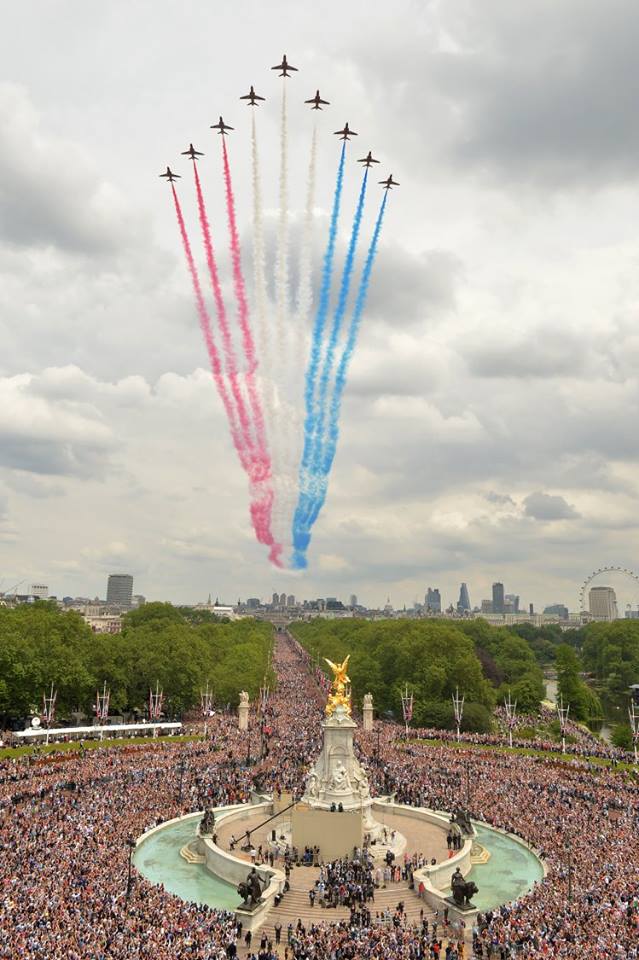 The Queen wore a neon green coat and dress by Stewart Parvin and hat by Rachel Trevor Morgan – cuz a queen’s got to stand out, yo. HM wore the Brigade of Guards Badge – which combines the symbols of the Grenadier Guards, the Coldstream Guards, the Welsh Guards, the Irish Guards, and the Scots Guards – like always.

I’m surprised Prince Philip doesn’t topple over from the weight of all those medals.

The Merry Wives of Windsor color coordinated again, this time in white.

Camilla wore a white Anna Valentine dress and coat and Philip Treacy feathered hat. She wore her pearl choker with the larger diamond clasp, and she wore her pearl and diamond Prince of Wales feathers brooch.

Kate repeated her white Alexander McQueen coat she wore to Princess Charlotte’s Christening and paired it with a pink Philip Treacy hat – the OC 147. She wore her Mappin and Webb “Empress” necklace and new giant pearl and diamond earrings. Kate carried her new oatmeal Mulberry Bayswater Clutch which she debuted in India.

I’m meh on the coat repeat, the hat is cute from certain angles and I like the flower, but I love Kate’s updo.

Sophie wore a new white Emilio Pucci Embellished stretch-wool jacket and a new flower hat-let from Jane Taylor. I think the hat looks too twee for a 51 year old woman, but I like the rest of her outfit.

Louise wore a floral dress and blue sweater, with a heart-shaped necklace and a hair piece that features acorns and oak leaves.

I want to take a second to highlight Princess Eugenie because she’s killing it this weekend in the fashion department. This green looks phenomenal, and I love the color combination with the hat.

I think Beatrice also looks lovely – even though her hat looks like an orange peel.

And an extra photo of Harry.

Here’s a video of the entire event.

I’ll leave you with more photos of the Cambridge kids.