In 2010, Prince William became President of the British Academy of Film and Television Arts (BAFTA). That year, he attended the British Academy Film Awards and presented Vanessa Redgrave with a British Academy Fellowship. Since then, he has attended the BAFTA Awards only one other time – in 2014 when he presented the Fellowship to Helen Mirren – though he has done a handful of other BAFTA-related events over the years. This trip down memory lane is all to set up the fact that The Sun is reporting that William will skip this year’s BAFTA Awards this Sunday as well as a pre-BAFTA event at Kensington Palace on Saturday (just like he did last year).

“Film industry figures have been left fuming because I’ve learned Bafta president PRINCE WILLIAM has decided to snub the glitzy ceremony for a second consecutive year. The decision has seen many senior movie insiders question whether the young royal’s commitment to the film industry is as strong as it is to sport, especially football.

“Since becoming Bafta president in 2010, William has attended the awards just once, while his wife Kate has never attended. By contrast, he has attended the last two FA Cup finals in his role as president of the Football Association.

“A movie source said: ‘The Bafta film awards are such a major international event, it’s obviously very disappointing that Prince William has only attended once since becoming president. Everyone understands that he loves football but spending a night with some of Britain’s biggest stars and Hollywood A-listers isn’t really hard work.’

“Like last year, the pre-nominee Bafta party will be held at Kensington Palace on Saturday, which the royal couple are also expected to skip. […]

“The film insider added: ‘It’s been such an amazing year for British movies, especially for Eddie [Redmayne] who went to school with William.’

“Instead, Wills is expected to stay at his Norfolk home before returning to London on Monday night for his first public engagement of the year.

“A royal source said: ‘William has a visit to the Foreign Office pencilled in for Tuesday morning so it’s strange he doesn’t just travel up to London at the weekend before the do on Sunday. His Foreign Office visit is his first engagement of the year, so he can’t claim to be too busy. It’s likely that he doesn’t attend the Baftas every year as he doesn’t want to set an expectation he will always attend.’

“Hanging out with A-listers like Cate and Leo is hardly the world’s toughest gig.”

The Sun and their “source” are factually incorrect. William has attended the BAFTAs twice: in 2010 and in 2014. Photographic evidence:

I bring up this article for two reasons:

1) There is no reason for William not to attend the BAFTA Awards every year. It’s one night, it’s super easy, and it’s a way to pad his engagement numbers with minimal effort. I mean, come on.

2) William is getting an increasing amount of bad press. I made a comment yesterday that William and Kate are “like a train wreck we’re watching in slow motion.” And by that I mean it’s fascinating to watch the evolution of William and Kate and their relationship with the press in real time.

When I started this blog, in June 2013, it was right before George was born, and the sycophancy was out of control. But two and a half years, and several threats, later and the press are way more willing to make William and Kate look bad. It’s quite interesting, the slow demise of William and Kate’s goodwill and positive public image. It really is like watching a train wreck in slow motion. I’m fascinated to see where this is going to end up.

William and Kate attending the ‘BAFTA Brits to Watch’ event in LA on July 9, 2011

In other William news: William attended the funeral of Henry Worsley – the man who died during a solo trek across Antarctica. William was seen hugging Worsley’s wife, Joanna.

William is patron of the Shackleton Solo Expedition which sponsored Worsley’s trek, so it’s fitting that William would attend Worsley’s funeral. 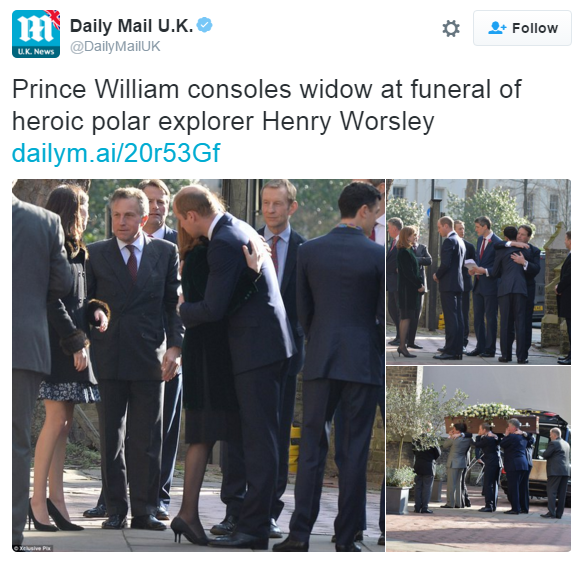 While The Sun is busy throwing William under the bus for skipping the BAFTAs, The Mirror wants you to know that William is still piloting helicopters.

An unknown time ago, William piloted an air ambulance to help a three-year-old boy named Luke who was choking on peanuts. The article does not say when this rescue took place, but it’s an interesting coincidence that this story came out not long after the one about William skipping the BAFTAs.

William giving a speech as he launches the BAFTA ‘Give Something Back’ Campaign on November 18, 2013