Camilla, Duchess of Cornwall in diamonds and lace at the British Asian Trust Gala

All diamonds all the time today with two jewelry-focused articles – go here to read about the Swedes at the Official Dinner. Camilla, Duchess of Cornwall sparkled in diamonds as she joined her husband, Prince Charles, at the British Asian Trust Gala on February 2.

I’m starting with the diamonds, because diamonds. Camilla wore these gorgeous pear-shaped diamond cluster drop earrings with 11 diamonds each, and a matching diamond necklace featuring pear-shaped and oval diamonds. Camilla first wore this set in 2005; it is believed to be a gift from Prince Charles made from a dismantled tiara.

Camilla wore a midnight blue lace Bruce Oldfield gown with a lighter blue underlay on the bodice. She wore a black shawl over the top of the dress.

The British Asian Trust’s third annual gala was held at the Natural History Museum and featured 450 dinner guests, including celebrities from film, TV, music, and sport as well as some of the leading names in British and international business and enterprise. 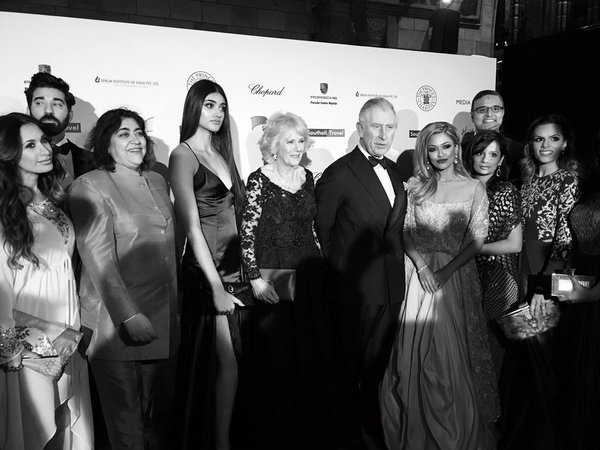 The gala was to support and raise awareness of The British Asian Trust. The British Asian Trust was founded in 2007 by Charles and aims to unlock the potential of disadvantaged people in South Asia by empowering them to transform their own lives through grassroots initiatives that help people to help themselves. The Trust works to support education and training to make environments safer, gives survivors of abuse opportunities to increase their confidence, skills and life prospects, works to improve financial security through skills training that leads to employment, and works to tackle the stigma in South Asia surrounding disability and mental health issues, providing community-based healthcare support.

Charles gave a speech in which he referred to Camilla as “My darling Mehabooba” which means “my darling beloved”. Aw, so sweet.

“In the past year, my Trust has continued its efforts in four key areas – education, livelihoods, mental health, and anti-trafficking. These issues can throw up things that are uncomfortable and sometimes even taboo, so I am particularly proud that my Trust does not shy away from them and contributes, in its own way, to resolving some of the most difficult issues of our time. […]

“Now another area of work that I was particularly excited to see get underway in recent months, is my Trust taking a more in-depth look at the issues faced by rural farmers in India, with the aim of establishing a dedicated fund to implement the kinds of intervention that the research clearly points out are needed. Agriculture is, of course, a vitally important sector of the economy, and one, if I’m not mistaken, that over half of rural households in India rely on as their principal means of livelihood. Over 30% of the world’s smallholder farmers are based in South Asia, and of those well over a third are women. However, as I am sure you know far better than I, smallholder farmers often realize only a small proportion of the value of their products and they can get caught in a poverty trap with no obvious way out. So you can immediately see that by making real in-roads into helping the sector upscale and increase its productivity – in a sustainable way, of course! – we can make a truly staggering difference to so many lives.

“Outside of specific programme areas I’ve mentioned… my Trust remains hugely ambitious about growing its impact. It is seeking to increase the scale of the work on the ground in order to support more of those in need, as well as growing its footprint so it can reach Bangladesh and Nepal in a more dedicated way.”

Leona Lewis performed at the gala, and Simon Cowell was a guest – though he arrived over an hour and a half late and didn’t wear a jacket or tie (his chest is seriously grossing me out).

One day I want to be rich enough that I can buy myself some diamonds like this.

64 thoughts on “Camilla, Duchess of Cornwall in diamonds and lace at the British Asian Trust Gala”