I keep hoping there will be news about Kate, William, or Harry scheduling appearances for January, but nothing has been released so far. Seeing as KP usually releases appearance info two weeks before the appearance, and there is just over two weeks left in January, it’s looking doubtful that any of them will make any appearances this month. In the meantime, we’ll keep ourselves busy with other royal news and events. For today, here’s an interview with the Queen‘s oldest grandchild, Peter Phillips, about the street party in celebration of HM’s 90th birthday. Also, Prince Harry was spotted out partying.

**KP released info about Kate; update at end of post**

The British Royal Family, minus Philip, at a Service of Thanksgiving for the Queen’s Diamond Jubilee in June 2012

A 10,000 person street party known as The Patron’s Lunch is being organized to end a weekend celebrating The Queen’s 90th birthday. HM turns 90 years old on April 21, but the celebrations are being held until her official birthday in June. There will be a National Service of Thanksgiving at St. Paul’s Cathedral on Friday, June 10; Trooping the Color will be held on Saturday, June 11; and The Patron’s Lunch will take place on Sunday, June 12.

The Patron’s Lunch is a celebration of the Queen’s more than 600 patronages, with 9,000 guests from the various patronages and 1,000 members of the public attending the event. There will be live “carnival style” entertainment with a colorful procession of entertainers representing the Queen’s patronages travelling the length of The Mall and around the Royal Parks.

The Queen and Prince Philip will watch part of the event from the royal box beside the Queen Victoria Memorial outside the palace, with other members of the Royal Family also expected to attend – including Prince William and Prince Harry, who are joint presidents of the event. 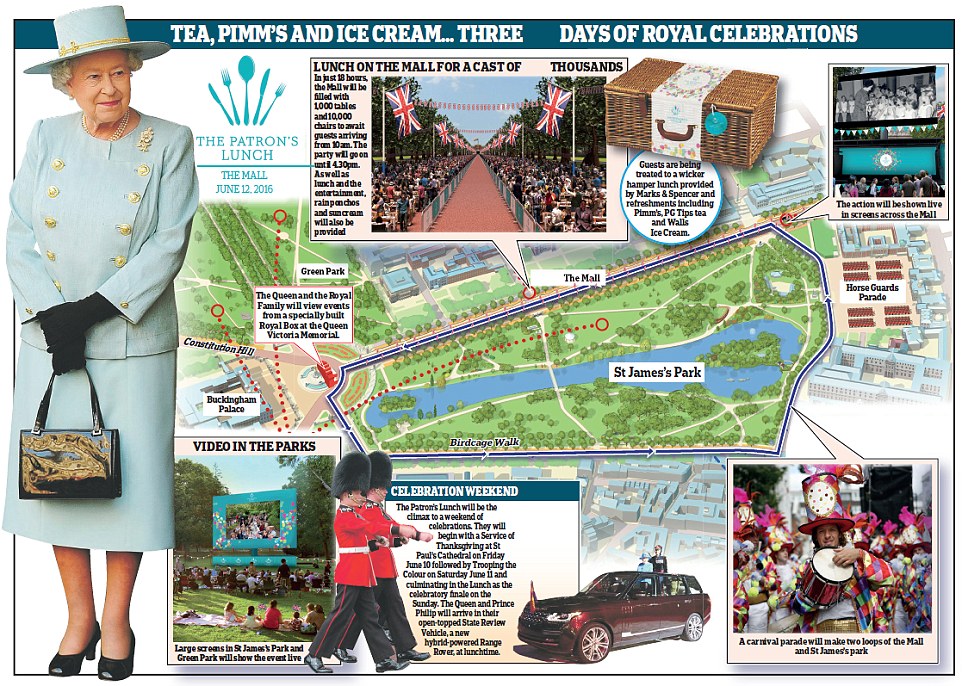 Though the event is not-for-profit, the guests are being charged £150 per person to attend.

“But questions were being asked about why organisations supported by the monarch should be asked to meet the cost of attending an official royal celebration of their role out of their own funds. There are also fears the event could turn into a corporate jamboree after it was revealed that those taking part are also being allowed to auction off 40 per cent of their ticket allocation in order to cover the cost of their own staff attending. That means a significant proportion of attendees may have simply ‘bought’ their way in and not have any affiliation with the charities the event is designed to promote.”

A spokesman for the Patron’s Lunch explained: “Organising an event of this magnitude in this location requires significant investment. The Patron’s Lunch is a not-for-profit event, and whilst we have the generous support from our partners, it does not cover the full cost. This is a truly unique event – it is a once-in-a-lifetime, never-done-before celebration. This ticket is a very special one that gives people the chance to be part of this huge street party to honour the lifetime of service of the Queen.”

Princess Anne’s 38-year-old son, Peter Phillips, is being paid to organize the event through the London office of Australian firm Sports and Entertainment Limited. Peter said words about the event and how it came together:

“SEL is being paid a set fee basically to take this from sign-off from the Palace through to delivery of the event. I was very conscious to make sure we did this properly, so we went through the normal channels of approaching the Palace. We had to show that this wasn’t a case of trying to cut corners because the Queen happens to be my grandmother.

“We went through the normal channels. We presented an idea to [Buckingham Palace] – they really liked that idea. That took a few months to get through the various sign-off processes that you have to go through for these events. Then we got the sign-off in December 2014. It was after we had approached the office that I spoke to [The Queen] about it. The idea started as a conversation… and how we should really do something to celebrate the Queen’s patronages. For me what the family does as a whole for a lot of these organisations is not entirely appreciated by the wider public.”

On his conversation with the Queen about him organizing the event: “I said, ‘Oh, by the way you may or may not have heard that we are having conversations with your office about this’ … She said ‘I’ve heard you’re up to something”.”

On what the Queen thinks about the event: “She is really excited by this – she thinks it is a great idea. She loves the fact that all of these organisations are going to be brought together for the first time.”

“But Joe Little from Majesty Magazine yesterday said he expected the pricing to attract ‘a lot of flak’. He said the tickets were priced ‘at a level that would exclude an awful lot of people’.

“He added: ‘There are other things that you pay £150 for a ticket and you can say this money is going to charities but in this instance you can’t actually see who is going to benefit from your money so that’s not helpful. It’s true charities are benefiting if they can sell 40% of their tickets. But I do feel they have left themselves open to criticism with the way it’s not 100% transparent. This is going to come under scrutiny because it’s being organised by the Queen’s grandson.'”

Whether Peter Phillips was involved or not, whichever organization was hired to organize this event would have gotten paid for their services. Because of the family connection and because Peter sold the rights to his wedding to Hello Magazine for a reported £500,000, I understand why people are trying to make Peter getting paid to organize this event into a thing, but it’s really not that big of a deal.

The charging the patronages to attend the event is a bigger deal to me. I think it’s rather rude to ask the charities to take funds away from the people they help just to send some of their staff to a giant street party for the Queen’s 90th birthday. It’s not like the charities are going to make back that money through extra donations they would get from the exposure since the charities aren’t really being highlighted.

But at the same time, if the organizations leave it up to the staff to decide whether they want to go and have them pay for it, then I think that’s an acceptable compromise. As David Anderson, the chief officer of the Cleveland Bay Horse Society, put it: “I think at the end of the day it’s what you want to spend your money on isn’t it?”

The Queen during the Thames Diamond Jubilee Pageant in June 2012

Oh, by the way, Prince Harry went out partying on Wednesday night. Harry was seen leaving Bunga Bunga club, having partied with two of his reported exes – Natalie Pinkham and Astrid Harbord – as well as Princess Eugenie, Holly Branson, and James Middleton. The party was a birthday party for socialite Anneke Gilkes.

Guess who is credited with the pics: Jesal/Tanna (ie. Niraj Tanna and Jesal Parshotam). Because of course.

Harry looks pretty bleary-eyed and squinty in the photos, but that could be because a giant camera flash was going off in his face. 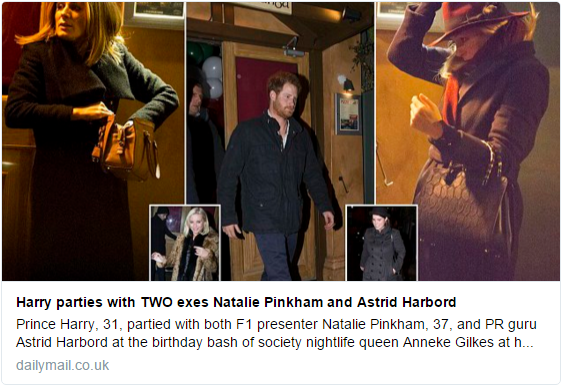 Kensington Palace announced today that Kate Middleton will guest-edit The Huffington Post UK for a day in mid-February and “will highlight the importance of children’s mental health and the inspiring work being undertaken in this field around the country.” “The Duchess will be commissioning contributions from a number of leading figures in the mental health sector.”

“Guest-editing” the HuffPo UK and focusing on children’s mental health is fine, but I really hope they announce some actual appearances soon. 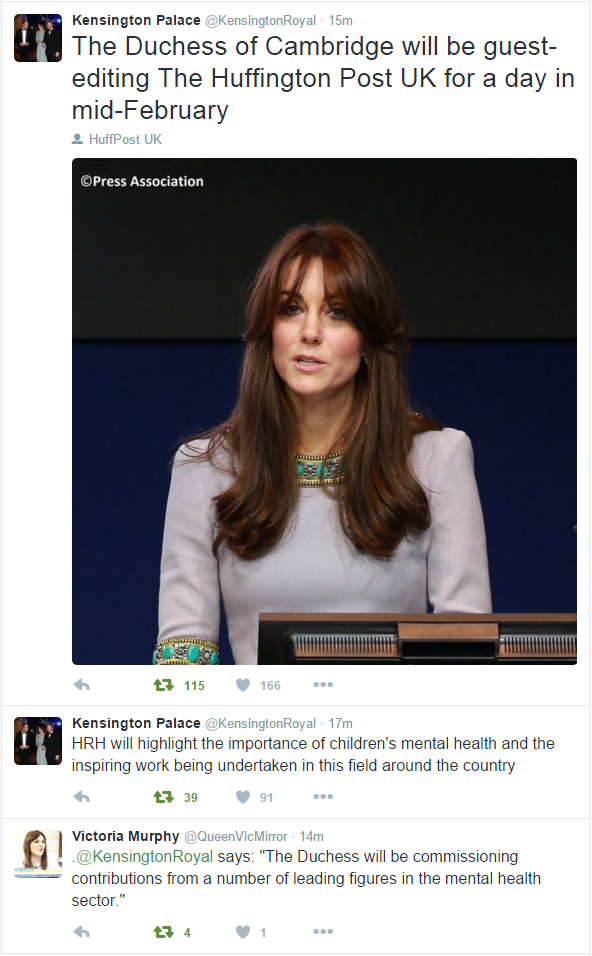 Our old pal Richard Palmer brought up a good point: “The Duchess of Cambridge is to guest edit a news website next month that runs the sort of pap pics of celebrities and kids she doesn’t like.”