I love tiaras, I really do. And I love it when people break out of their tiara ruts and wear something new (while I think the Lover’s Knot should have stayed in the vault a while longer it was still interesting to see it again). Yesterday, December 10, the Swedish Royal Family – King Carl XVI Gustaf, Queen Silvia, Crown Princess Victoria, Prince Daniel, Prince Carl Philip, Princess Sofia, Princess Madeleine, and Chris O’Neill – got all dolled up in tiaras for the Nobel Prize Awards Ceremony and banquet at Stockholm Concert Hall in Stockholm.

Queen Silvia isn’t ever a surprise and isn’t ever my favorite, but she always looks nice, as she did last night in her rust-red gown with Queen Sophia’s Nine Prong Tiara and her Order of the Seraphim sash and star (Sweden) and portrait of the King.

Crown Princess Victoria looked amazing. This custom aubergine silk chiffon gown and cape from By Malina is easily one of my top 5 favorite gowns from her. She paired the gown with the Connaught Tiara (which isn’t wholly new to her since she wore it for Prince Carl Philip’s wedding but it is still a change from her usually go-tos) and the necklace, earrings, and two brooches (one securing her sash, the other in her hair) from the Amethyst Parure. She also wore two diamond bracelets and the Order of the Seraphim sash and star (Sweden) and portrait of the King. I love this – she looks really fantastic here but she didn’t win the night for me fashion-wise.

The tiara was originally owned by Princess Margaret of Connaught, wife of King Gustaf VI Adolf, and previously worn by Carl Gustaf’s mother, Princess Sibylla, but is now the property of Princess Margaretha (Carl Gustaf’s sister). Maddie borrowed it for the evening, as well as diamond floral earrings and a ring previously owned by Princess Lilian (Carl Gustaf’s aunt who passed away in 2013). Maddie also wore the Order of the Seraphim sash and star (Sweden) and portrait of the King.

I think Maddie looks stunning and it’s really fun seeing this tiara on her. She looks like a princess and wins the night for me.

Also, Maddie posted a message on her Facebook page: “Congratulations to all of this year’s Nobel Prize winners! We are all inspired by your accomplishments for the world!”

Princess Sofia wore a black Oscar de la Renta gown and her Diamond and Emerald Wedding Tiara. She also wore diamond and emerald earrings and a brooch, along with her Order of the Seraphim sash and star (Sweden) and portrait of the King.

Sofia looked okay – way better than last year’s tulle and sequin creation. But I’m still not a fan of this tiara; it just doesn’t seem to sit right on Sofia’s head. Also, she looked, I don’t know, nervous (?) last night. Her expressions were odd. 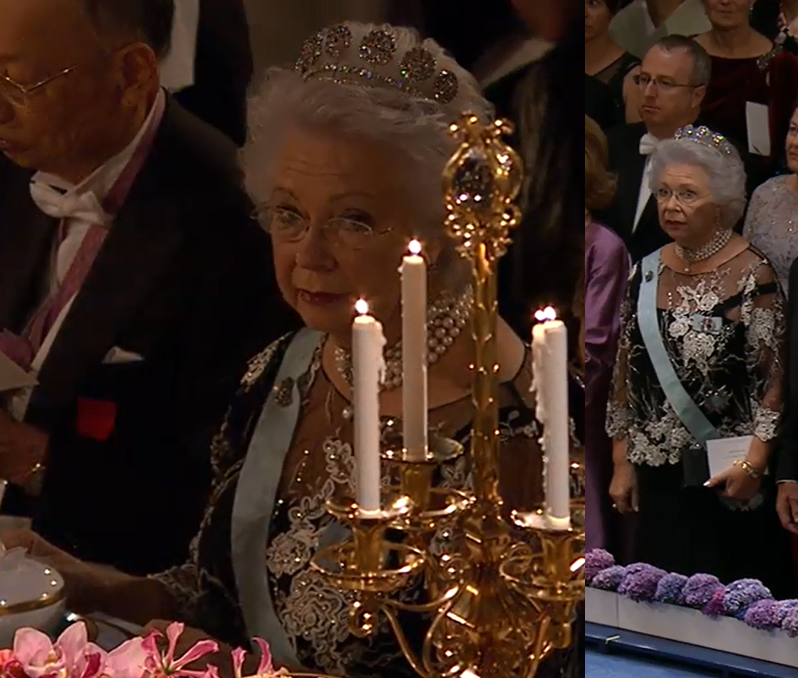 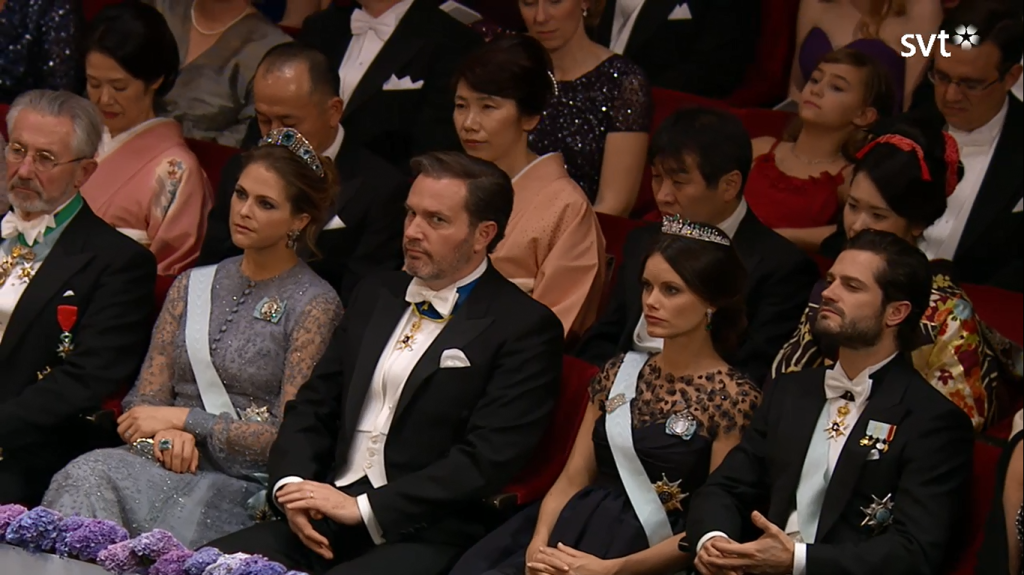 The food looked very tasty with a menu of:

Turbot and scallop with plants from the sea, browned butter, and caviar. Glow baked veal wrapped in mushrooms, celeriac, and apple, and roasted celery juice, served with potato pithivier (a puff pastry pie). Cherry Flower with the taste of coffee and almonds. 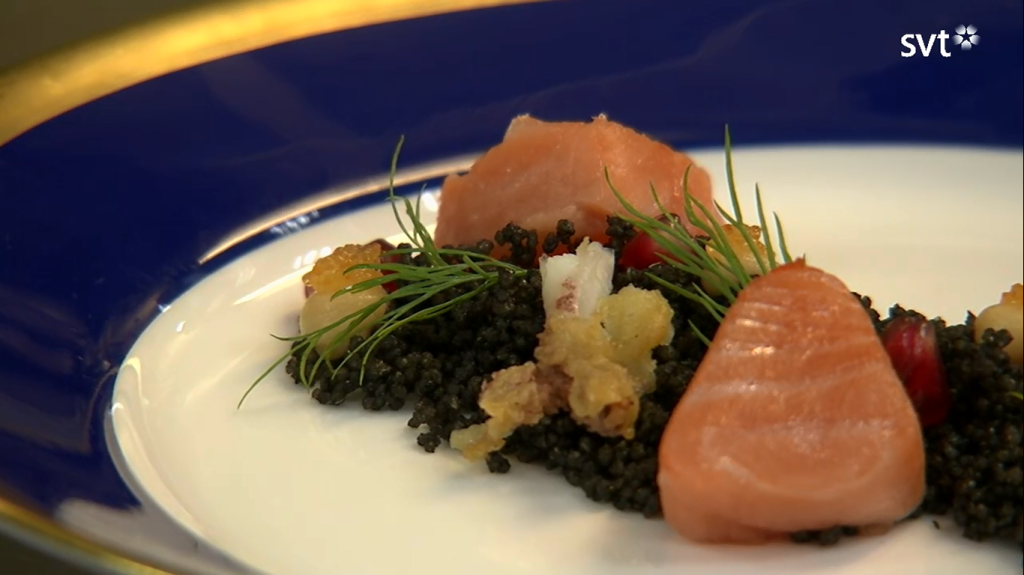 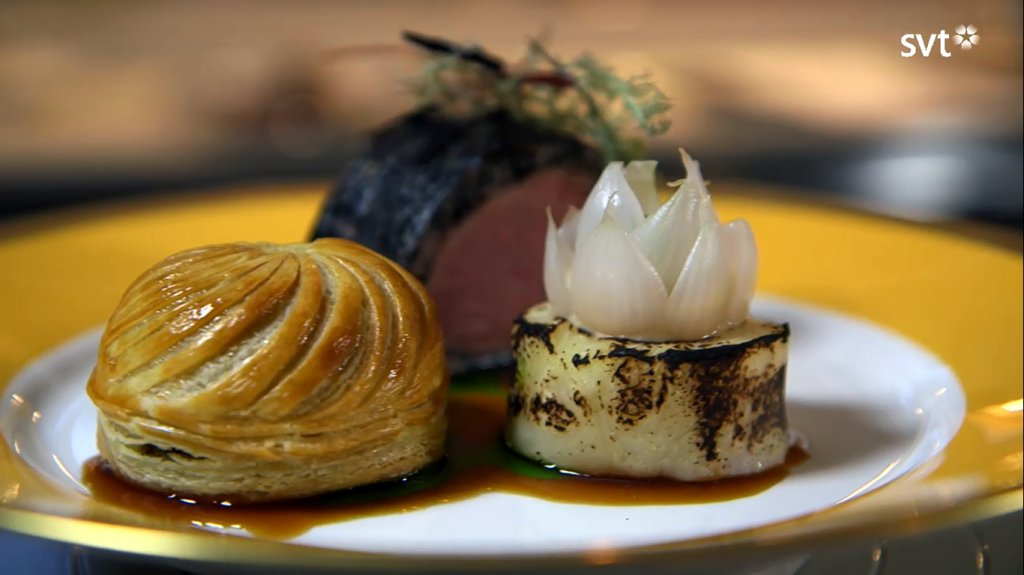 During the banquet, a choir sung while lights were projected on the wall.

You can watch a replay of the awards ceremony here, and of the banquet here. 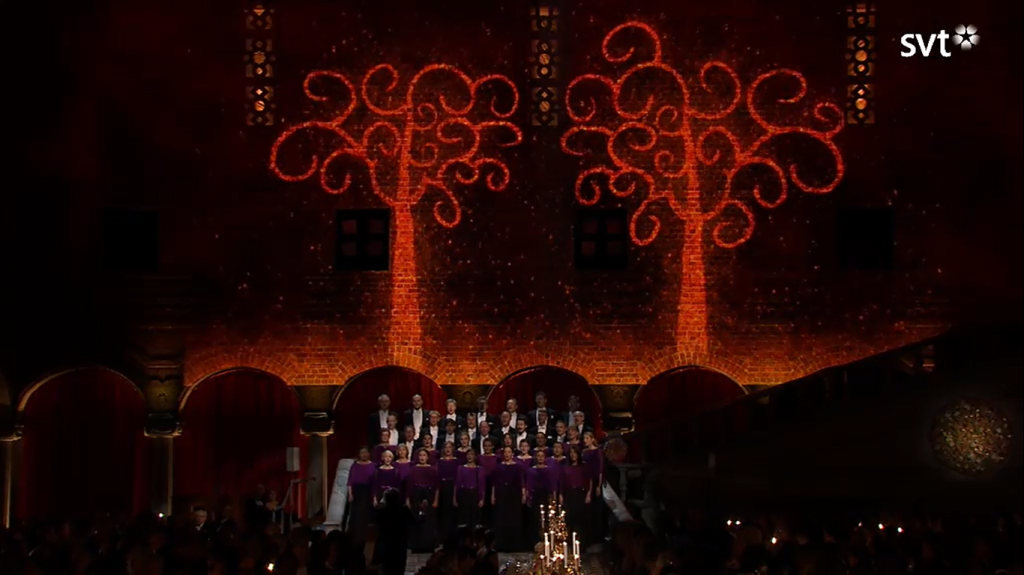