I hope everyone had a great Christmas or normal Friday. I ate Chinese food – because nothing else was open – and it was delicious. Before the British royal family tucked into what I would assume was also a delicious meal, they made their annual walk to St. Mary Magdalene Church on the Sandringham estate. Prince William and Kate Middleton, Duchess of Cambridge, joined the Queen, Prince Charles, and the rest of the family. Unlike the last two years, Kate and William did not hold hands.

I don’t have much to write about in this article other than what people wore and “Hey look, this person”, but I do want to bring up the media coverage of the walk this year.

I’ve thought for the last two years that it must suck for the royal reporters and photographers – especially the ones who have families – to have to go to Sandringham and work on Christmas. Well this year I guess most of them decided the royals weren’t worth it because my Twitter feed was pretty silent Christmas morning. It seems like most of the regular photographers were not there – Chris Jackson was there (of course), as were some others, but Mark Cuthbert, Tim Rooke, James Whatling, and Mark Stewart were all missing (basically the ones who have been upset with Kate as of late). There were a few royal reporters there but the regular ones from the Daily Mail and Express were missing (they may have sent junior reporters to cover it for them, though). I know the cell reception is not so great at Sandringham, but it’s always odd to me when my Twitter feed is doesn’t blow up when Kate is out in public (and that near silence has happened several times this fall).

I don’t know if I’m reading too much into this (why wouldn’t they want to be home with their families?), but it is odd to me (especially considering the coverage from the last two years) and there is nothing else to talk about so I thought I’d bring it up. What do you guys think: pointed message or simply choosing family time over work?

Kate added a new green coat to her collection (this is her sixth or seventh): the Sportmax green long belted coat ($1,895). The coat comes with a belt, but Kate couldn’t leave well enough alone and decided to add one of her own, which I don’t like (but at least it’s not that horrible McQueen one). Underneath, Kate wore a Great Plains Cezanne floral dress which she has in another color and wore in 2013. 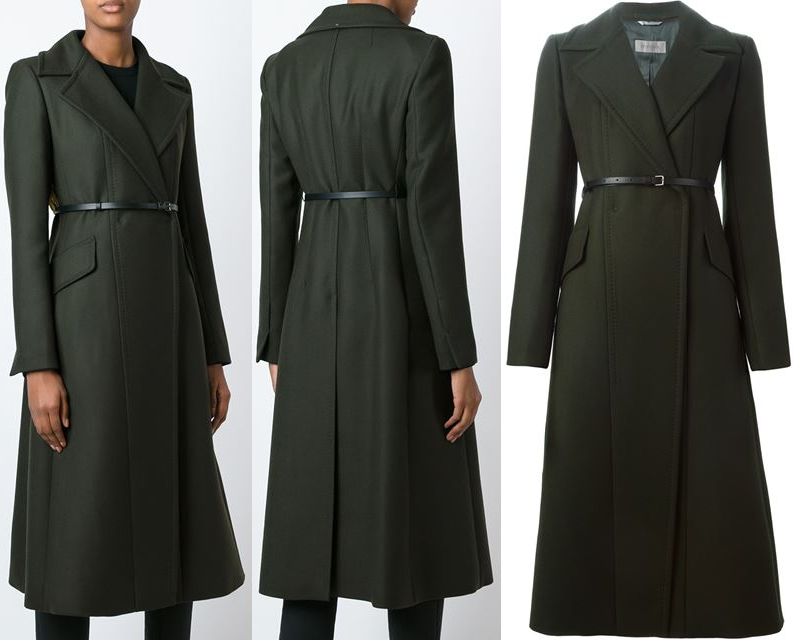 Kate added to her hat collection with a new hat which the Daily Mail claims is by Lock and Company. I don’t mind the flower (which looks like a poinsettia to me) but Kate really needs to stop with the flying saucer hats (she’s worn several this year). Kate wore her trusty Kiki McDonough Green Amethyst Oval Drop Earrings, her Aquatalia Rhumba boots, and carried her favorite Mulberry Bayswater clutch.

Kate decided to surprise us by repeating a brooch we only got a tiny glimpse of in 2012 during a Diamond Jubilee lunch at Buckingham Palace: an Oak Leaf and Acorn Brooch.

Is it bad that I don’t hate this outfit? It’s very Kate, very reminiscent of outfits she’s worn before, but I like the addition of the brooch and I’m glad she chose a more festive color than last year’s brown. 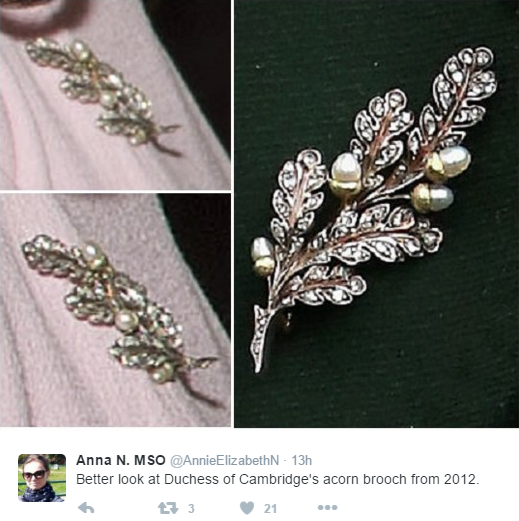 [Special thanks to Anna]

Camilla, Duchess of Cornwall wore a grey coat she’s had for a while, but made it interesting with the addition of her Diamond Moth Brooch.

Princess Beatrice and Princess Eugenie. I hate both their shoes, but I love the color of Eugenie’s coat.

Sophie, Countess of Wessex wore a dress coat from Suzannah and a hat by Jane Taylor. It is weird that I think Sophie looks like a snow bunny? The outfit is grey, with fur, and the hat looks a bit like bunny ears from the angle this photo was taken.

Sophie walked with her kids: Lady Louise Windsor and James, Viscount Severn. This is the first time James has attended Christmas church service. Louise made her first appearance in 2011 when she was eight, and James turned eight earlier this month.

If we are judging by the Wessex kids, I would expect to see Prince George make his first appearance at Christmas church service in 2021, and Princess Charlotte to make her first appearance in 2023.

Prince Harry and his Ginger Beard with a basket of flowers.

Prince Philip and Princess Anne. I like the color of Anne’s outfit, though it seems too cheery on her. Anne is not cheery.

There was a morning church service which most of the family attended, including Harry, but Kate and William skipped. And it looks like the Middletons did not attend the Christmas church service like they did last year.

Here is a link to the Daily Mail which has a lot more pictures, and below is a video.

The Queen’s annual Christmas message aired Christmas Day and all I can say is vocal inflection is so important, especially when making what are supposed to be lighthearted or humorous comments.

The Queen talked about Christmas trees, her upcoming birthday celebrations in 2016, and the addition to the family of Princess Charlotte (though HM does not mention her by name). HM also talked about Malta, the anniversary of the end of WWII, and mentions the world having “to confront moments of darkness this year”. You can read her speech here or watch the video of her speech below.

This year, HM chose three photos: A casual photo of her and Philip; a wedding photo of Charles and Camilla; and a photo of William, Kate, George, and Charlotte from Charlotte’s Christening. So the present monarch, and three (possible) future monarchs (plus spouses and an extra kid). HM also wore an aquamarine brooch that used to belong to the Queen Mother. 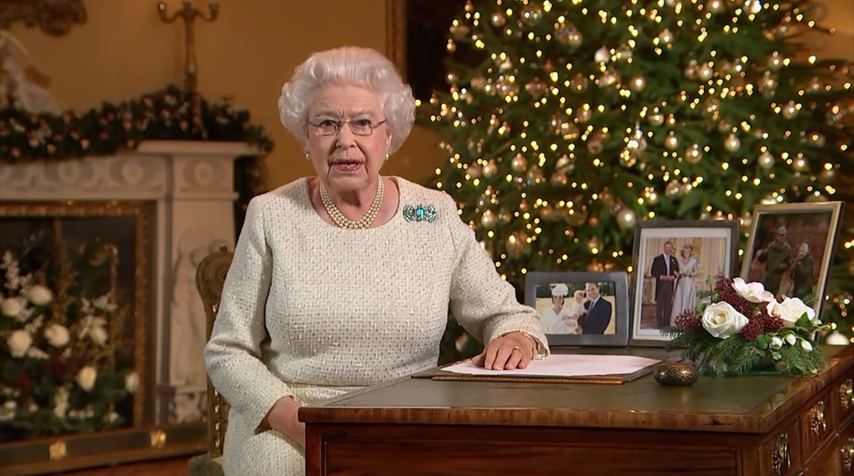 320 thoughts on “British royals walk to church on Christmas”