In a continuation of my year end review, here’s a look back at some of my favorite fashion choices from some of the non-Kate ladies I’ve covered.

Though not everyone was sold on Crown Princess Victoria‘s purple By Malina gown from the Nobel Prize Awards ceremony in December, this one was my favorite from her all year. That red gown from last year still tops my all time favorite looks of hers, but this one is definitely top 3 or 4.

Princess Madeleine didn’t have a ton of opportunities for fashion moments this year as she wasn’t out much, but when she was out she looked pretty great (most of the time). Two of my favorites were her Fadi El Khoury gown she wore at the Nobel Prize Awards in December and her Valentino gown she wore to Prince Nicolas’ Christening in October.

While looking back over Princess Sofia‘s sartorial choices from the past year I noticed that she chose a lot of black and blue this year. I hope that stops. Anyway, I thought about choosing Sofia’s wedding dress as her best this year, but I went with this blue Zuhair Murad dress instead that then-Sofia Hellqvist wore to her pre-wedding dinner on June 12. 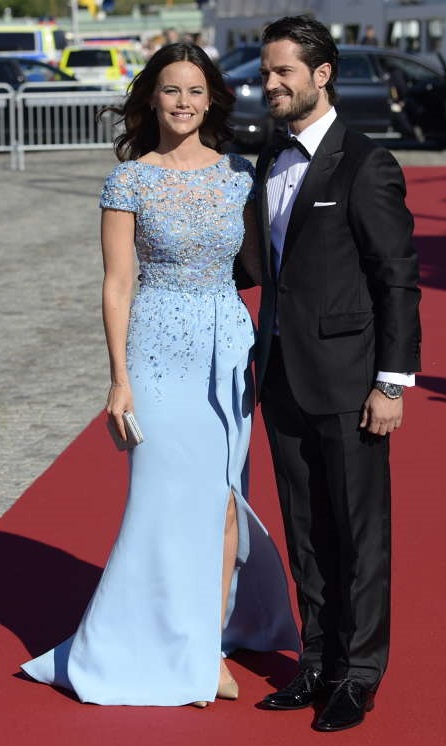 Camilla, Duchess of Cornwall wore several pretty outfits this year as well as lots of bling (with five different tiara events). But my favorite outfit from Camilla this year has to be this grey dress she paired with the Greville Boucheron Honeycomb Tiara and the pink topaz and diamond pearl choker with matching earrings she wore to the Commonwealth Heads of Government Meeting in Malta in November. So pretty. Also, bonus QEII.

Sophie, Countess of Wessex is one of the few ladies whose best look of 2015 is not a gown. Sophie wore this red Dior cocktail dress while giving a speech at the 100WHF Foundation’s Next Generation initiatives gala fundraiser in NYC in November.

Queen Maxima repeated two spectacular gowns she first wore for King Willem-Alexander’s inauguration celebrations in 2013. The first, worn in April to the Dutch State Visit to Denmark, is this blue, embroidered Jan Taminiau gown worn with the Dutch Sapphire and Diamond Tiara and sapphire jewelry. The second is this red embellished Jan Taminiau gown she wore to Prince Carl Philip’s wedding in June. Though I prefer the red dress, I couldn’t pick just one of these dresses as they are both beautiful.

Queen Letizia wore this gorgeous midnight blue tulle ballgown from Felipe Varela during the State Visit to Spain from Peru in July. Letizia tends to favor clean lines and less frilly clothes so seeing her in a giant ballgown was a pleasant surprise. And of course the tiara always looks good.

Queen Mathilde wore this pink, one-shoulder Armani Privé gown during a State Visit to Poland on October 13. She paired the gown with two different tiaras: the Wolfers Necklace Tiara (as a tiara) and the Laurel Wreath Tiara (as a necklace).

Crown Princess Mary‘s repeated Birgit Hallstein gown from Queen Margrethe’s 75th birthday gala dinner on April 15 is one of my favorites of the year. It’s very fairy tale to me, which I like.

Princess Charlene went with a red Valentino jumpsuit for the Monaco Red Cross Ball on July 25 – upping her fashion game at this event tremendously from the previous year. Charlene looks good and I have to give her props for bucking the traditional dress and going with a jumpsuit for a black tie gala.

The final few ladies are honorable mentions because they’re people I don’t usually cover. The first is Queen Margrethe in this red gown from her 75th birthday gala dinner on April 15. This dress is beautiful, even if the top is a bit busy.

The second honorable mention is Hereditary Grand Duchess Stephanie in this yellow Paule Ka dress at the Luxembourg National Day celebrations in June and it’s one of my favorite looks from her. It’s highly probable that my love of this dress is due solely to the fact that it is yellow, but whatever the reason, it’s my favorite 2015 look from her.

The third and final honorable mention goes to Princess Tatiana of Greece who wore this light blue Celia Kritharioti Haute Couture embroidered off-the-shoulder gown to Prince Carl Philip’s wedding in June. She and Max were my best dressed of that event. I never cover Tatiana, but I wanted to include this dress because I really like it.

In terms of who looked best out of everyone, I’d have to go with Max in that red Jan Taminiau gown from Prince Carl Philip’s wedding. Absolutely gorgeous and out of all the fashion all year long it’s the one I remembered the most.

What do you guys think? Do you agree or disagree with my choices? Are there any stand out looks I missed?