Do you guys remember when Duchess Kate wore bright pink to the September 11 Memorial the day after she wore black to wrap Christmas presents with kids in December 2014? And do you remember how the Kate-stans defended that decision by pointing out that The Queen and Camilla also wore shades of pink to the September 11 Memorial (which I’m having trouble finding photos of)? Well, Sophie, Countess of Wessex don’t roll like that, yo. Sophie wears navy when visiting a site in memory of one of the worst tragedies on US soil in history.

Sophie laid flowers on the memorial (her note reads: “In memory of those who lost their loves so tragically. Sophie”) before touring the museum yesterday, November 11th. She stopped at the quote from Virgil’s The Aeneid (which reads: “No day shall erase you from the memory of time.”), she signed the registry, and viewed the artifacts left over from the tragedy.

Sophie also visited the Queen Elizabeth II September 11th Garden at Hanover Square (in memory of the 67 British men and women who died that day) where she laid a wreath in observance of Veterans Day.

It was announced on November 3rd that Sophie has become the new Global Ambassador of 100 Women in Hedge Funds’ Next Generation initiatives. You know 100WHF as the event where Kate wore that horrible Erdem monstrosity. She also attended the event in 2013.

Sophie will serve as Global Ambassador for the next three years. As Global Ambassador, Sophie will “serve as an advocate for increased diversity in the financial services industry, and for raising the industry’s visibility and appeal as young women consider career paths. Additionally, she will participate in conversations in which she can share 100WHF’s global knowledge of best practices around cultivating interest and engagement from the next generation of women entering the industry.”

The Next Generation initiative “aims to provide an educational and social forum at which aspiring women can build lasting, synergistic relationships through an open dialogue about the current interests and challenges of both working women and hedge fund professionals.”

Sophie attended three events for 100WHF while in NYC. On November 10th, Sophie attended the 100WHF 500th education event at which the New York Gala honorees shared their perspectives in a panel discussion on Shareholder and Corporate Governance practices.

Sophie wore an orange fitted, T-shirt sleeve dress from Victoria Beckham that cost £1,450.00. It boggles my mind how a dress that simple could cost that much. Is the Victoria Beckham name really that important to spend that much on such a simple dress? 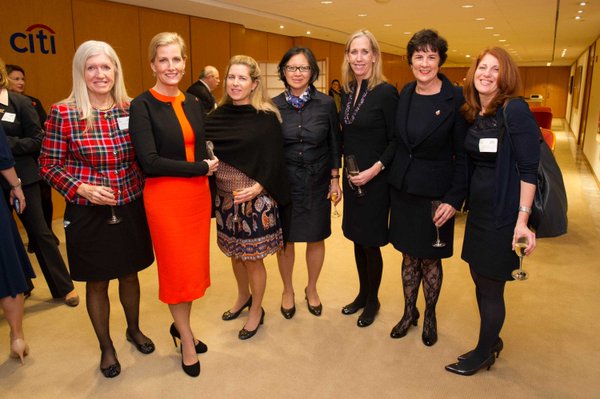 Before heading to the September 11 Memorial, Sophie attended the 100WHF Next Gen breakfast discussion with young women currently in the industry. 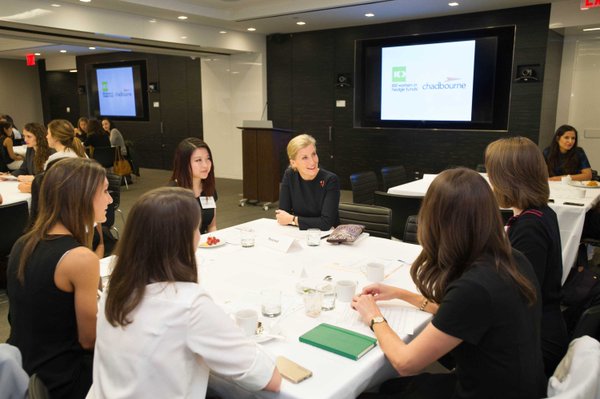 The evening of the 11th, Sophie attended the New York Gala fundraiser where they raised money for 100WHF Foundation’s Next Generation initiatives. Sophie gave a speech at the event. I have not been able to find a video or a transcript of her speech as of time of posting. If I find one later I will update the post.

“By sharing good practice and supporting the next generation we will effect change across the board. One day gender balance will become a non-issue and we will celebrate successful young people regardless of sex. Congratulations to this year’s Awardees for using their success to encourage others to aspire to wanting more.”

UPDATE AGAIN: 100WHF who posted the transcript of Sophie’s speech. Sophie talks about gender inequality and how her time as a professional businesswoman gives her more of an appreciation for the corporate world and people in it to whom she is addressing. Sophie said in part:

“Like many of you here tonight, I am a rare breed! You are rare because of the imbalance of gender across your industry, which is of course why 100WHF was created. I am rare because I am one of the few ladies in the British royal family who has had a professional business career and their own company. So perhaps I am able, through my own experience, to have a deeper appreciation of the corporate world and what it is like to have to climb the career ladder. […]

“I hope that through my role with 100WHF I will be able to help shine a light on issues for women working in the financial sector while proactively promoting examples of good practice in the hope of inspire others to do more to encourage and support their female employees. […]

“But of course it is all very well encouraging the next generation to aspire to greater things without showing them that it is possible to get ahead, to be successful and not to have to do it at the expense of everything else life has to offer. So what better way to inspire them than to show them shining examples of others who have already done it.

“The annual Leadership Awards gives us the perfect opportunity to pay tribute to some very inspirational women who are playing a vital role in keeping public companies accountable to shareholders through their leadership in governance at the firms they work for. In fact they are exactly the kind of women who form my Women’s Network Forum in the UK, so I know just how committed they are to supporting and inspiring our young women of the future.”