Yesterday, July 5, Princess Charlotte was Christened at St. Mary Magdalene Church on the Sandringham estate in Norfolk. Prepare yourselves, this post is going to get long.

Prince William and Kate Middleton, Duchess of Cambridge, walked with their children from Sandringham house to the church. Prince George, in another SWF outfit, held his dad’s hand, while Charlotte was pushed in a Millson pram previously used by the Queen for Prince Andrew and Prince Edward. Apparently there were a good 3,500 people who turned up to watch them walk to church.

The Archbishop of Canterbury, the Most Reverend Justin Welby, baptized Charlotte with the support of The Reverend Canon Jonathan Riviere, the Rector of the Sandringham group of parishes.

William and Kate chose two hymns, one lesson, and two anthems for the service. The hymns: Praise to the Lord, The Almighty and Come Down, O Love Divine. The lesson: Matthew 18, verses 1-5, read by James Meade. The anthems: I Will Sing With The Spirit and God Be In My Head.

[George peeking into the pram to see Charlotte – how cute!]

Following the 30 minute service, the royals, Middletons, and godparents walked back to Sandringham house were they had a tea and were served slices of “christening cake”, which is in fact a tier taken from William and Kate’s wedding cake. So they were served four year old cake. That’s… gross.

So enough about Charlotte, let’s get into the Single White Female-ing portion of the post. Prince George wore a red Rachel Riley “Smocked Set” (£85.00). I’m shocked he wore red and not blue. I voted for blue in the last poll as did a whopping 72.8% of you guys. 18.41% of you voted for white, and only 1.98% of you voted for red. 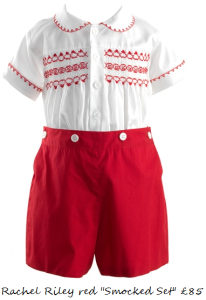 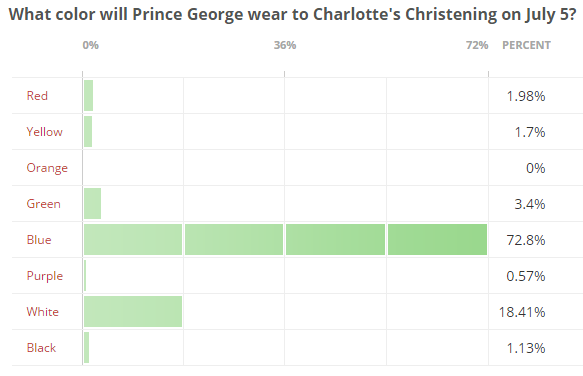 The problem with George’s red outfit, though, is that William and Kate are Single White Female-ing Princess Diana AGAIN by dressing George in a red outfit that is SO similar to the outfit William wore to visit Prince Harry in the hospital that many people thought it actually was the same outfit.

Along with George’s outfit, the venue, music, godparents, the official photographer, and even Charlotte’s middle name are all laden with Diana-inspiration. Enough with the SWF-ing already, William and Kate, it’s getting creepy now.

[George talking to the Queen]

Oh, and speaking of SWF-ing, I noticed this the other day. Is it my imagination or did William and Kate SWF one of William’s Christening photos for one of George’s Christening photo? Complete with mother looking lovingly at son and father looking pensively from over the top of the baby’s head. Too bad George’s photo is so devoid of color.

For the Christening, Kate chose her go-to designer for big events, Alexander McQueen. Kate wore a bespoke white McQueen coatdress. The poll for Kate’s color choice was not as close as George’s, with 57.75% of us thinking she’d choose white (or cream), and 20.36% thinking pink. 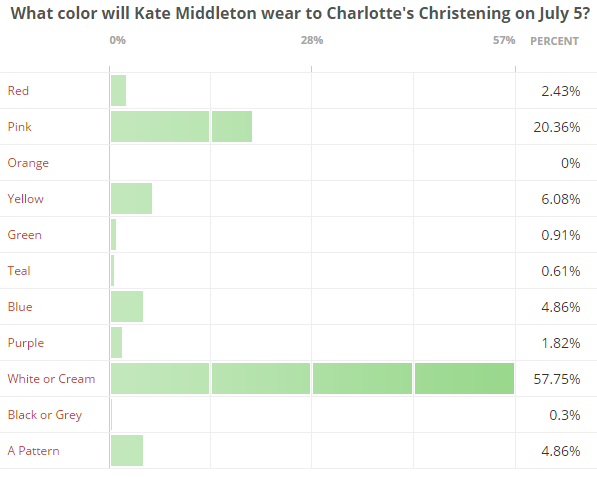 I’m not going to lie, this is not my favorite McQueen piece in Kate’s wardrobe, but it’s certainly not my least favorite piece and I will give Kate props for thinking outside her comfort zone and choosing a different neckline.

[Aw, the Queen is smiling – how lovely]

Kate wore a white bespoke Jane Taylor hat which I actually rather like. Kate wore her Mappin and Webb “Empress” necklace and debuted the matching “Empress” earrings (£3,450.00). She also wore her Russell & Bromley 5th Avenue nude patent pumps, and her Cartier watch. 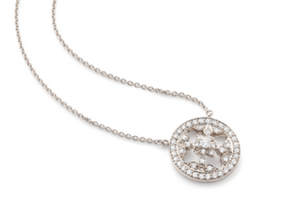 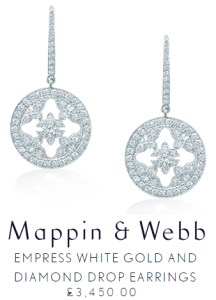 Now for the guests:

Camilla wore light blue, which is a color she’s been favoring lately. She wore her pearl and diamond earrings she wears so often, along with her four strand pearl choker with diamond clasp. Poor Camilla suffered a wind incident on par with Duchess Kate’s previous incidents. Out of respect to Camilla I don’t want to post the photo, but because I want to keep things fair and because I’ve posted many of Kate’s wind incident photos, I must post Camilla’s. Sorry, Camilla. Weight your hems next time.

Carole wore a beige-ish color coat and dress and matching hat. BTW, this photo of Carole smiling at George kind of creeps me out. I’m not sure why.

Pippa wore white Emilia Wickstead and a white bespoke Jane Taylor hat. Pippa’s outfit is similar to Kate’s in color and fit-and-flare style. Not going to lie, I actually prefer Pippa’s, but that’s just me.

Princess Charlotte made the front page of several newspapers: 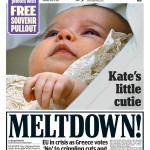 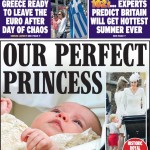 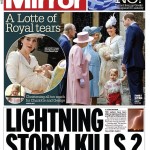 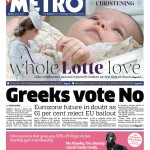 Apparently there were only 4 professional photographers allowed in to the paddocks to take photos and the royal photographers are not happy about it. According to them (via Mark Cuthbert), “the gloves are off now”.

I think it’s ridiculous that KP was willing to let thousands of well-wishers, all with cameras on their phones, into the paddock to see the royals, yet limited the number of actual photographers to four. 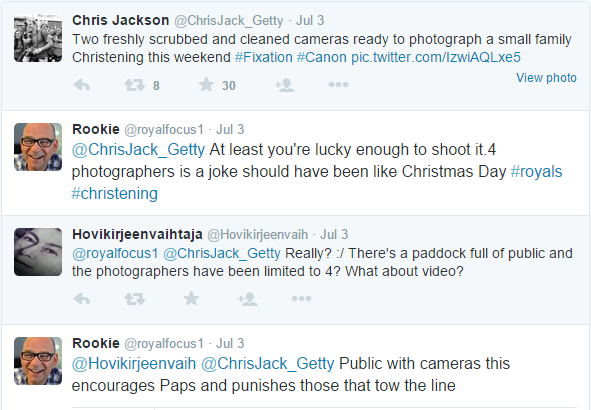 Links: Daily Mail for lots of photos. Telegraph for just how much Diana inspiration there was. Express.