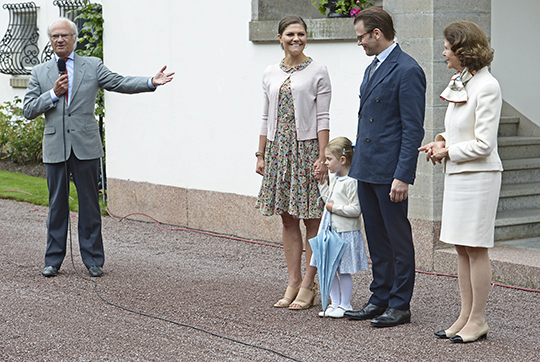 Crown Princess Victoria celebrated her 38th birthday yesterday, July 14. Victoria celebrated Victoriadagen (Victoria Day) by greeting a crowd of more than 3,000 people outside Solliden Palace on Öland where King Carl XVI Gustaf led cheers and a sing-a-long of “Yes, May She Live”. Prince Daniel, Princess Estelle, and Queen Silvia joined for the greeting outside Solliden. They then of course met the crowd. 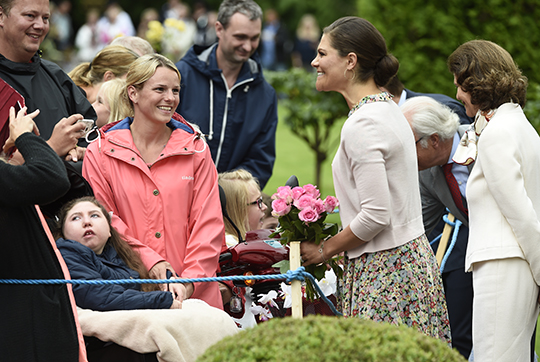 Victoria wore a floral Ralph Lauren dress – the Marie Short Sleeve Casual Dress. Over her dress she wore what looks like the exact same pale pink cardigan she wore to Victoriadagen last year.

Estelle wore a similar outfit to her mom, opting for a light blue floral dress with a similar Peter Pan collar, an off white cardigan, and a blue bow in her hair.

In the evening, Princess Madeleine, Chris O’Neill, Prince Carl Philip, and Princess Sofia (formerly Sofia Hellqvist) joined the rest of the family (minus Estelle) for a carriage procession from Solliden to Borgholm where there was a concert.

While at Borgholm, Victoria presented the Crown Princess Victoria Scholarship to swimmer Sarah Sjostrom. Sjostrom received the scholarship because in 2014 she beat three world records and won 6 gold medals and 5 silver medals in competitions. 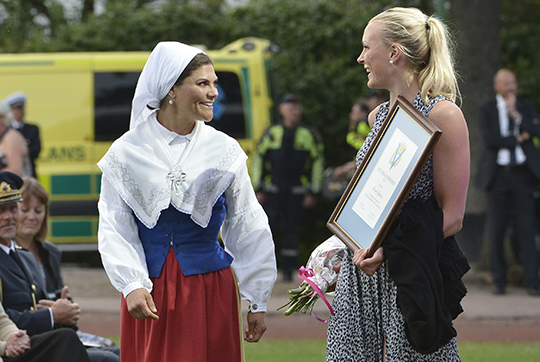 Both Victoria and Silvia wore the traditional dress.

While Maddie and Sofia opted for normal clothes. Madeleine, making her first appearance since giving birth to Prince Nicolas on June 15, wore a puffy jacket and some yellow patterned pants. I may be a Madeleine-apologist, or just a yellow-apologist, but I surprisingly don’t hate these pants. I would wear these pants. Maybe not out, but definitely around the house.

Sofia, coming back from her honeymoon, wore a black and white Karen Millen dress.

While doing the greeting outside Solliden Palace, guess who stole the show? That’s right, the adorable Princess Estelle (and her dog).