Lots of tiaras popped up this week, so let’s take another Grand Tiara Tour of Europe on this Friday evening. Queen Elizabeth paid a State Visit to Germany with a State Dinner on the second night giving us lots of jewels and a tiara; Queen Maxima and other Dutch royals held a reception for the diplomatic corps and popped up in tiaras; and Hereditary Grand Duchess Stephanie and the rest of the Luxembourg royal ladies put on the tiaras for National Day celebrations.

Queen Elizabeth and Prince Philip paid a State Visit to Germany this week. I’ll include more photos from that visit in the Round Up on Sunday; this post is just for the tiara appearance. On the second night of the visit, June 24, they attended a State Banquet at Schloss Bellevue Palace hosted by German President Joachim Gauck.

The Queen ruby-ed it up with Queen Victoria’s Crown Ruby necklace, earrings, and brooch. She wore her favorite tiara, the Girls of Great Britain and Ireland Tiara (also called Queen Mary’s Tiara as it was a wedding gift to Queen Mary, wife of George V). HM wore the Order of Merit of the Federal Republic of Germany sash and star (Germany), and the Teck Corsage Brooch pinned to the back of her sash to keep it in place.

Maxima wore an orange lace Valentino gown repeated from 2002, which actually looks very beautiful. One of my favorite gowns from Maxima. Max wore Queen Wilhelmina’s Ornate Pearl Tiara (also known as the Württemberg Ornate Pearl Tiara, though it has no connection to Württemberg which is why I’m leaving it out of the name). Maxima also wore a pearl brooch and earrings, and no orders.

Beatrix wore a blue dress with really poofy sleeves, and the Diamond Star Button Tiara (the stars can be changed out for pearl buttons).

Margriet wore the pearl version of the Dutch Emerald Tiara.

Queen Maxima in a tiara at diplomatic corps gala http://t.co/9D5uq8M6hl 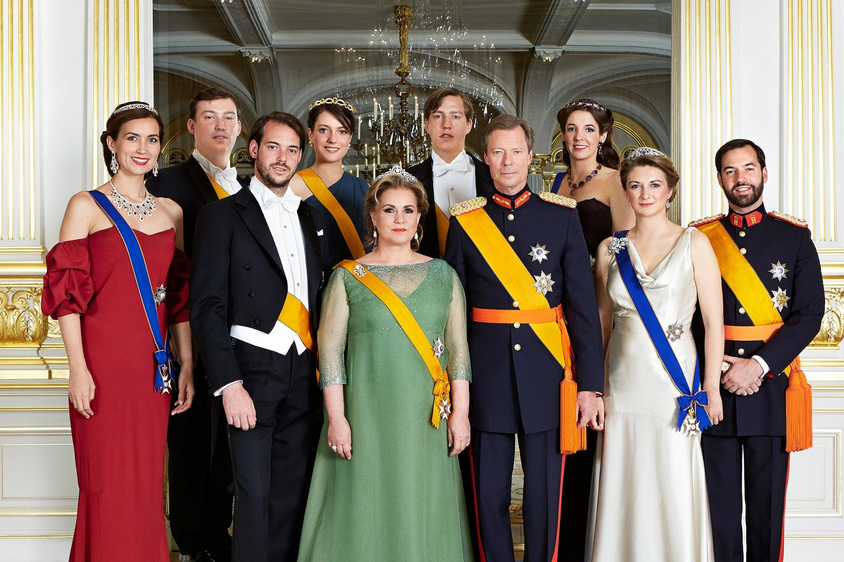 Luxembourg National Day celebrations took place this week. As with QEII’s State Visit, I will cover more of the Lux National Day celebrations later, this is just for the gala reception held on June 23. The Grand Ducal Family hosted members of the government, heads of the administration, and foreign ambassadors, and the royal ladies showed up in their gowns, tiaras, and orders.

**The following positions are based on the above photo.

Grand Duchess Maria Teresa (front row center – wife of Grand Duke Henri) wore a green dress and the Belgian Scroll Tiara (a diamond tiara with crescent, palmette, and scroll motifs), pearl earrings and brooch, and the Order of the Gold Lion of the House of Nassau sash and star (Luxembourg).

Hereditary Grand Duchess Stephanie (front row right – DIL, wife of HGD Guillaume) wore a slinky silver dress and the Grand Duchess Marie-Adelaide Tiara (a sapphire and diamond tiara with leaves and berries motif), and the Order of Adolphe of Nassau sash and star (Luxembourg). PS. I’m surprised Guillaume and Stephanie have not announced a pregnancy yet. They got married in 2012.

Princess Claire (front row left – DIL, wife of Prince Felix) wore an off-the-shoulder red dress which would have looked much better without the puffy sleeves, and some major ruby and diamond jewelry that includes earrings, necklace, and bandeau tiara. She also wore the Order of Adolphe of Nassau sash and star (Luxembourg).

Princess Alexandra (back row left – daughter) wore a blue one-shoulder gown and the Citrine or Topaz and Pearl Tiara. She also wore the Order of the Gold Lion of the House of Nassau sash and star (Luxembourg). 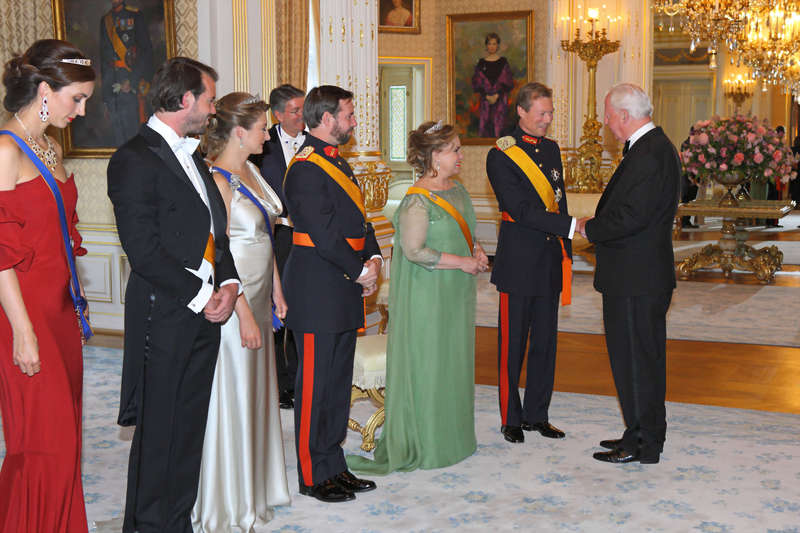 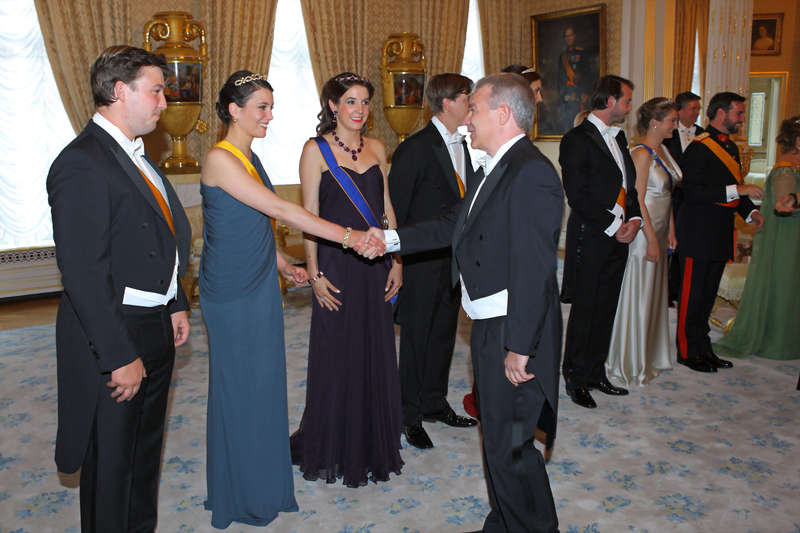