Even more photos of Prince George at a farm park have come out, this time of him sitting on Carole Middleton‘s shoulders as they walk to their car. The two were spotted at Bucklebury Farm Park in Berkshire sometime last week. 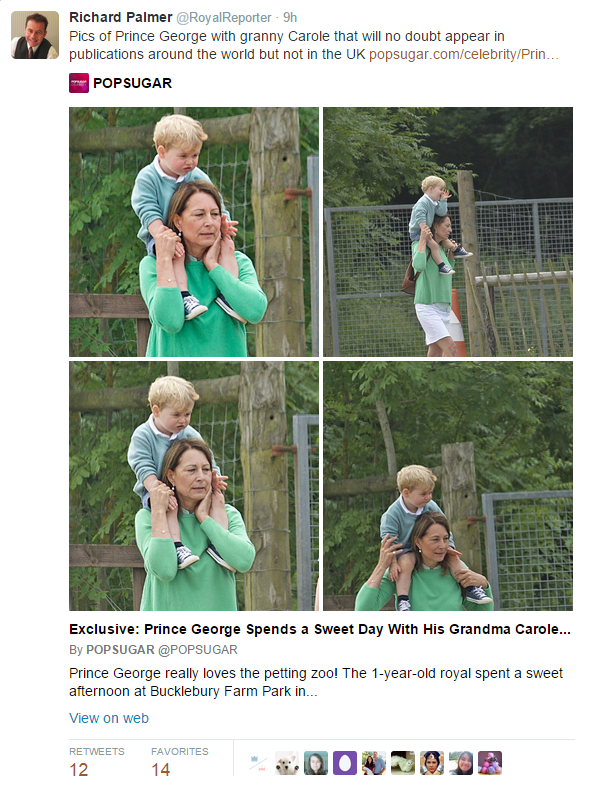 All in all the upkeep for William, Kate, and Harry (which Charles pays for) cost £2.9 million (~$4.6 million*). Though we have no idea how much of that went to things like Kate’s clothing and how much went to Harry v the Cambs. Why you ask? Because KP said they “can’t identify how much of it is allocated to their office” and they cannot break down specific costs. Which is either 1) utter BS, or 2) due to REALLY bad bookkeeping. If they are bookkeeping properly they should know exactly how much is allocated where, so either they have the world’s worst accountants or they are lying.

Apparently Will and Kate’s personal staff – including Nanny Maria and that new housekeeper Sadie Rice – is not paid out of that 2.9 million. But Charles has to pay for those people as well, even if it’s “privately”. Will and Kate don’t have the income to pay for them (unless Will is using his Diana inheritance, but I highly doubt that when there’s the Bank of Daddy to rely on).

In other royal finance news, Buckingham Palace is in need of £150 million worth of urgent repairs, to the point the Queen may have to move out.