Here is a post with some British Royal Family bits and bobs. Lots of royals in this post, including but not limited to: The Queen, Prince Harry, Prince William, Camilla Duchess of Cornwall, and Sophie Countess of Wessex. Also, some Kate Middleton-related articles at the end.

On Monday, June 15, the Queen, Prince Philip, Prince William, and Princess Anne were in Runnymede to attend a service to mark the 800th anniversary of the signing of the Magna Carta by King John on June 15, 1215.

Also on Monday, the Queen and members of the royal family attended the Order of the Garter ceremony at Windsor Castle. Some of the British royal family members of the Order are: Prince Philip, Prince Charles, Prince William, Prince Andrew, Prince Edward, and Princess Anne. As mentioned in the Kate post on Monday, Kate Middleton did not attend Garter Day as she has every year that she has been married (except 2013 when she was 8 months pregnant). However, Camilla, Duchess of Cornwall and Sophie, Countess of Wessex both showed up to watch the procession. Camilla wore a repeated white outfit and a Philip Treacy hat. Sophie also repeated a dress, her Suzannah Silk Gazar 1950s influenced Midi dress she wore in Guernsey and Jersey on May 10 to celebrate VE Day. Sophie repeated her hat, too. Her black Jane Taylor hat she wore to the reinterment ceremony of King Richard III in Leicester on March 26.

Tuesday, June 16, was the first day of Royal Ascot. Lots of royals came out (but not William and Kate – they have never attended Ascot): The Queen, Philip, Charles, Camilla, Prince Harry, Andrew, Princess Beatrice, Edward and Sophie, Anne, Zara Phillips Tindall, Peter and Autumn Phillips (among others). The Queen wore neon pink Peter Enrione with an Angela Kelly hat with a ruby brooch, Camilla wore mint, Sophie wore white Emilia Wickstead and Jane Taylor, Zara wore yellow Paul Costelloe and a bespoke Rosie Olivia hate and snakeskin heels (that seem far too small), and Autumn wore black and white. Harry sported a top hat and tails, and a new waistcoat. He has worn the ugly yellow waistcoat for years, but for Ascot he sported a nice new navy one. UPDATE: Apparently there were pregnancy rumors started due to Zara’s yellow dress. But her spokesman debunked those rumors. I would be shocked if Zara got pregnant between now and the end of 2016. She has stated before, and reiterated in the new statement, that she fully intends on going to Rio for the 2016 Olympics. /UPDATE

Prince Harry got to ride in the carriage with HM, Philip, and Andrew.

Prince Charles smiling as he chats to Harry. 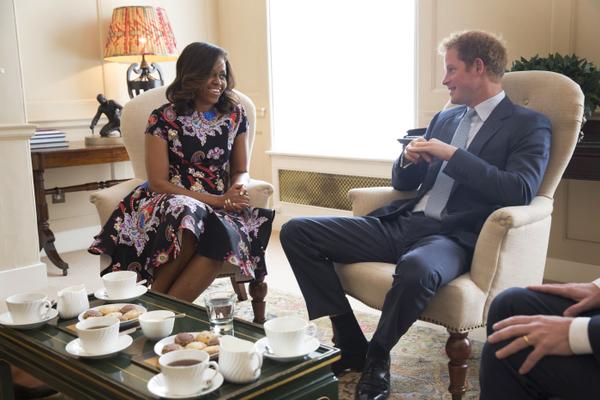 Also on Tuesday, The British Monarchy YouTube page released a video message from William and Harry to celebrate and congratulate the 2015 Queen’s Young Leaders winners. William and Harry launched the Queen’s Young Leaders program in July 2014. Thoughts on the video: 1) Harry looks hot in a white button down; 2) William is really balding, like a lot; 3) William’s furrowed brow of “I’m really caring right now” gets on my nerves, he does it often and so does Kate, it is really fake and annoying.

Keeping with William, he (and presumably Kate and George, and Princess Charlotte and Nanny Maria must have been there, too) stayed at Highgrove (Prince Charles’ country home) over the weekend and into Monday. William needed to be in Windsor on Monday for the Magna Carta ceremony. The distance was only 80 miles, and would have taken about 90 minutes by car, but instead William took one of the Queen’s helicopters for the journey. Later in the day, William took the helicopter back to Highgrove. To charter a similar helicopter for the trip would cost about £8,000. Dear William, if a pregnant Duchess Kate suffering from “Hyperemesis Gravidarum” can travel over an hour by car from Bucklebury to London (in December 2012), you can travel by car the 90 minutes from Highgrove to Windsor. [Express]

A Kensington Palace spokesman spoke to People about their social media accounts, following their release of the first photo of Princess Charlotte and Prince George together on June 6. The spokesman said: “We feel it is really important that we are able to have an interaction with people and share news with them directly.” The spokesman stressed that William, Kate, and Harry are operating as a “household” and while Harry has sent out tweets from their office’s account in the past, William and Kate have “no current plans” to use any of their social media accounts themselves. [People]

In Kate news, Kate went shopping – shocker! Kate went shopping in early June to a café and farm shop in Holt, near Anmer Hall, where she bought sweets for George. One of the staff said: “If you didn’t know who she was, you would never know. She’s incredibly down-to-earth, very gracious and extremely polite.” I could criticize this and say that the bar is so low for Kate that her bring polite is a big deal, but I won’t for two reasons. 1) I understand when dealing with royalty or celebrities that them being polite is a bit of a shocker, since most people probably assume royals and celebs are snobby a-holes; 2) I’ve worked in retail, not everyone is nice, and it is actually worth mentioning when you get a really nice customer. [People]

You know how Kate and William put out an ad seeking a new housekeeper for Anmer Hall? Well that position has finally been filled after three long months of searching. Will and Kate have hired 33-year-old Sadie Rice, who used to work for Crown Prince Haakon and Crown Princess Mette-Marit caring for their children, and previously worked as a maid in Buckingham Palace. [Hello]

UPDATE: According to People, Kate hired a super expensive celebrity trainer to help her throughout her pregnancy and after stay and get back in shape. The trainer is “super discreet” (though someone is spilling to People) and checks in with Kate via phone every day and visits her in person once a week. Um, okay. I mean, I totally understand wanting a personal trainer. If I could afford it, I would work out with a personal trainer every single day. It’s the same with the personal chef thing, if I could afford it I would totally have one. I guess the issue is that Kate herself can’t really afford anything and this trainer is being paid for buy Charles (presumably). [People] /UPDATE

A week ago, Prince Charles hosted a tea party at Clarence House for WWII pilots. Charles spoke of Princess Charlotte, saying she sleeps through the night already and is a much better baby than Prince George. [Mirror]

Keeping on the Charles train, a new photo of Prince Charles playing with Prince George emerged. Question: Does this means that Charles sees George way more than we think he does, OR was this new photo taken on the same day that the other previously unseen photo of Charles and George that was spotted behind Charles in a video he released in March. They are both wearing the same clothes. 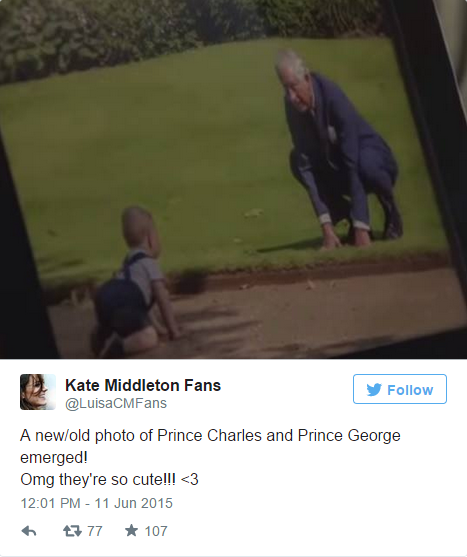 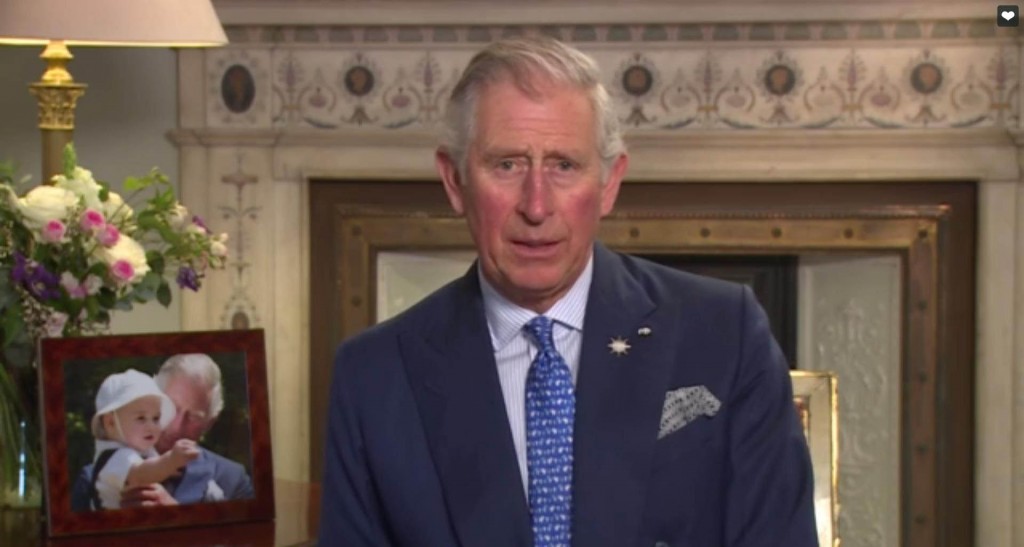 I’ll leave you with more Prince Harry because… do I need a reason?