You know how people get on Prince William‘s backside when he supports the fight against the illegal wildlife trade only to then go boar/pheasant/deer hunting? Well people get on Prince Charles‘ backside, too, about his love of blood sports, all the while campaigning for the environment. Blood sports aren’t just for Charles and William, the entire British Royal Family likes hunting. And now Prince Edward‘s love of the sport has gotten himself into trouble as well.

We’ll start with Edward, since his hunting is causing the most controversy at the moment. Prince Edward was out hunting at Sandringham yesterday, and was photographed shooting over his six year old son, James, Viscount Severn‘s head, breaking one of the most fundamental rules of gun safety – never point your gun toward another person. The Sunday Express is freaking out, and other papers have followed their lead. Sophie, Countess of Wessex and Lady Louise Windsor were also on the hunting outing with Edward and James, though they are not pictured. 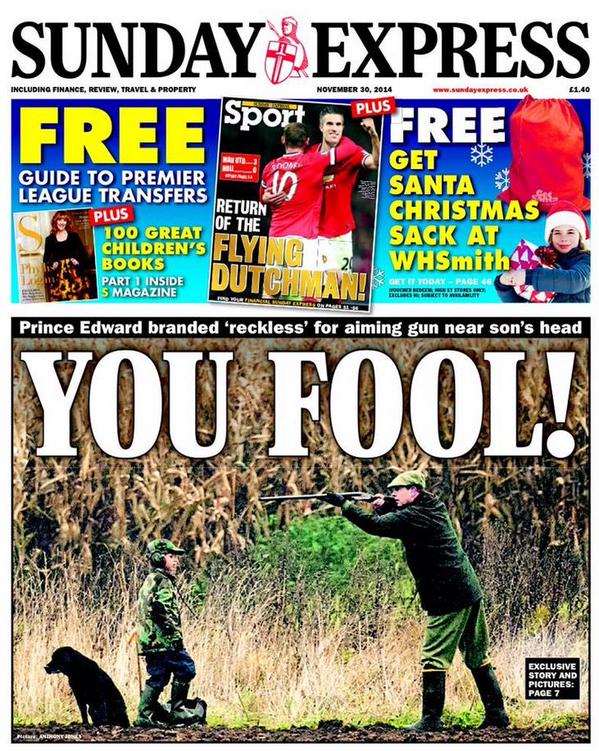 Edward’s pictures come hot off the heels of Prince Charles trying unsuccessfully to get pictures of him hunting at Sandringham blocked by the media. Clarence House issued a missive to the press on Friday urging them not to publish the photos, but the press gave no sh-ts and published the photos anyway. It seems that the press is pushing back after all the times the royals, especially William, have tried to control them recently.

Though according to Niraj Tanna, the Queen did get photos of Charles, William, and Prince Harry shooting on Boxing Day 2013 blocked from publication. So last Christmas, not even a year ago, the press were minding what they were told re shooting pictures, but now all bets are off.

These two incidents cover two controversial issues we’ve been following for a while now: royals trying to control the press; and royals participating in blood sports while campaigning for wildlife charities.

I don’t think there is an argument re trying to control the press. We all pretty much agree that it is BS. But there is an argument re the blood sports. Can one reconcile shooting for sport with campaigning for wildlife charities? Some would say no, and some would say yes, due to the different types of animals being killed and the legality of each. No matter which side one falls, I do think it’s a bad move for the royals to participate in blood sports at all, because there are a lot of people who disagree with it. The last thing the royals need is one more easy thing for the public to dislike them for.

Back to Edward. Now, I do think these photos may be a bit misleading. We are seeing a three dimensional scene compressed into two dimensions, which means the perspective is off. James could be yards to the side, well out of harms way, but we would not know due to the compressed perspective. Either way, though, I think this was a dumb move on Edward’s part. Not only should be know better than to point his gun anywhere remotely close to another person, he should be teaching his son to get the h-ll out of the way of people shooting if he’s going to be tagging along. These pictures wouldn’t have even been able to happen – compressed perspective and all – if James had been well behind Edward in the first place. Not that I’m blaming James here, I think Edward deserves most of the blame for not making sure and/or teaching is son to be well behind anyone holding/aiming a gun.

These two shooting kerfuffles come mere days after Prince William attended the Tusk Trust Awards to present awards to Richard Bonham and Herizo Andrianandrasana. Here are some photos I never got around to posting.