Tiara-mas came early, you guys! I was expecting to have to wait until December 10th to see some magnificent tiaras adorned atop royal heads, but Camilla, Duchess of Cornwall gave me an early present! Yay! Camilla is a girl after my own heart. She loves big jewelry and tiaras just like I do; so unlike some other royals, she doesn’t skimp on the jewelry. She always brings the jewelry. And unlike some other royals, Camilla can pull off some big jewelry without it overpowering her, or looking cheap or clownish.

#Camilla Duchess of Cornwall resplendent in a tiara attends a diplomatic reception at #BuckinghamPalace #Royals pic.twitter.com/o4xv9zH1nl

Last night, Camilla, along with Prince Charles, attended a reception at Buckingham Palace for members of the diplomatic corps. Kate attended this reception last year, wearing the Lotus Flower Tiara. Kate wasn’t there this year – not surprising – so Camilla tiara-ed up for us. She wore her family tiara, the Cubitt-Shand Tiara. Camilla also wore diamond earrings and a pearl choker.

Charles & Camilla at Diplomatic Reception, wearing the Cubitt-Shand Tiara (her family’s own)! – (from @royalfocus1) pic.twitter.com/ZBPDAilcHG

The Cubitt-Shand Tiara is a floral/nature motif that originally belonged to Camilla’s maternal grandmother, Sonia Rosemary Cubitt, Baroness Ashcombe (née Keppel). Camilla wore this tiara for her first wedding to Andrew Parker Bowles in 1973, and her daughter, Laura, wore it for her wedding to Harry Lopes in 2006. 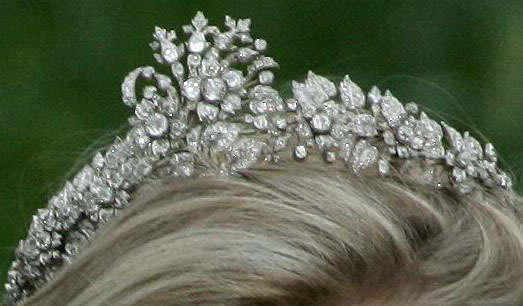 The Cubitt-Shand Tiara is not my favorite tiara that Camilla has worn. I feel like it’s too small for her. Camilla can WORK a large tiara. My favorite that Camilla has worn is the Boucheron Honeycomb Tiara. It’s so big, but it fits her head and hair perfectly.  It would completely overpower anyone else – like Kate or Sophie – but it just works on Camilla.

*The picture below offers a better look at Camilla’s earring she wore last night, too.