Kate showed up for Trooping the Color

Trooping the Color went down yesterday.  It marks the Queen’s official birthday—not her actual birthday, which was in April.  Trooping the Color originated as a means to show soldiers their regiment flag, so they would recognize their flag while in battle.  This was called, “trooping”, where they carried the flag down the ranks to show everyone.  In 1748, they announced it would also mark the Sovereign’s official birthday.  The flag being trooped this year was the flag of Nijmegen Company Grenadier Guards. Afterward, the Royal Family (including the Royal Holy Trinity: Kate Middleton, Prince William, and Prince Harry–they’re the tallest ones out of the whole family) gathered on the balcony of Buckingham Palace for a flypast. 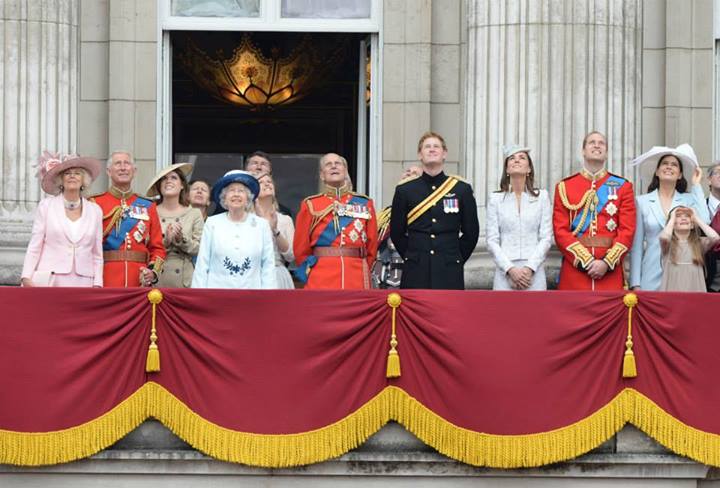 Prince George did not make an appearance.  For some reason people thought he might make a balcony appearance.  The whole family is usually in attendance, including the children, so I guess that’s where the Prince Grumpy Face theory came from, but… let’s be real, he was never going to make an appearance.  I wonder if they will release new photos to mark his first birthday?

On the Prince Ginger front, even though Harry’s “job” is to organize major ceremonial Army events (he quit flying a few months ago to take this desk job), he had no hand in organizing this event.  Does Harry really work at that “job” of his?  Or is it like William’s RAF “job” where he only shows up a few days a month and doesn’t do much? 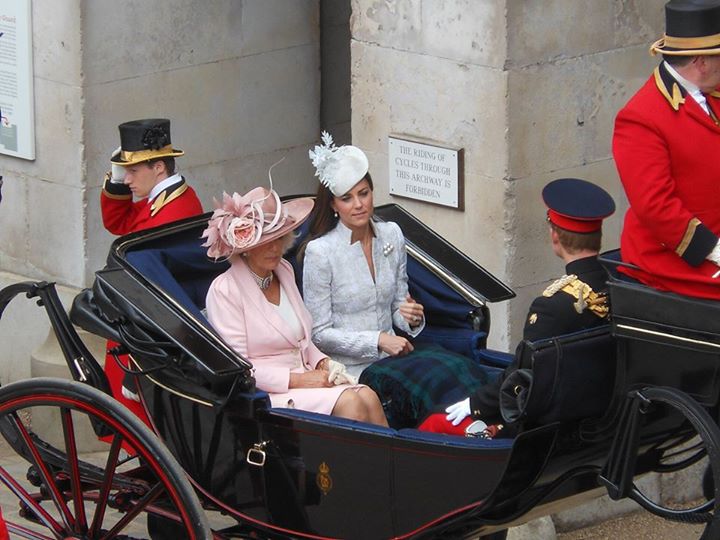 Kate brought out a new skirt suit for Trooping the Color—an ice blue Alexander McQueen skirt suit.  Kate wore a new hat by Jane Taylor in an ice blue with leaves.  It’s cute.  I’m not normally a fan of Kate’s hats, because I’m not normally a fan of hats in general, but this one is cute.  I like the leaves and the color.  Kate carried her McQueen clutch.  I’m not sure why she needed a clutch out on the balcony, but whatever.  I often wonder what Kate carries in her little clutches.  Does she carry anything or is it there for her to have something to do with her hands?  For the events when she doesn’t carry a clutch, why doesn’t she need whatever it is she carries around in there?  I would say it was a security blanket, like her hair, to give her something to do with her hands but then why doesn’t she carry it all the time?  Hm… 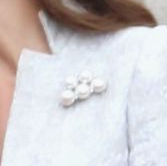 Kate wore her Annoushka pearl drop earrings.  She also busted out a new brooch.  It’s a five pearl brooch, two rows with two on top and three on bottom.  It looks fake; like costume jewelry.  You know, I hate to have to say negative things when Kate does something I’ve asked for, but… sigh.  I did complain that she wears the same pieces over and over again, and it gets boring (she has a bunch of jewelry already she could switch things up with; and she also needs to branch out when buying new stuff—how many citrines and green amethysts does a girl need?), but I don’t like this brooch.  I think it’s because it looks so fake.  So +1 for Kate wearing new pieces, but I’m not a huge fan of this one.

Kate had the sniffles.

In other fashion, Camilla wore a pink Bruce Oldfield jacket and a Philip Treacy hat she previously wore to Trooping the Color in 2010.  She also wore an enormous necklace.  It’s a pink stone surrounded by diamonds with five strands of pearls.  I have to hand it to Camilla, she brings the jewelry. 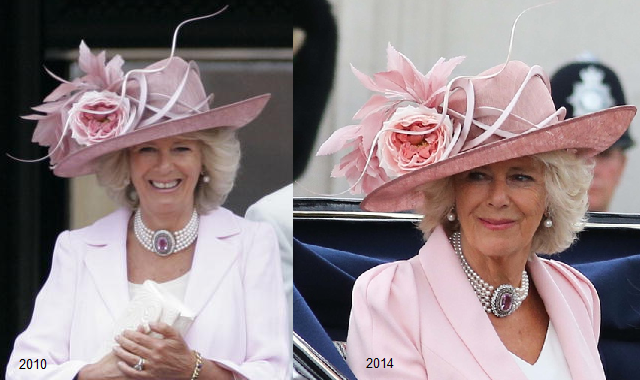 PS. How unfortunate that Kate’s name gets used as click bait for terrible articles.

51 thoughts on “Kate showed up for Trooping the Color”